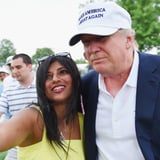 Get the Full StoryDonald Trump is the most important president millennials will ever have. Before you crack your knuckles and jump into the comments section, let me clarify. We've just experienced eight years of social progress, healthcare reform, and compassionate, measured foreign policy under President Barack Obama, whose values reflect America's founding principles and essentially helped to define the millennial generation. Despite this influence, we millennials still have our flaws and, ironically, our current POTUS seems to have adopted our negative traits. Yes, Donald Trump as a millennial is a nightmare of a notion, but it also means that our generation is the best equipped to oppose this enfant terrible.

A millennial is defined as a person born in the 1980s or 1990s, according to Merriam-Webster. Although "millennial" is technically used to set generational parameters, age is hardly the only defining characteristic. Like previous generations, millennials have been shaped by issues such as economic turmoil, been inspired by social upheaval, and been emboldened by unprecedented technological advances. These experiences have given form to a set of traits commonly associated with the millennial generation.

It makes you wonder if he's actually a 25-year-old trust fund baby wearing a man suit.

Donald Trump was born in June 1946, which makes him 70 years old. He's a good three to five decades older than us millennials and the same age as our parents or grandparents, a generation that should have guided and shaped us. Yet Trump's behavior exhibits traits that are so distinctly millennial, it makes you wonder if he's actually a 25-year-old trust fund baby wearing a man suit. What's more, he's only lifted the less flattering traits, leaving the positive, altruistic ones untouched.

Labeled by many as the "Me, Me, Me Generation," millennials are widely known to be entitled, narcissistic, distrustful, and tech obsessed. So is our POTUS. Here are some of the similarities between Trump and millennials and what we can do to redefine our generation.

A recent study by POPSUGAR Insights found that one of the most widely used millennial descriptors, entitled, is such a popular perception that even millennials use it to describe themselves. One of the most noteworthy observations the study made was that, to millennials, "entitled" wasn't necessarily a pejorative; to them, it simply means going after what you want without asking for permission. In other words, millennials feel no obligation to go through authority figures or superiors to attain even the loftiest of goals.

On Jan. 27, Trump signed an executive order banning refugees from entering the US for 120 days and banning citizens from the predominantly Muslim nations of Syria, Iraq, Iran, Sudan, Libya, Yemen, and Somalia for three months. This is one of the most extreme plans for preventing foreigners from coming into the US that this country has ever seen, and Trump felt entitled to "go after" it, reportedly without running the order by the Justice Department.

Xenophobic travel ban aside, feeling entitled is hardly a new sensation for Trump, although being elected to the highest office in the nation will undoubtedly inflate his sense of entitlement to an unthinkable degree. Trump has suffered entitlement nearly his entire life, ever since his father sent him off into the real world with "a small loan of a million dollars," which Trump tone-deafly spoke about at a town hall gathering in 2015.

Of course, being wealthy does not always equate being entitled, but Trump has proved this stereotype time and again throughout his life, even letting it warp into something more dangerous. In October, The Washington Post unearthed a recording from 2005 in which the then-reality TV host said being a celebrity has granted him permission to kiss any woman he wants and "grab them by the p ssy." That's not just entitlement he's displaying, but a troubling lack of respect for women that promotes sexual assault.

Another label millennials have been charged with is narcissism. Time magazine cited data from the National Institutes of Health, which found that 58 percent more college students scored higher on a narcissism scale in 2009 than their predecessors in 1982.

In an interview with the American Psychological Association, Dr. Jean Twenge, author of Generation Me and The Narcissism Epidemic, stated her findings: " Millennials are more likely to say that they're above average compared to their peers and they tend to score higher on other measures of positive self-views, like self-esteem and even narcissism."

Similarly, many psychologists have publicly diagnosed Trump with narcissism, which they say is a mental illness. One in particular, John D. Gartner, told USA Today he thinks Trump has malignant narcissism, which Campbell's Psychiatric Dictionary defines as "a mix of narcissism, antisocial personality disorder, aggression and sadism."

In December, a group of professors from Harvard Medical School and the University of California wrote a letter to President Obama, urging him to order a full neuropsychiatric evaluation of Trump because of the alarming behavior he regularly exhibits. They wrote: "His widely reported symptoms of mental instability - including grandiosity, impulsivity, hypersensitivity to slights or criticism, and an apparent inability to distinguish between fantasy and reality - lead us to question his fitness for the immense responsibilities of the office."

We've seen this grandiosity in his overuse of the words "great," "best," and "tremendous" when describing everything from his forthcoming healthcare plan to his brain. His hypersensitivity to criticism oozes from his immediate and unfailing use of Twitter to respond to his latest critics. And we got a bitter taste of his inability to distinguish between fantasy and reality - and impulsivity - when he sent Press Secretary Sean Spicer, in his first briefing ever, to refute reports of the crowd size at his inauguration. Despite photographic evidence and Nielsen ratings, Spicer asserted that Trump garnered "the largest audience to ever witness an inauguration - period." If that's not the definition of "delusions of grandeur," then I don't know what is.

The upswing in narcissism associated with millennials can be explained in part by the trophy-style parenting that many millennials were raised with that led many of us to believe we're beautiful, unique "snowflakes," as well as the advent of social media and other technologies that have made mass communication and self-broadcasting as simple as pressing a button. It's hardly taboo to accuse millennials of being tech addicts; it's simply a fact.

A whopping 85 percent of millennials use smartphones, according to a 2016 study by research firm Forrester. Another study, by McCann Worldgroup, reported even more astounding findings: 53 percent of millennials would rather give up their sense of smell than be without their tech. Laura Simpson, McCann's global IQ director, explained: "It is the glue that binds this generation together and fuels the motivations that define them."

In fact, the only person who may be more attached to his gadgets and social networks is the Donald, who regularly uses Twitter as his primary means of communication. To date, Trump has tweeted more than 34,000 times. He also has suggested the reason he continues to tweet from his personal twitter account vs. the POTUS handle is because the latter has fewer followers.

As social as millennials are across multiple platforms, however, we are not exactly trusting of other people. According to Paul Taylor, vice president of the Pew Research Center and author of The Next America, only about 19 percent of millennials think most people can be trusted.

Why is that? He goes on to explain: "Millennials came of age in the '90s and aughts, an era of global terrorism, of domestic school shootings, Columbine, 9 11, a lot of pretty horrible things that are particularly disturbing to parents. The worry about strangers online, online predators, and all the rest."

Pair that with the increasing ability to live your entire life online, and our generation is practically doomed to be isolationist. This is perhaps the most dangerous trait that Trump shares with millennials. The same global dangers that have instilled wariness in millennials have formed the basis for Trump's fearmongering rhetoric and exclusionary policy, which treats immigrants, refugees, and other minority groups with loathsome distrust. With his "America first" policies, Trump is effectively distancing America as an isolationist country, which could prove detrimental to us both politically and economically.

Millennials Have the Power to Fight Back

Fortunately, all these negative traits only paint a partial picture of millennials. On the other end of the character spectrum, we are known to be environmentally conscious, socially progressive, and welcoming of diversity. In an op-ed for the Las Vegas Sun, Taylor, the vice president of the Pew Research Center, wrote: "To millennials , pluralism isn't a challenge to be managed; it's an ideal to be celebrated, and the wind at America's back."

Propelled by this "wind" and by the fact that a large percentage are themselves ethnically, sexually, and religiously diverse, Taylor calls millennials the "transitional generation to America's majority non-white future." What's more, millennials are fiercely civic-minded. A USA Today report states that "people born between 1982 and 2000 are the most civic-minded since the generation of the 1930s and 1940s."

Not coincidentally, these are all qualities that President Obama encouraged in young Americans. We watched Obama lead by example of what an environmentally, socially, and civically conscious citizen looks like, many of us during our most formative years, and we are better people for it. But now, we have a septuagenarian behaving like the very worst version of our generation, and he's swiftly dismantling our nation as we know it.

What Exactly Can We Do?

Trump's presidency is historically significant, but what we choose to do in response will be far more important.

So where does that leave us? Let me return to my opening statement: Donald Trump is the most important president we millennials will ever have. We have never, in our lifetimes, seen a leader so blatantly attempt to become an autocrat and who is so categorically antithetical to America's core values. The situation itself is historically significant, but what we choose to do in response will be far more important. This is where we must rely on our millennial strengths; we must use our desire for progress to galvanize and prove that we are in fact the civic-minded citizens that we are known to be.

We should use peaceful protest like that of the historic Women's March and it should never cease and never wane so long as Trump is in office. We can also channel our passions and energy through organizations like the ACLU, Planned Parenthood, The Trevor Project, the Anti-Defamation League, environmental groups, and other social progress groups by volunteering or donating.

Call your local legislators, representatives, senator, governor, and mayor to urge them to help protect the issues you care about. Here's how you can locate their digits. Filmmaker Michael Moore even goes so far as to recommend showing up at their office and asking for a few minutes of their time. Last but certainly not least, you can run for office yourself.

Years from now, as the next generation starts making a difference in society, let's make sure we've set the right example for compassion, resistance, and tireless devotion to progress. Let's make sure that to them, characteristics like entitlement, narcissism, and distrust will be associated with just one person: Donald Trump. Let's shatter any and all similarities our generation might share with this man. Let's show him what it means to be a millennial in the best sense of the word.