As a Reminder, Here's Everyone Nominated For a Grammy This Year 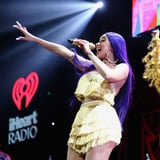 Get the Full StoryGet pumped, because the 2019 Grammy Awards are coming up! After last year's big wins for Bruno Mars and Kendrick Lamar as well as a posthumous win for Carrie Fisher , this year's batch of hopefuls is sure to make for an amazing show. And since the number of nominees in the popular categories has been increased from five to eight, there are even more nominees to root for than usual! Get excited - the Grammys will air on Feb. 10.

ALBUM OF THE YEAR

By the Way, I Forgive You by Brandi Carlile

RECORD OF THE YEAR

"I Like It" by Cardi B feat. Bad Bunny and J. Balvin

"All the Stars" by Kendrick Lamar and SZA

"The Middle" by ZEDD, Maren Morris, and GREY

SONG OF THE YEAR

"All the Stars" by Kendrick Lamar and SZA

"In My Blood" by Shawn Mendes

"The Middle" by ZEDD, Maren Morris, and GREY

"God Is a Woman" by Ariana Grande

"Joanne Where Do You Think You're Goin'? " by Lady Gaga

Love is Here to Stay by Tony Bennett & Diana Krall

My Way by Willie Nelson

Meaning of Life by Kelly Clarkson

"Northern Soul" by Above & Beyond feat. Richard Bedford

"Losing It" by Fisher

"Ghost Voices" by Virtual Self

Oil Of Every Pearl's Un-Insides by Sophie

Rainier Fog by Alice In Chains

Mania by Fall Out Boy

From the Fires by Greta Van Fleet

"Four Out of Five" by Arctic Monkeys

"When Bad Does Good" by Chris Cornell

Everything Is Love by The Carters

The Kids Are Alright by Chloe x Halle

From A Room: Volume 2 by Chris Stapleton

My Mood Is You by Freddy Cole

The Questions by Kurt Elling

The Window by Cecile McLorin Salvant

One Nation Under God by Jekalyn Carr

The Other Side by The Walls Group

You Say by Lauren Daigle

Joy. by For King & Country

Grace Got You by MercyMe feat. John Reuben

By The Way, I Forgive You by Brandi Carlile

Things Have Changed by Bettye LaVette

The Tree of Forgiveness by John Prine

The Lonely, The Lonesome & The Gone by Lee Ann Womack

One Drop of Truth by The Wood Brothers

PRODUCER OF THE YEAR, NONCLASSICAL

"All the Stars," Black Panther

"Mystery of Love," Call Me By Your Name

"Shallow," A Star Is Born

"This Is Me," The Greatest Showman

"Condemned to the Gallows" by Between the Buried and Me

"Electric Messiah" by High On Fire

"On My Teeth" by Underoath

"Jumpsuit" by Twenty One Pilots

"Mantra" by Bring Me the Horizon

"Long as I Live" by Toni Braxton

"Summer" by The Carters

"Y O U" by Lalah Hathaway

"Bet Ain't Worth the Hand" by Leon Bridges

"Don'T Fall Apart on Me Tonight" by Bettye LaVette

"How Deep Is Your Love" by PJ Morton feat. Yebba

"Made For Love" by Charlie Wilson feat. Lalah Hathaway

"Come Through and Chill" by Miguel feat. J. Cole and Salaam Remi

"Long As I Live" by Toni Braxton

"Be Careful" by Cardi B

"Nice For What" by Drake

"All the Stars" by Kendrick Lamar & SZA

"Wouldn't It Be Great?" by Loretta Lynn

"Shoot Me Straight" by Brothers Osborne

"When Someone Stops Loving You" by Little Big Town

"Meant to Be" by Bebe Rexha and Florida Georgia Line

"Break Up in the End" by Cole Swindell

"I Lived It" by Blake Shelton

"When Someone Stops Loving You" by Little Big Town

Molecules of Motion by Steve Roach

"Some of That Sunshine" by Regina Carter

"Don't Fence Me In" by John Daversa

"We See" by Fred Hersch

Presence by Orrin Evans and the Captain Black Big Band

All Can Work by John Hollenbeck Large Ensemble

Heart of Brazil by Eddie Daniels

Back to the Sunset by Dafnis Prieto Big Band

"You Will Win" by Jekalyn Carr

"Won't He Do It" by Koryn Hawthorne

"Look Up Child" by Lauren Daigle

"Hallelujah Here Below" by Elevation Worship

"Living With a Fire" by Jesus Culture

Favorites: Revisited by Request by The Isaacs

Still Standing by The Martins

"All on My Mind" by Anderson East

"All the Trouble" by Lee Ann Womack

"Build a Bridge" by Mavis Staples

"Knockin' on Your Screen Door" by John Prine

Portraits in Fiddles by Mike Barnett

Rivers and Roads by Special Consensus

North of Despair by Wood & Wire

The Blues Is Alive and Well by Buddy Guy

No Mercy in This Land by Ben Harper and Charlie Musselwhite

Here in Babylon by Teresa James And The Rhythm Tramps

Cry No More by Danielle Nicole

Out of the Blues by Boz Scaggs

Whistle Down the Wind by Joan Baez

All Ashore by Punch Brothers

As the World Turns by Uhuru

A Matter of Time by Protoje

The Lost Songs of World War II by Yiddish Glory

All the Sounds by Lucy Kalantari and the Jazz Cats

Giants of Science by The Pop Ups

The Nation of Imagine by Frank and Deane

Faith - A Journey For All by Jimmy Carter

Standup For Drummers by Fred Armisen

Once on This Island, New Broadway Cast

Call Me by Your Name

The Shape of Water

"The Shape of Water" by Alexandre Desplat

BEST ARRANGEMENT, INSTRUMENTAL OR A CAPELLA

"Change the World" by Take 6

"The Shape of Water" by Alexandre Desplat

"It Was a Very Good Year" by Willie Nelson

"Apes " by The Carters

"I'm Not Racist" by Joyner Lucas

Life In 12 Bars by Eric Clapton

The King by Elvis Presley