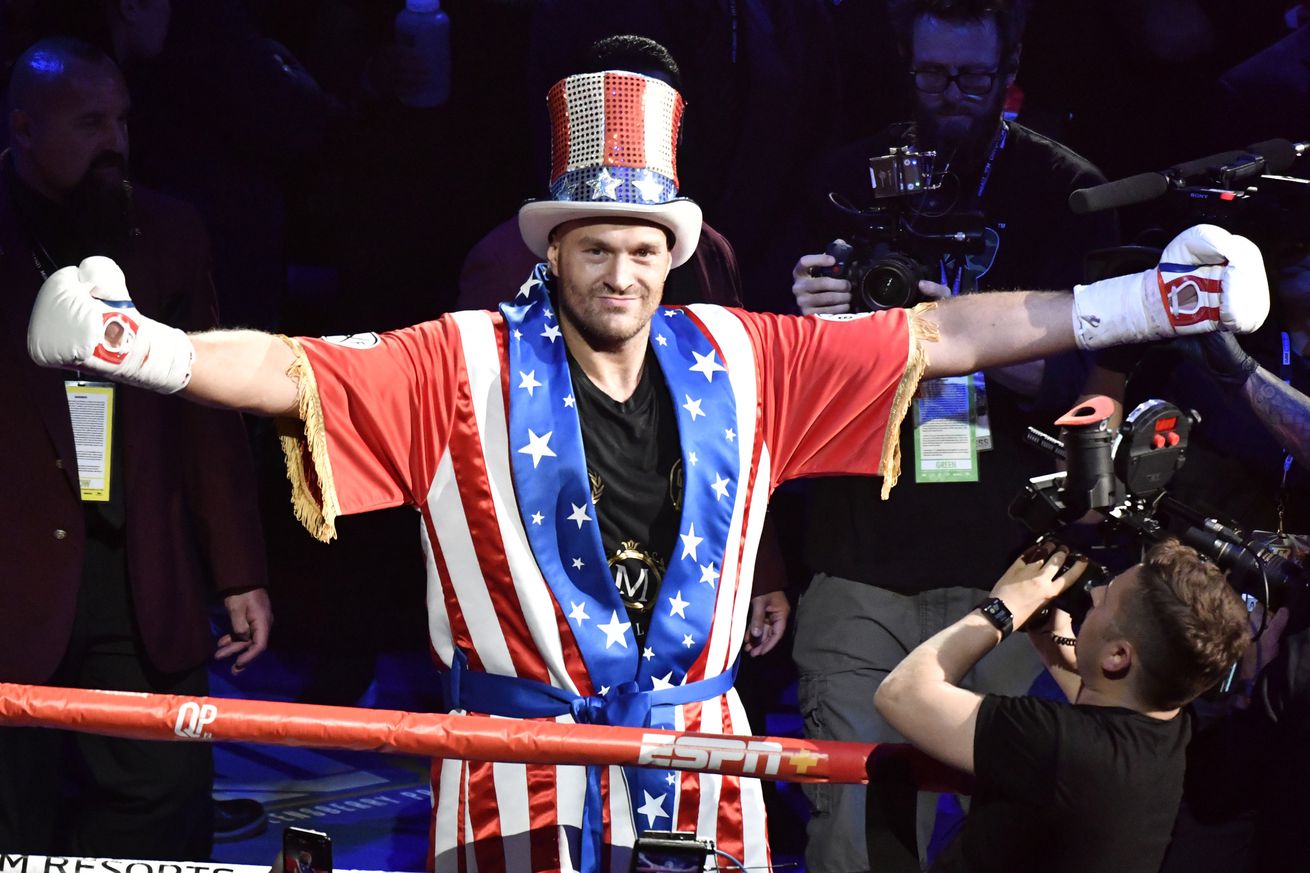 Get the Full StoryPhoto by MB Media Getty Images

Heavyweight king Tyson Fury is back this weekend, taking on Otto Wallin live on ESPN . Saturday night, boxing s Heavyweight kingpin is back in action as Tyson Fury 28-0-1; 20 KO faces Otto Wallin 20-0 1 ; 13 KO . On the line is, somewhat shockingly, no major world title. Wild. Fury vs. Wallin is presented by Top Rank live from Las Vegas and takes place this Saturday, September 14, airing live on ESPN with a fight time of 11:00 p.m. ET.

The champ is here - No alphabet title is on the line, but who needs them anyway? For my money, Tyson Fury remains the true champ of the division. He s the man who beat Wladimir Klitschko, he s undefeated at 3-0-1 since, he s the lineal champ, and #1 on Ring Magazine s Heavyweight list despite his lack of a proper belt... in short, he s the man.

Living in America - This is fight #3 in a row for Fury in the US, and he s seen his star rise considerably through this run. His PPV fight with Deontay Wilder drew a significantly wider audience than anticipated, and then last time out, he really embraced his showman side for a Rocky IV inspired showing against Tom Schwarz. He s well on the road to being a big star in the US.

Style - Fury s style is so unique, with tricky movements befuddling opponents. No one has been able to crack it yet. The closest was Deontay Wilder, who pretty much murdered Fury in the 12th round, only to see him rise from the dead. But that round aside, trying to catch and truly hurt Fury has proved nearly impossible for everyone he s faced as of late.

Where are the opponents? - There are basically three names and three names only we want to see in there opposite Fury at this point. Deontay Wilder. Anthony Joshua. Andy Ruiz. There are a few others you could probably get away with, like Dillian Whyte and Luis Ortiz, but Wallin? He doesn t cut it. At all. According to Bob Arum that will change in February when we get Wilder vs. Fury II - I ll leave it to you to decide whether or not to believe that for now.

Motivated by tragedy - In May, Wallin unexpectedly lost his father to a heart attack. It was his father who brought him into boxing, and Wallin has talked openly about this loss and how it has fueled him for this fight. He s doing it for his Dad, and that can provide some big pressure, but some big drive too.

Needs the win - It s been 17 months since Wallin last had his hand raised. In that time, he s seen his US debut stopped short by a clash of heads No Contest, and had a fight against BJ Flores fall apart at the very last second. Again, he s very driven for success here as a result.

Southpaw - Fury doesn t have a tremendous amount of experience against southpaw fighters; in recent fights, Francesco Pianeta is the only one. Of course, Fury dominated him, but from a technical standpoint, you take what you can get if you re in the Wallin camp.

What else is on the card?

Emanuel Navarrete 28-1; 24 KO vs. Juan Miguel Elorde 28-1; 15 KO - Navarette is the WBO champ at 122 pounds who made a name for himself in December when he upset Isaac Dogboe. He s been charging up the rankings, and just fought and won a month ago. Elorde has fought almost exclusively in the Philippines until now, and is taking quite a step here.

Jose Pedraza 26-2; 13 KO vs. Jose Zepeda 30-2 2 ; 25 KO - Probably the most competitive fight on the card here. Pedraza has been on the losing end of two notable fights recently - first to Gervonta Davis, then to Lomachenko, though he remains the 3rd best in the division according to Ring Magazine. Zepeda has defeated a lot of fighters in Mexico, while falling when stepping up for world title fights. He s a solid challenge for Pedraza.

Final VerdictThis is mainly a showcase card, but the last time Fury fought a showcase fight, it was a massive and massively entertaining spectacle. I have no reason to believe this goes any other way.Prediction: Tyson Fury, KO R4