UFC 248 Moves to Remember: Zhang vs. Joanna, Adesanya vs. Romero 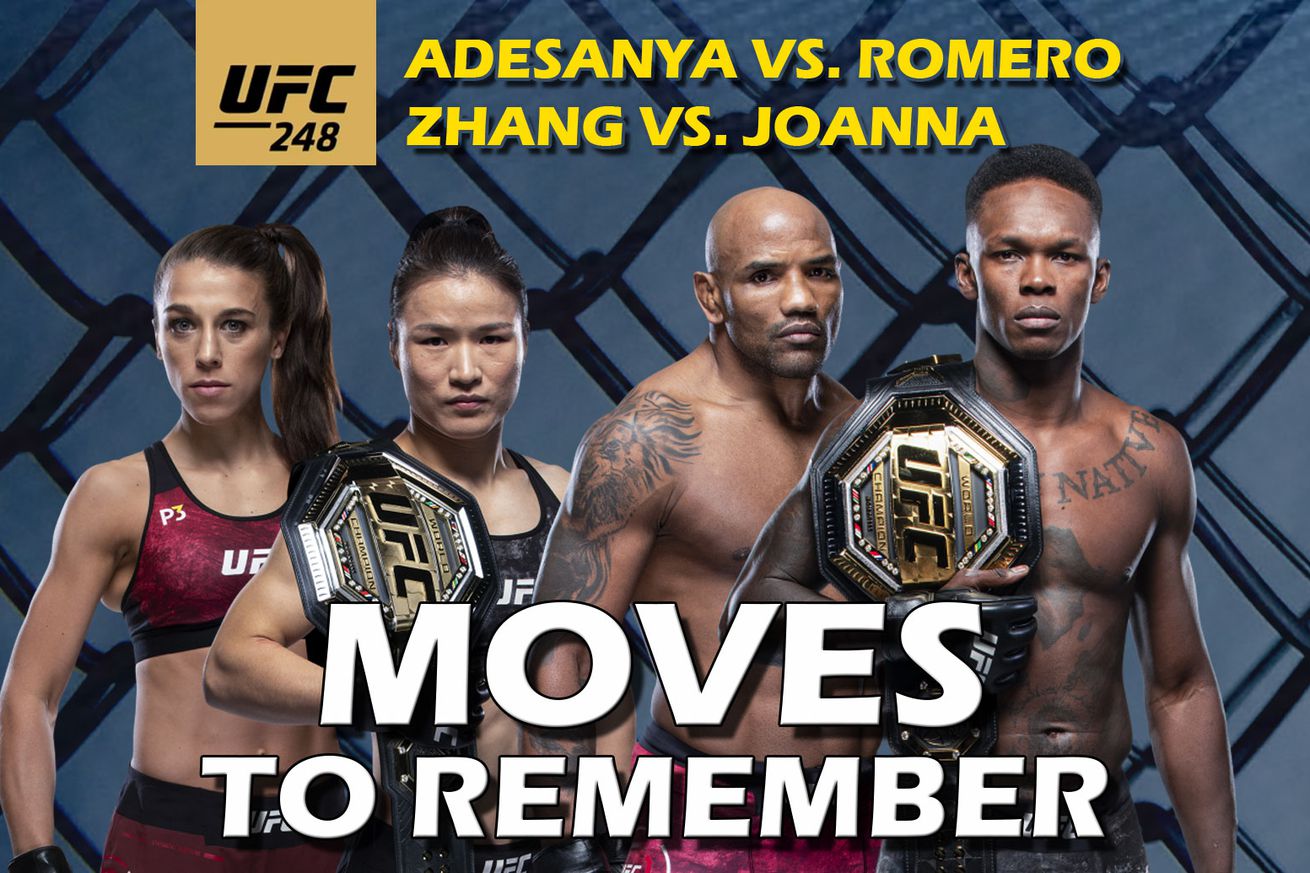 Get the Full StoryA breakdown of the best moves used in these two title fights. UFC 248: Adesanya vs. Romero took place this past weekend on March 7, 2020 at T-Mobile Arena in Paradise, Nevada featuring two highly anticipated title fights.

Both title-holders were able to leave Las Vegas with their belts but both fights ended in somewhat controversial results for different reasons.

Zhang Weili was on the receiving end of a brutal split-decision win against Joanna Jedrzedczyk as the two strawweights engaged in one of the most exciting title fights in recent mixed martial arts history.

There was some controversy surrounding this fight as some felt that Joanna did enough to out-point Zhang. I personally scored the fight for Jedrzedczyk, who landed 186 of 360 significant strikes attempts whereas Zhang landed 165 of 408. I understand, however, that the optics of the massive hematoma on Joanna s forehead didn t play well for her in a fight that was extremely close.

Israel Adesanya then defended his middleweight title in a boring unanimous decision win against Yoel Romero. The bout had fans booing throughout the fight as their encounter was one of the most anti-climactic fights in UFC history.

It is important here for me to give you my take on why this fight unfolded in this particular manner.

In the clip below, prior to the fight, Yoel Romero said the following in an interview for ESPN MMA:

Only YoelRomeroMMA could be this terrifying and inspirational at the same time #UFC248 via Phil_Sports pic.twitter.com 6E0SRIEscD ESPN MMA espnmma March 6, 2020

Romero was obviously referring to Smokin Joe Frazier beating Muhammad Ali using his unique crouching style of boxing in their classic 15-round battle. My guess is that Romero tried to imitate Frazier s style against the taller Adesanya. What he got wrong though is that Frazier was a pressure fighter who would fight moving forward for 15 rounds. Frazier didn t just stay in the middle of the ring. On the other hand Romero did just that waiting for Israel to come forward. Yoel s plan was to catch him with a left hand.

Adesanya tried to engage Romero and almost got clipped a couple of times. Eventually he changed his stance to southpaw and out-pointed Romero using left low kicks that left Yoel s thigh battered and bruised.

Many wonder why the usually exciting Israel Adesanya decided to fight this way. In my opinion he just did what he had to do. This is because Yoel Romero:

a Has a great chin

b Has power & speed

c Is a wrestler

d Has a reach disadvantage

e Does not have the belt.

Why would Izzy risk fighting in the pocket and getting taken down or rocked? He is the champ. He did the right thing and used his reach advantage.

Then again if you are in Romero s corner why don t you let him know that he is probably behind on points and advise him to go after the champ? This doesn t make sense.

This was an unfortunate strategy for Romero who will probably never become the champion. This is not due to lack of talent or lack of opportunities provided by the UFC. Let this be a lesson for all talented individuals out there: Talent is not enough. To quote Floyd Mayweather Jr, champions and winners make adjustments . Romero did not make adjustments and Izzy did. It is as simple as that.

Now that I shared some thoughts about the drama surrounding these two fights, it s time to step back and examine some significant techniques that were used by these world-class fighters. This will enable us to understand the science behind the outcomes and how simple details can make a difference in our beautiful sport.

For all thumb-nailed examples below, round and time marks are provided in order to help you locate the clips on UFC Fight Pass. Let s start analyzing.

Technique #1: The wrong way to get close to a southpaw

Description: I am a fan of Adesanya s technical abilities but this was a rookie move against Romero who is always dangerous and can cover a lot of distance despite his reach and height disadvantage.

When fighting an opponent in a southpaw stance, orthodox fighters should never land their foot on the inside of their opponent s right foot. This leaves them open to the left hand. In this instance Izzy lands his foot on the inside and goes for a left hook. Romero ducks under and almost clips him with an overhand left.

Description: Adesanya is in a southpaw stance and lands with an inside low kick. Izzy then follows up with a question-mark high kick with the same leg. Although he fails to connect with the high kick this is still a great move.

When opponents get hit with low kicks they tend to drop their hands when a second kick with the same foot is launched. If this second kick lands to the unprotected head, this often causes a knockout. Left high kicks are very effective in these sequences.

In my opinion, it is safer to go for this combo when both opponents are in the same stance. Launching inside low kicks against a fighter in an opposite stance can be dangerous, as Anderson Silva found out against Chris Weidman:

Description: This is a beautiful counter against an oblique kick by Romero. Adesanya is in an orthodox stance and launches a right oblique kick against his southpaw opponent. Romero almost clips him by connecting with a left overhand. Romero s left hand is very dangerous and this is why Izzy eventually chose to fight with low kicks from a distance.

Description: In this example, Romero shows how dangerous he is with his double left hand attacks. He is almost able to land on Izzy with a high overhand left from southpaw followed by a lower overhand left as he temporary steps in to an orthodox stance. This enables him to cover more distance and confuse opponents.

Here is a similar example:

Description: This time Romero goes low with the left hand in order to close the distance then steps in to an orthodox stance and goes higher with a left overhand.

Fans accused Izzy of running, however there is no other way to avoid these left hands, especially against a wrestler like Yoel. In a boxing match fighters can roll-under the punch or just go for the clinch. In MMA this could enable a wrestler to get a hold of them. A wide slip to the right combined with footwork is the best way to go.

Description: In this first example Joanna launches a Thai-style push kick to her opponent s chest and Zhang grabs the foot and lands a right hand to Joanna s forehead. This is why I do not like fighters using the push kick in MMA. Wrestlers can grab the leg and go for the takedown and a punching counter is always there. On the other hand I like Conor McGregor s snap-kick version of the straight kick with the back foot.

Below is a similar example where Zhang is able to land the punch that probably caused the hematoma. She is able to keep control of Joanna s leg, push and take her down.

Description: This is a very high level move by Joanna. She has her right foot in front waiting for an incoming low kick. As Zhang launches the right low kick, Joanna pulls her foot back using a switch and jumps to a left high kick that seems to rock Zhang.

As you can see below in one of my old tweets, Joanna has used this attack in the past:

Description: This is a beautiful sequence illustrating how Joanna thrives during chaotic exchanges. Both fighters launch right kicks at the same time but before Joanna s foot touches the ground, she launches a right hand, slips a right hand, follows with a left inside low kick and escapes from a second right hand. Beautiful sequence.

Description: Joanna goes for a jab and Zhang cross-traps the hand with her right palm, pushes it down and misses with a right hand. J drzejczyk has her head down and launches a right hand. Zhang counters over the top and connects with a left hook.

It is important to note here that both fighters do not use head movement when they throw punches. This is not their fault. This is the problem with both Thai-style and Dutch-style kickboxing. The coaches of these styles do not like head movement because they believe that this leaves the head exposed to kicks. In MMA however a boxing approach works better. In boxing, the head has to move with all punches.

This is what caused the hematoma in Joanna s forehead. She defends punches by crouching and extending her Thai-style guard. This results in her absorbing all punches with the forehead. And yes it is preferable to catch punches on the forehead instead of the chin. But it is way better for the head to not be there when a punch is launched. As Valentina Shevchenko noted in an interview for ESPN this fight was actually a competition of who had a stronger head. That being said, was it exciting? Yes. On the other hand, is getting punched like this good for a fighter s career? No.

On a final note, although I was disappointed by the main event, the co-main event was a very entertaining fight. This was a very technical fight worth of repeated viewings and both fighters exhibited great sportsmanship.

This will be all for now. Please give me your take in the comments section below. I read all comments and often reply to educated questions.

For a list of the author s previous technique breakdowns on Bloody Elbow, check out this link.

About the Author: Kostas Fantaousakis is a researcher of fighting concepts, tactics, and techniques, and a state-certified MMA, grappling, and wrestling coach in Greece. He teaches his unique Speedforce MMA mittwork system which combines strikes, takedowns, knees, and elbows applied in the Continuous Feedback mittwork system of the Mayweather family. Kostas is a black belt in BJJ under MMA veteran and BJJ world champion Wander Braga the teacher of Gabriel Napao Gonzaga .