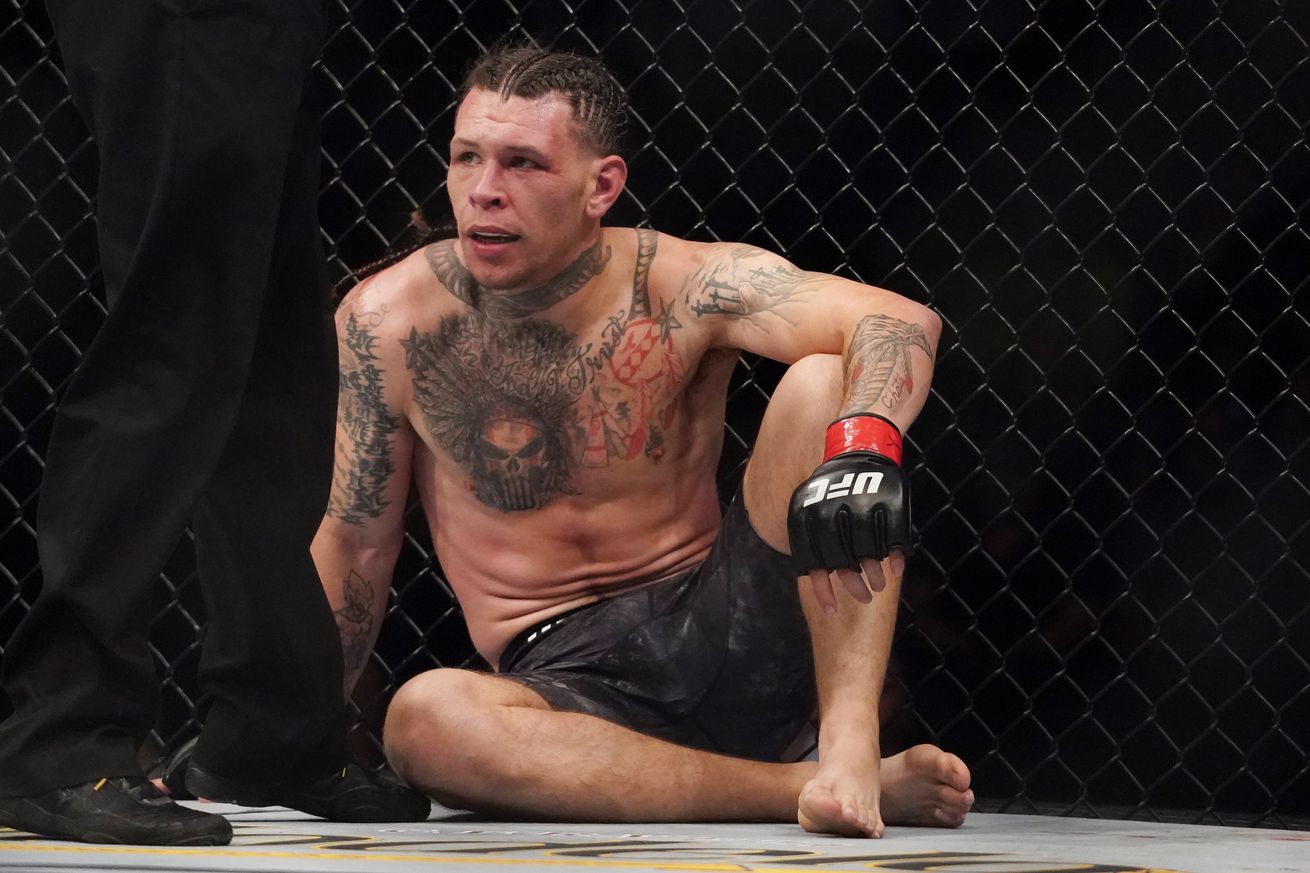 Brok Weaver denies taking part in an orchestrated dog fight that left his pet with a partially missing ear. Disclaimer: Video content may be disturbing for some viewers.

Weaver 15-4 posted a video to his Instagram Story approximately four months ago. In the video, Weaver s dog has patches of blood along the right side of its face and on top of its head. The dog had a piece of its ear damaged during the alleged dog fight. An Instagram user asked Weaver about the incident that preceded the video. The screenshot shows Weaver admitting to orchestrating a scrap between his dog and a friend s.

One of my homies thought his dog could take mine, so we put them to the test, Weaver replied. Lol, mine won but lost a lil bit of his ear.

Weaver spoke exclusively with Bloody Elbow to share his side of the story. He insisted there was no orchestrated dog fight. Instead, it was a play session that got too aggressive. Weaver attributed his dog fighting comments to adrenaline and took responsibility for underestimating the weight of his words.

The fighter said it started about six months before the video in question. Weaver s cousin had a very sickly Pit bull. Weaver who owns 12 dogs on a small farm took in his cousin s dog for a week. Weaver and his wife keep their dogs, which includes bulldog brothers Moses and Samson, unleashed.

He s always been real dominant over food and stuff, Weaver said of Moses. Him and his brother grew up together. Me and my wife keep them loose in the back. They always tell you, Don t keep bulldogs with each other loose, not keeping an eye on them, because they ll kill each other. They don t care if they re mother-and-daughter, father-and-son, brothers, they don t care. They got something in them. When they get at it, they get at it and they can t stop themselves until it s too late. I just can t believe it. It was hard for me to function that.

Weaver allowed his cousin s dog to live with Moses and Samson in a fenced-off area for the week. His cousin s dog was frail and submissive to Moses. Six months later, Weaver s cousin and his dog now much healthier came to visit the farm.

My dog wanted to play. Moses is like this. When he sees another dog come up in the yard, if it s a male dog, he really wants to go, I guess you d say, check him. He would come up and try to play with the male dog real rough. He s trying to play but he s not trying to attack it. There is a difference.

They lived together in my yard for a week and never fought. His dog was pretty much scared of my dog. Once a dog gets a dominance over another dog, they don t really want to fight ever. They become friends. But my dog also hasn t seen this dog in six months and now he s healthy. I don t know what he s been doing with his dog, Weaver said. When my dog went up and tried to play with his dog, his dog got aggressive and growled and snapped my dog s ear off. He took a little piece of my dog s ear, so now my dog fought him. My dog won. I went over and broke it up. I kicked them and broke them up, but every time I kicked them off they would run up under my legs and fight two or three more times.

Weaver ultimately managed to separate the warring canines. Weaver uploaded the footage of his seemingly happy dog splattered with blood.

I saw that my dog was bleeding, well, my boy was like, bro, my dog stood up that time, I told ya. Out of an idiotic thing, I only had 10,000 followers at the time, my adrenaline was pumping and I said some dumb stuff, he explained. I was just being like, alright, my dog fought your dog, your dog fought back, but my dog still won, bro.

An acquaintance from Miami reached out to Weaver and asked about the fight. Weaver told the Instagram user that he and his friend had matched their dogs up. Approximately six hours later, he offered a seemingly unprompted clarification, insisting he was literally joking.

I was really not thinking no harm was done because I know dog-fighting is illegal. A sanctioned dog fight. Where we brought them to each other and made them fight and betted sic money. That s animal cruelty. I sent my dog to play with your dog because they lived together for a week, Weaver told Bloody Elbow. It bled a lot but it was just a little clip. A little clip on his ear. He didn t even care about it. He didn t even feel it.

It was a simple mistake. I bragged about it, he added. I really didn t think he would expose me on Reddit like that. It was a snivy sic move. The guy knows me, he knows I m not that kind of person.

I take full responsibility for what happened. I know now that I can t just post anything because the world isn t going to take it as just anything, Weaver asserted. It was dumb for me to even reply back to that dude with what I said, but you live and you learn.

The society I was born in, I was raised around this area in the woods. Dog fighting was a thing at one time. I grew up very scared of dogs. I feel like I ve beaten my fear by owning dogs, the UFC fighter said. It s a different breed when you have a dog whose daddy was a fighter versus a dog whose daddy wasn t a fighter. When that dog s dad is a fighter, it s bred in him. They ll want to fight any dog when they get to a certain age. My dog is not that dog. He just wants to come up and play... When that dog wants to be aggressive back, then my dog will fight.

I don t agree with anything Michael Vick did. I could not take my dog, Moses, to a dog fight and risk my dog being killed. It would kill me. I wouldn t be able to live without Moses. He s like my son, he assured. No way I could take him to a dog fight. Even if I had full belief in him, I could not chance that my dog could be killed. I grew up around dog fighting owners. These people are still to this day not good men. They live around me. There is just something evil about them. That s not me. I don t have that kind of heart. I can t just raise a dog and love it and risk its life.

Weaver now keeps his dogs on a chain when he and his wife are not present.

Weaver is scheduled to fight Roosevelt Roberts at UFC Fight Night on May 30. The card is headlined by Tyron Woodley vs. Gilbert Burns and is expected to take place at the UFC APEX in Las Vegas, Nevada.

Bloody Elbow has reached out to UFC multiple times for comment.