Janay Rice Opens Up to Matt Lauer About the Elevator Incident 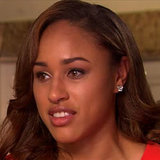 Get the Full StoryRay Rice's wife, Janay Rice, sat down with Today's Matt Lauer to break her silence on the violent elevator incident, the public aftermath, and what she's learned from the experience. Back in February, Ray Rice was arrested for hitting her at a casino in Atlantic City, NJ, and at the time, he pleaded not guilty. In Monday's interview, she talked about the challenge of remaining quiet over the past several months, saying, "It's a natural thing for a human to want to come out and say, 'No, no. That's not me,' or, 'No, that's not true.' But it's like a battle that we just can't win."

Sitting beside her mother, Candy Palmer, Rice got emotional as she opened up about seeing the first tape, and why she won't watch the second. She also talked about having to tell their daughter about it someday, saying, "I don't think I'll ever be prepared until that moment. But we're gonna be honest with her . . . Let her know things like this are not OK. It's not something that she should tolerate. You know, let her know that people make mistakes and it's how you learn from them."