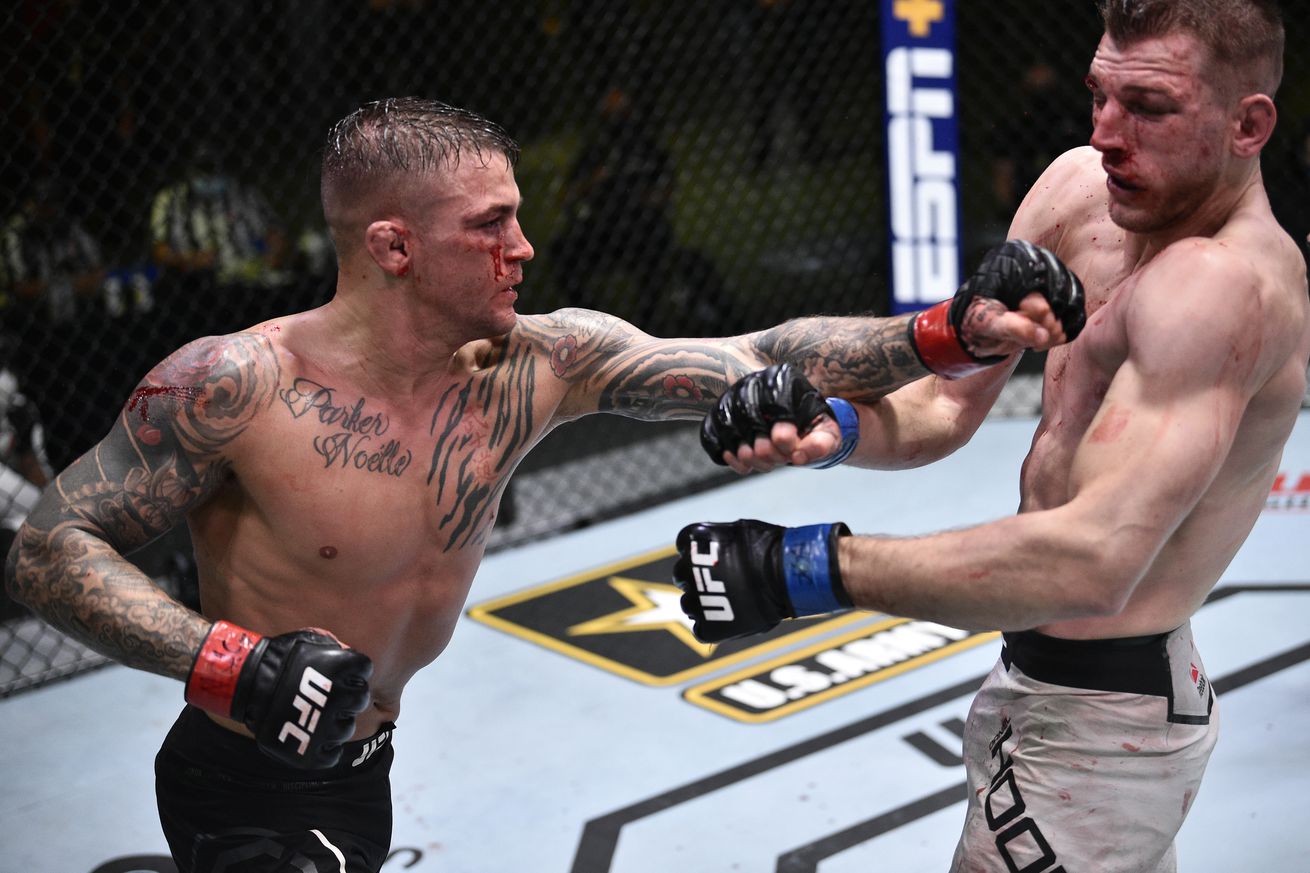 It was even better.

The UFC on ESPN 12 main event between the former interim lightweight champion and the rising contender from New Zealand was absolutely bonkers. How neither man suffered a knockdown with the shots they landed on each other is subject to a scientific study. Hooker started out strongly and seemingly had the upper hand in what was an outrageous slugfest, but Poirier withstood the onslaught and rallied in the latter stages to take a deserved decision at the UFC APEX in Las Vegas.

Not only was this the obvious winner for Fight of the Night, it s going to hold up as a candidate for Fight of the Year when 2020 is over. There was more than just violent striking exchanges; we saw some incredible grappling exchanges on the mat and ultimately that proved huge for Poirier s path to victory.

It s a damn shame there were no fans in the arena to appreciate such a tremendous display of guts, determination, and truly high-level MMA.

Poirier and Hooker traded heavy kicks early. Hooker caught Poirier partially with a left hook upstairs. Dustin was able to connect on a straight left upstairs from his southpaw stance. Hooker was active with his kicks, albeit hitting Poirier s groin cup on a couple of occasions. Poirier grabbed double underhooks midway through the opening frame and drove the New Zealander back towards the fence, but Hooker was able to break free. Poirier tagged Hooker with an excellent body kick and a right hand follow-up that caught Dan s attention. Hooker responded with some quality strikes on the inside to the head and body. The clinchwork was simply magnificent and both men were landing plenty of quality offense one ach other, as expected.

In round two, Poirier blasted Hooker with multiple three-punch combos, only for Hooker to return fire and stop him in his tracks. After a big knee from Hooker, Poirier shot in for a takedown and Hooker stuffed it. It was an all-out war in the pocket and Hooker was getting in some wicked body shots in an otherwise insanely paced fight. Just pure chaos and knockout-worthy blows being thrown and landed, yet neither man suffered a knockdown up to this point. They both were cut along their right eyes. After Dustin cracked Dan with quickfire boxing upstairs, Hooker went on an insane seven-shot demolition that backed Poirier up and badly hurt him. Dan closed the second frame strongly with enormous shots and a knee.

The pace inevitably slowed to start round three, but Poirier was still able to land a couple of jabs. Body kick and hooks and a straight left by Poirier didn t even seem to bother Hooker. Shortly after Hooker lost his mouthpiece and reinserted it, Hooker took Poirier down but right into a guillotine. It looked tight but Hooker s head popped out. Poirier maintained an active guard and eventually wall walked his way to his feet and then lit up Hooker with an assortment of punches that would make mere mortals curl up into fetal position. Dan just ate them like a snack.

In round four, Poirier was more willing to stick to his jab than the taller, longer-armed Hooker. A body kick by Poirier was caught and Hooker took him down, but Poirier bounced back up. Hooker jumped on his back in the ensuing scramble, then Poirier ducked under and got back to his feet. Another guillotine off the takedown by Poirier proved unsuccessful but he stood up again and he got his first completed takedown of the fight. Dustin controlled the hands and took the back, unleashing several head strikes. As Hooker tried to get to his feet, Poirier jumped on his back but was too high. Poirier transitioned to an armbar, then an omoplata, and Hooker denied him the submission. Hooker returned to his feet and hit a double leg, then slammed his way out of another guillotine just before the round ended.

With the two warriors exhausted, it was all up for grabs in the fifth and final round of this incredible contest. The punches were coming slower as expected, but it was Poirier who seemed to have the slight edge. That southpaw jab was finding its target on the bridge of Hooker s nose. They tagged each other with jabs before Poirier thudded home more power shots on Hooker. Dan clinched and tried for a takedown to no avail. Consecutive straight lefts snapped Hooker s head back and he still would not go down. Another takedown for Hooker was completed but this time Poirier abandoned the guillotine and eventually returned to his feet. Hooker s next takedown was countered with a headlock and then he let go. With one minute to go, Poirier was the fresher fighter with the better, more effective offense. Poirier connected on an uppercut, then Hooker answered with a knee. Hooker got clobbered with a straight left as he dove for a takedown and Poirier scrambled and spent the remainder of this incredible, thrilling, outrageous fight on top.

This was Poirier s first fight since losing to current champion Khabib Nurmagomedov and keeps him very much in the hunt for another title shot. As for Hooker, it s just his second loss since moving up to the UFC lightweight division, and when coupled with his thrilling win over Paul Felder in February, he has two Fight of the Year contenders on his docket.