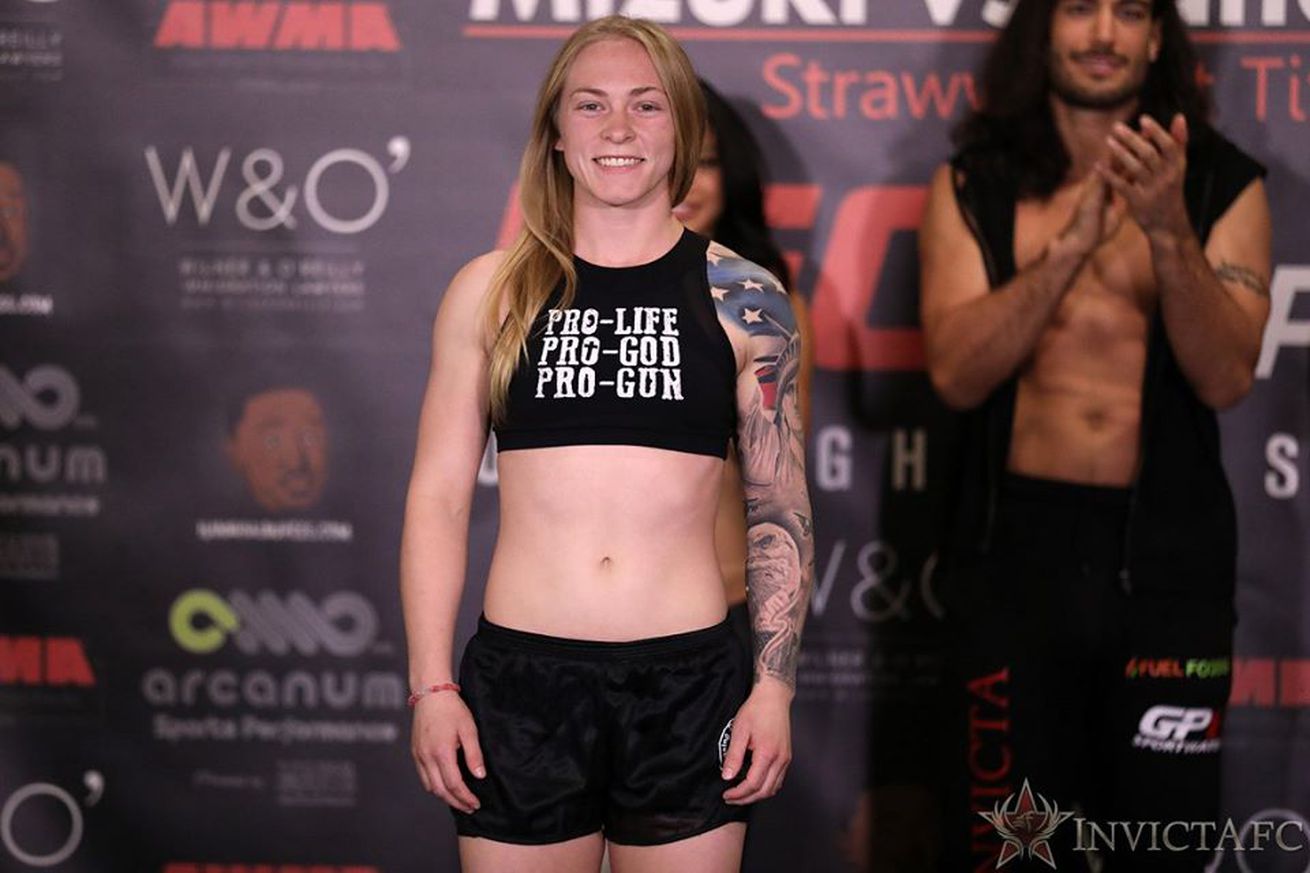 Get the Full StoryInvicta FC

The UFC newcomer has been dealing with some backlash due to weigh in photos from her early Invicta fights, most notably a weigh-in outfit reading I love the way Candace Owens thinks. Considering the short notice nature of her UFC debut, Kay Hansen made a strong first impression as a fighter to watch in the women s flyweight division. The 20-year-old former Invicta FC talent took on recent Invicta & Rizin title contender Jinh Yu Frey on just a few days notice at UFC on ESPN 12: Poirier vs. Hooker last Saturday, at the Apex facility in Las Vegas, NV. After a back and forth first two rounds, Hansen hit a flying armbar, and finished off Frey with the submission in the ensuing scramble.

And while the victory may have been a sweet one, it also appears to have brought with it a new level of scrutiny that Hansen s time fighting in Kansas City did not. Namely photos from her early career Invicta weigh-ins surfaced where Hansen was sporting a series of strong religious and political messages. Things like Pro-Life, Pro-God, Pro-Gun, 2 Corinthians 6:2 generally read as a warning to non-believers to turn to Christ , and most notably a sports bra reading I like how Candace Owens thinks.

Hansen quickly took to social media to explain those statements, calling them the product of a manipulating and toxic environment.

I was very young and in a manipulating and toxic environment during that time in my life. I was also very young. Views and opinions evolve as well. Take all of this in to account before you jump on a hate train Kay Hansen KayHansenMMA June 30, 2020

In a recent interview with MMA Fighting, Hansen expanded on her response. And while she didn t give any details as to exactly what that environment was beyond calling it an at home situation or where her current beliefs lie, she did make it clear that even at the time those were statements that she wasn t comfortable with.

It s crazy because all those pictures and stuff are from when I was 18, Hansen said. I m not ready to share my story, per se, but in the short sense, like I said, I wasn t in an environment where I was able to think for myself. I was manipulated and kind of heavily influenced into portraying myself in a certain way. Whether it was for marketing purposes or whatever, I was kind of in an environment and I didn t know how to get out.

And I was 18, so I was easily persuaded. It s just dumb because I m getting a lot of heat for things that I didn t even want to do myself at the time. I was literally 18. That s the hardest part I think about making my debut so young on such a big stage with Invicta. Everyone messes up when they re 18, but no one sees it. No one gets scrutinized for it because no one knows about your mess-ups when you re 18, but me it s like everything is on social media. People are so quick to think they know me and think they know what I believe in and what my views are. Man, I was 18. I m 20 now. For a little over a year now, I ve been out of that environment I was referring to. I ve been able to be my own person and have my own views. I m not even the same person that I was in those pictures.

To back up Hansen s statements, the 10th Planet Fullerton athlete fought for Invicta three more times between 2019 2020, and in each of those bouts the political and religious messaging that marked her early career was notably missing.

With what seems likely to be a long and hopefully fruitful MMA career still in front of her, she should have plenty of opportunities going forward to show fans exactly what kind of person she is both in and out of the cage. And, if she truly doesn t want to be tied to the messaging of her past, to put it all far behind her. For her part, Hansen told MMA Fighting that she feels that there s too many people trying to put on a fake persona, and I did it too when I was 18. But I learned from it.