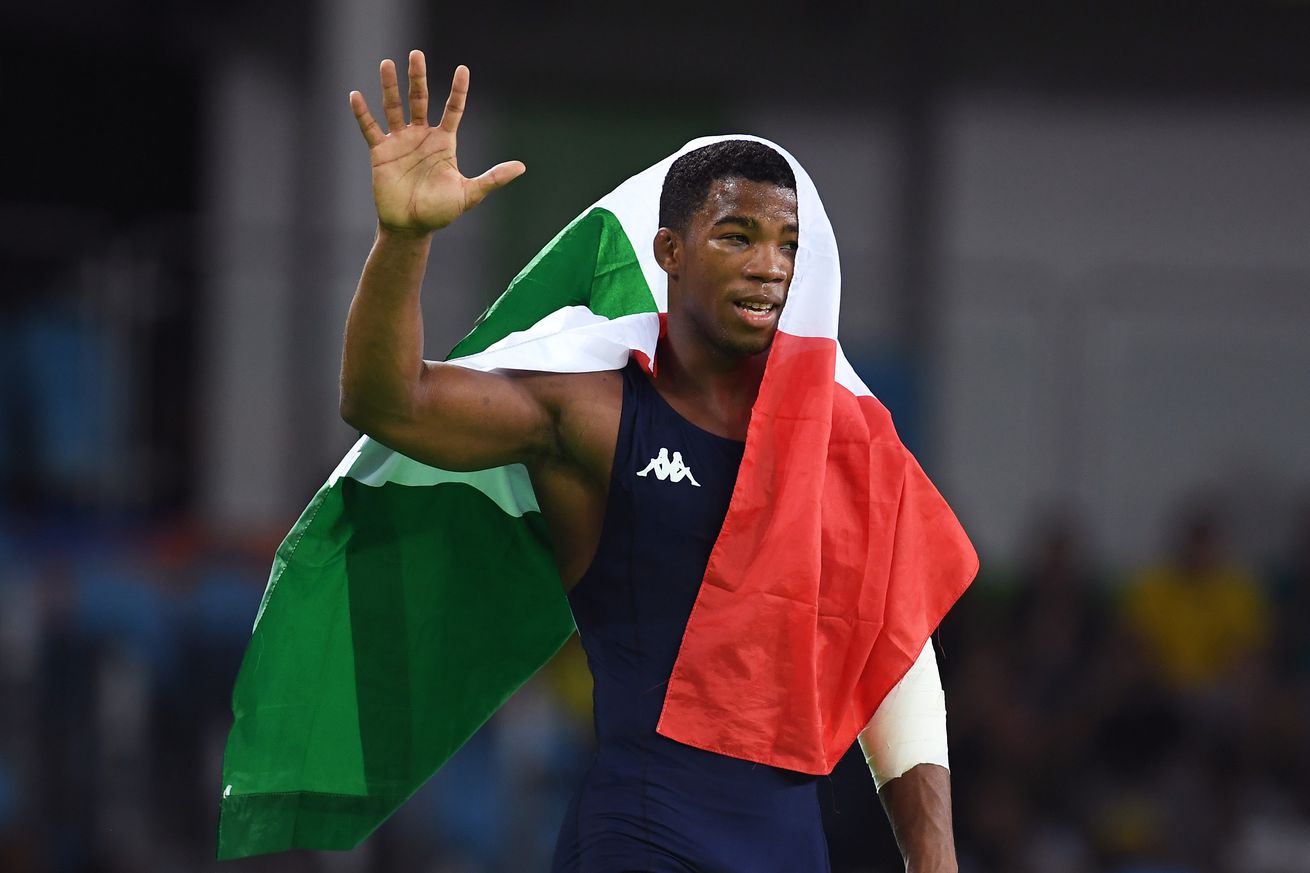 Get the Full StoryPhoto by Laurence Griffiths Getty Images

Highlighting the superhuman timing and positioning of the two-time World champion. Throughout the last decade, Frank Chamizo Marquez went from a solid, but unknown World medalist to one of the most popular athletes in the sport of wrestling.

At 55 kg, Chamizo earned World bronze for Cuba. Chamizo s physical growth, along with the rise of perennial contenders Yowlys Bonne Rodriguez and Alejandro Valdes Tobier, essentially bumped him out of World team contention for Cuba.

Chamizo used his family ties to Italy to secure a transfer. Often, wealthy nations without high-profile athletes of their own will facilitate those transfers and sponsor foreign competitors, although the physical location usually doesn t actually change. Cuba is the rare exception, Chamizo became a bit of a nomad post-transfer. He s trained all over the world, with extended stays in Dagestan and now New York City.

Up at 65 kg, Chamizo turned heads with an active start for Italy, winning medals at 10 out of 13 competitions on his way to his first World Championships since transferring. The 2015 World Championships in Las Vegas were truly his coming out party - Chamizo won gold, outplacing future 2016 Olympic champion Soslan Ramonov and pinning the powerful veteran Mohammadi of Iran.

Chamizo showed out again in Rio, losing only to 2012 Olympic champion Toghrul Asgarov and defeating NCAA champion Frank Molinaro in the bronze medal match. He rebounded with his second World title in 2017, defeating two-time World medalist James Green in the finals up at 70 kg.

2018 marked a move to 74 kg for Chamizo, along with the arrival of Zaurbek Sidakov. The current pound-for-pound #2 wrestler in the world upset both Chamizo and Jordan Burroughs on his way to his first World title, forcing Chamizo and Burroughs to battle for bronze. Burroughs prevailed, sending Chamizo home without a medal.

In 2019, the only real change was the structure of their brackets. Chamizo made it to the finals, his stiffest test being Dagestan to France transfer Zelimkhan Khadjiev. Sidakov took out Burroughs on his side, before ending Chamizo s run at silver.

That dynamic has held solid. Early on in their rivalry, Chamizo was able to push and even defeat Jordan Burroughs, but the gap has been increasing for the American. Sidakov has gone to the wire with Burroughs twice now, but prevailed each time. For most the pecking order seems to be: Sidakov beats Burroughs and Chamizo, Burroughs beats Chamizo.

A new athlete has entered the conversation.

Four-time NCAA champion and now two-time World champion Kyle Dake is dropping back down to 74 kg in preparation for the Olympic Games. He has been unable to win a series vs. Jordan Burroughs, their last meeting taking place in 2017, but Dake is undeniably now at the peak of his career. Conversely, Burroughs may be losing a step. Though he won the series in 2019, Burroughs dropping a match to Isaiah Martinez wasn t a great sign for his form moving forward. Martinez is an incredible wrestler, but he has not proven himself to be on the level of the pound-for-pound greats that Burroughs must face to medal.

Based on this trajectory alone, many are wondering if the Kyle Dake era is about to begin for the US at 74 kg. If so, can he challenge Sidakov, and where does he stand vs. Frank Chamizo? These fresh matchups are certainly exciting, but they were purely hypothetical, until now.

On Flowrestling s freestyle pro event on Saturday, July 25th, Kyle Dake and Frank Chamizo will wrestle. Taking the bout at 79 kg, Chamizo will likely be giving up some size to the reigning World champion, but it s our first chance to see how Dake stacks up with the established guard at 74 kg.

For a more in-depth breakdown of that match, and the other bouts on the card, check out my podcast.

Today I ll be showcasing the talent of Frank Chamizo by taking a look at some of his most dangerous and tricky offense from tie-ups.

Deadly efficiency from the two-on-one

Frank Chamizo owes much of his success to smooth transitions and his ability to immediately pull the trigger when he creates an opening. His highlight reel is largely incredible defensive feats, which demonstrates similar qualities, but the details are a bit more subtle with his offense.

Take a look at this footsweep against Seung-chul Lee at the 2019 World Championships in Kazakhstan.

Chamizo begins in collar and wrist control, the wrestlers are matched up in what you might call open stance , from a striking perspective. When wrestlers lead with opposite legs, it creates a lane for attacks on the lead leg, but makes it more difficult to penetrate straight-on. Outside step shots become more common, double legs less so.

For an athlete who likes to manipulate levels and create misdirection for explosive attacks, it isn t the best position. There is one clear target. However, it allowed Chamizo an opportunity to show off his refined offense from tie-ups.

In one smooth motion, Chamizo transferred control to the two-on-one. He slipped off the collar tie and locked onto the tricep, while simultaneously releasing Lee s left wrist in favor of his right.

Feeling Chamizo adjust his grips, Lee looked to pull back and posted on Chamizo s head with his free arm to create separation.

However, Chamizo was able to use his newly acquired two-on-one to pull Lee s arm across his body, bringing up his trail leg to square his stance and anchor himself.

The two-on-one some call it a Russian tie is an amazing position for control, it allows the offensive wrestler to take an outside angle and manipulate posture and positioning. Attacks from the two-on-one are a little more nuanced than most, and it doesn t help that the defensive wrestler is typically just looking to separate and wait out the position.

But Frank Chamizo made his move immediately.

Climbing his lead hand further up the arm, Chamizo pulled from the armpit and brought the arm in high against him. Pulling the arm further across his body, Chamizo pivoted on his far leg. As a result of this repositioning, Lee had no choice but to take a step forward to maintain balance.

Notice that Chamizo is not stepping his far leg further away to pull Lee forward, he s C-stepping backward. Not only does this bump Lee out of position, it creates imbalance. Lee is remain squared up with Chamizo, while being pulled to his left as Chamizo pivots toward his right.

This is why Lee s foot is pointed out toward his right, he was preparing to turn in while posting on the head.

Lee s weight was loaded on that right foot, so Chamizo took it away.

Chamizo gave the arm one last pull to the left, then used a slight hop step to bring up his lead leg for the sweep. Kicking at the ankle, Chamizo completely debased Lee, allowing him to release the tricep grip and slide around for a go-behind.

It doesn t look like much, but with full context you can see how many steps went into that setup. Because of his sneaky footwork and slick, procedural grip-fighting, that small sweep was all he needed to capitalize on Lee shaky positioning.

Against a fellow defensive wizard in Kyle Dake, Chamizo will need all the offensive savvy in his arsenal. You can watch the match on FloWrestling on Saturday, July 25th.

There has been some controversy about the lack of Greco-Roman and women s freestyle coverage by FloWrestling, the card is exclusively men s freestyle bouts. For quality Greco coverage, check out 5 Point Move, and for insight into the struggles of female wrestlers, learn more through this article and the hashtag #HowSheWrestles.