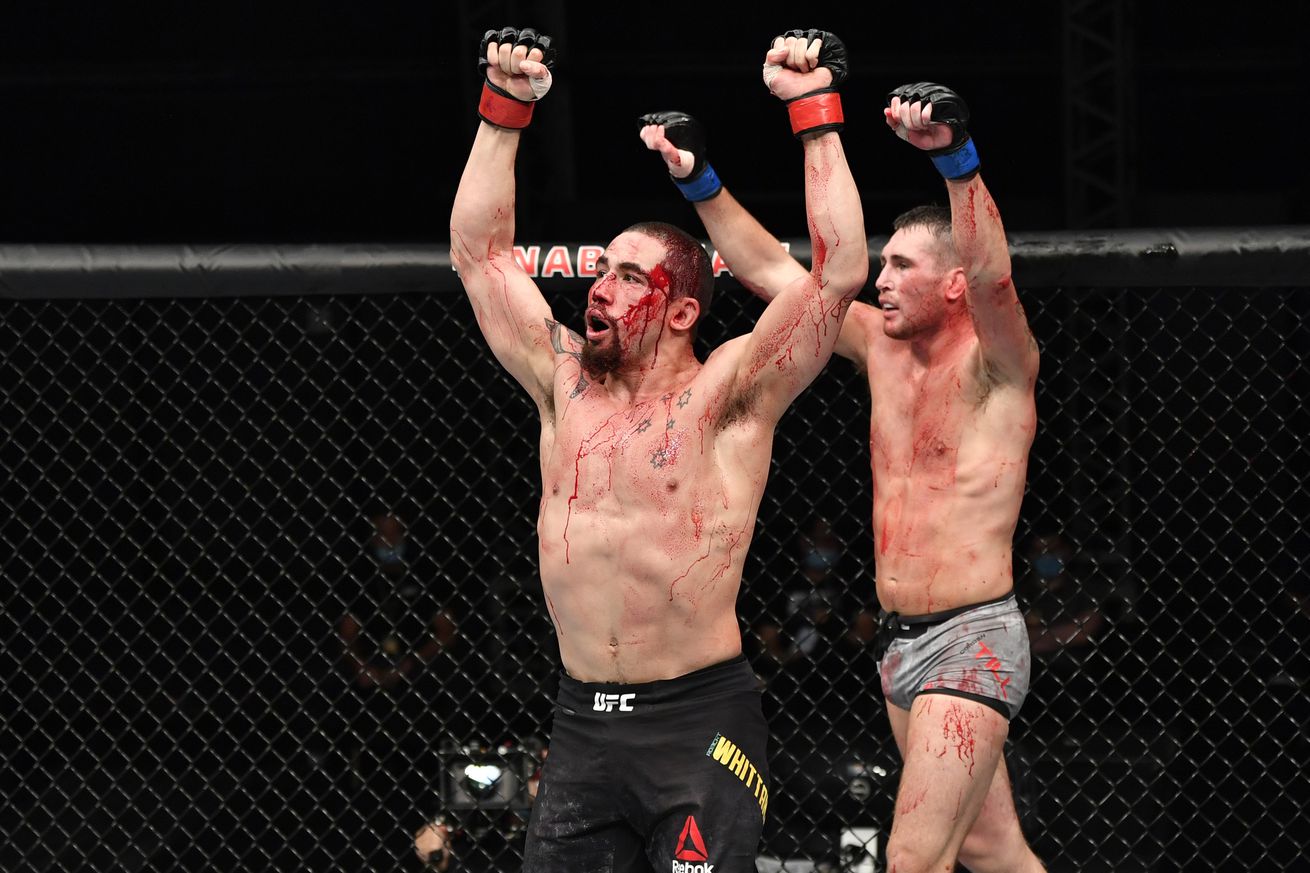 Jordan Breen takes a look at middleweight s strange history. Last Saturday night, the Ultimate Fighting Championship bid farewell to Fight Island in Abu Dhabi, hoping to make its own UFC Apex back in Las Vegas its home for the foreseeable future during the COVID-19 pandemic. More importantly, the UFC said adios in style, with a largely entertaining albeit 15-fight card, topped by a fantastic middleweight clash between former divisional champion Robert Whittaker and Darren Till. This weekend, when the UFC heads back to Sin City, it will again feature 185-pounders in the main event, as 11-0 Edmen Shahbazyan looks to leap into another tier of the division when he meets sturdy veteran Derek Brunson.

At this point, you d be forgiven if you thought this was going to be a column all about the middleweight division s ascent to prominence. That s just half of it.

How s that, you ask? It s not difficult for me to talk about the 185-pound weight class per se, yet when I look at yet another sensational middleweight main event like Whittaker-Till, immediately followed by another headliner in the same weight class seven days later, my instinct and pressing thoughts aren t necessarily about how improved the middleweight division has become over the last decade. Instead, I consider the current strength of the division in comparison to the comparatively languid light heavyweight class, which has long been the star-laden, money-making division.

Call it a mental block, call it fogeyism, but as 185 pounds has become one of the sport s best, most calculably entertaining divisions in recent years even though I comprehend and appreciate the fighters and events that have led to this I can never help but see middleweight as MMA s original bastard division. After the adoption of the Unified Rules 20 years ago instituted a new weight class structure prior to, middleweight was the 200-pound division the division struggled to find its footing and was both maligned and seemingly cursed.

Years of middleweight ennui actually started outside the UFC. In July 2001, Zuffa staff went to International Fighting Championship: Warriors Challenge 14 in Friant, California, ready to position the winner of the main event between Pancrase ace Nathan Marquardt and Gil Castillo against Dave Menne to crown their first 185-pound champion later that year. The UFC brass were all in on Marquardt, who looked great for 10 minutes before sustaining a back injury, allowing Castillo to breeze through the final three rounds and pull off the upset, already screwing up the UFC s plans.

Menne-Castillo took place at the historically disastrous UFC 33 card just two months later, with Menne winning in a forgettable fight. Not long after, Menne was soundly destroyed by Murilo Bustamante, who quickly affirmed himself as the best middleweight in the world. After Bustamante dummied Matt Lindland twice in one night to defend his title, the UFC responded by refusing to meet his contract demands, letting him sign with Pride, a company that wouldn t have a middleweight division for another four years. The title would remain vacant for over two years, until underdog Evan Tanner won a four-man tournament to win the title. Of course, this tournament was set up to crown Robbie Lawler, who the promotion was still driven to turn into one of its stars, at least until Tanner easily triangled him in the semifinals.

This is a time at which there was so little relevant middleweight competition, most MMA sites and magazines of the time ranked Paulo Filho as the top fighter in the division, despite the Brazilian actively competing at 205 pounds and random catchweights in Pride. Meanwhile, at this point in the light heavyweight division, the UFC has Randy Couture, Chuck Liddell, Tito Ortiz and Vitor Belfort. Pride s 205-pound division boasts Wanderlei Silva, Quinton Rampage Jackson, Kazushi Sakuraba, Dan Henderson, Antonio Rogerio Nogueira, Ricardo Arona, Hidehiko Yoshida, and young iterations of Alistair Overeem and Murilo Ninja Rua. There was really no question which division was the most magnetic and magnificent division in MMA, even at the height of Pride s heavyweight Big Three of Fedor Emelianenko, Antonio Rodrigo Nogueira and Mirko Cro Cop Filipovic.

Then, while it was a slow, arduous process, the fortunes of each division began to change. The UFC s plan to make Rich Franklin into its 185-pound superstar didn t quite work, as the foil they signed to legitimize him, Anderson Silva, turned his nose upside down and began an unprecedent, nearly seven-year reign of dominance that would cement him as one of the best fighters in MMA history. Pride opened up its own 183-pound division. Meanwhile, some of the sports biggest stars, like Couture, Liddell, Ortiz, Sakuraba and Silva were becoming older and more shopworn; while the 205-pound class still had plenty of starpower, middleweight was creeping on a come up.

What I find so truly compelling at the comparison of these two divisions is that the drastic shift in excitement and relevance between the pair has been both gradual and sudden, somehow. For middleweight, it took almost five years to gain any footing, yet between the legendary reign of Silva and the best kind of parity who ever thought Michael Bisping would become champion, and Georges St. Pierre would come out of retirement to thwart him? the division always seems like something titillating is on tap.

Last Saturday s Whittaker-Till fight was emblematic of this, as while I m always hesitant to say that in a fight, everyone can be a winner, since it s logically not true. Yet, Whittaker was in need of a bounce-back win after his myriad of injuries and being dethroned by Israel Adesanya, and Till showed he s an elite presence at 185 pounds, proving his meddle by fighting through an MCL tear. Whittaker is still just 29 and Till is 27; there s little reason, barring injuries, that both won t be major players in the division for years to come.

As for light heavyweight? Well, for the past few years, it was buoyed by the Jon Jones and Daniel Cormier feud. But, it was three years ago that we were all feverishly anticipating the rematch between the two. While his win taken away due to typical, shambolic Jones foolishness this time a positive test for turinabol when Jonny Bones returned, he was seemingly more focused and certainly more active. In a 13-month span, he took out Alexander Gustafsson for a second time, before ripping off title defenses against Anthony Smith, Thiago Santos and Dominick Reyes. Sounds great, right? Not as great as you might think.

Jones, despite how tight and competitive his defenses against Santos and Reyes were, has effectively cleaned out the 205-pound division for the time being, with all due respect to ardent Jan Blachowicz fans don t worry, I still think the Pole should be in a title bout next time out. Fans and Jones himself are now itching to see what he can do at heavyweight after 12 years of dominating at light heavyweight. Jones himself seems to have retreated into his own boredom, talking about how he wants to retire if he can t secure a major fight at heavyweight. Even if it s obviously pure bluster, it still speaks to how disinterested Jones is at continuing at 205 pounds. Furthermore, it s worth noting that two of Jones last three challengers, Smith and Santos, were both career middleweights until very recently.

This is not to say light heavyweight is devoid of talent. The aforementioned Reyes is just 30 years old and still honing his skills, while Santos has several good years ahead of him. The UFC recently snatched up former Rizin light heavyweight champion Jiri Prochazka, 27, who made a sensational debut last month knocking out former title challenger Volkan Oezdemir, who is only 30 and just entering his prime. Oezdemir s most recent win came over Aleksandar Rakic, 28, who is not just fun to watch because of his dynamic striking, but because he s still generally improving fight to fight. Jim Crute, Magomed Ankalaev, Jamahal Hill, Da Un Jong and Shamil Gamzatov are all intriguing, quality prospects, all still in their 20 s. In fact, I would submit that in terms of pure volume of prospects, light heavyweight has a leg up on middleweight right now.

All that said, Jones has levelled basically every fighter worthy of a title shot sorry again, Blachowicz fans and Daniel Cormier is bound to retire soon as a heavyweight. If Jones does move to heavyweight in the near future and Cormier hangs up the gloves, the division is wide open. Though that sounds attractive and stirring, it introduces two other problems: one, whoever wears the gold next at 205 pound will be considered a paper champion to some extent having never beat Jones and two, none of the aforementioned fighters have the obvious it factor that could lead them become bonafide draws or superstars.

Funnily enough, 205 pounds gave us some legitimate entertainment last Saturday on Yas Island. Think about how it came though: an unnecessary but fun third fight between decrepit forms of Mauricio Shogun Rua and Antonio Rogerio Nogueira 15 years after their first meeting, and Paul Craig hitting another improbable triangle on Gadzhimurad Antigulov. Undeniably entertaining, but when that is what constitutes elite-level 205-pound action especially when held up against a middleweight bout like Whittaker-Till, it only serves to underscore how the stature of both divisions have wildly changed.

Is this some catastrophic issue, poised to bring the UFC crumbling down? Of course not. The promotion still controls the vast majority of the best talent in the sport and for the most part, talent and star power in any division is going to be fairly cyclical. Yet, for UFC and MMA on the whole, this feels like the nadir for the weight class that has been the straw that stirred the drink for over two decades, while its misbegotten little brother, 20 pounds lighter, is as entertaining as its ever been, led by an undefeated champion in Adesanya, who might be the most exciting fighter in the sport.

There s no great scheme the UFC can architect to cure the 205-pound division of its ills, other than trying to coax Jones back into the recent level of activity we ve seen, while aggressively matching its up-and-coming talent in hopes of cultivating some elite, eye-catching challengers. As the 185 lb division s onerous, uphill battle to the forefront shows us, such outcomes often require considerable time and patience. In the meantime, it s middleweight time. I love it, but damn if it still doesn t strike me as strange.