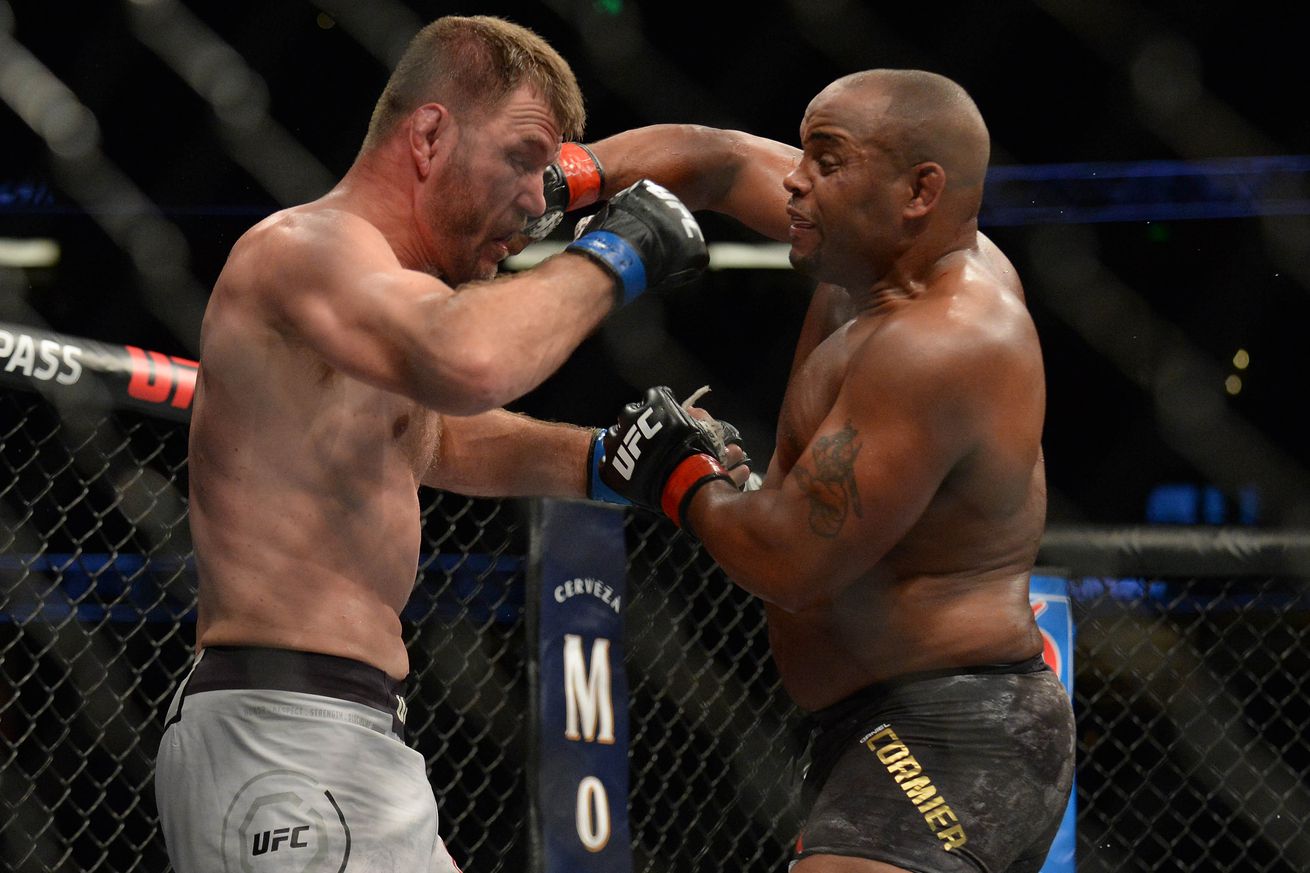 Get the Full StoryGary A. Vasquez-USA TODAY Sports

A detailed breakdown of the position-by-position statistics to watch out for in Saturday s UFC 252 fight card from Las Vegas. The UFC is back in Vegas this week for the second pandemic PPV show to be held at its Apex facility, and boy is its headliner a doozy. Whether or not you believe the winner should be considered the best heavyweight in UFC history, it s one hell of a matchup. The current champ, Stipe Miocic, owner of the longest streak of heavyweight title defenses in UFC history throws down for the third time against the former Strikeforce Heavyweight Grand Prix dominator and former UFC double champ, Daniel Cormier, in a rubber match which could also serve as DC s swan song in the sport.

Pouring through their numbers made me a little nostalgic and sad and excited. I m an emotional mess! But that s why we love this sport.

Fingers crossed all goes well this week, which is the best we can do in the COVID era. Let s jump into the stats.

This piece is a bit different than usual since it tends to focus on stats from their first two matchups. When it talks about alternative stats, remember they re not official UFC statistics. They re generated from official statistics and designed to 1 give more weight to the recent present than the distant past and 2 not let one huge or horrible performance dominate the data. See the notes at the bottom for definitions of certain statistics.

Barring the fight gods toying with our emotions, Saturday will cap off an unusual sequence of events where DC and Miocic will basically have fought each other three times in a row dating back to the summer of 2018 unless you think we got much new information from DC walking through Derrick Lewis .

In my statistical breakdown of their original meeting at UFC 226, I wrote that if the fight played out at distance, the alternative stats scream support for the heavyweight champ Miocic .

Perhaps that support was less of a scream and more like a whisper.

After sharing almost 24 minutes of fight time in the cage, and almost 17 minutes at distance, DC has been the far more effective one at popping jabs to the other guy s head 77 landed to Miocic s 35 , and he s even led the power battle with 79 strikes landed to Miocic s 72.

In the clinch a position they ve shared for almost four minutes with Miocic having control against the cage for 2:40 Miocic has landed 24 power strikes. But even with what s tended to be less advantageous positioning, DC still managed to land 23 of his own including a devastating knockdown to knockout sequence although that came from a free clinch off the cage .

Meanwhile the ground hasn t even been close. To repeat, the ground hasn t even been close. Even though Miocic has technically led the statistical takedown dance with two to DC s one one in each fight for Miocic, and R1 of the second fight for DC , DC s been the one with top control for over 2:45 while Miocic has only had the benefit of top positioning for a measly 12 seconds. It s fitting since DC s been world-class at not letting his back stay on the canvas too long throughout his career.

In 18 documented Zuffa bouts, DC s been controlled on the ground for a grand total of only 1:49, an impressive stat all on its own. Then consider that in that short time on his back, DC has nine standups. NINE! With alternative stats weighting, DC s standup rate is a mind-boggling 21.3 per five minutes in the position P5M . The average heavyweight s rate is 1.9 and Miocic comes in even worse at 1.5.

So basically, what we ve seen so far is a slight statistical advantage for DC at distance, both fighters doing damage in the clinch even though Miocic has tended to have better positioning, and a monster advantage for DC on the ground which he s yet to fully exploit, although it seems he s aware.

This in no way counts Miocic out in the least. He learned something in their most recent round, and he learned it to the tune of 14 power shots to the body to DC s one and an eventual cage-and-pound TKO. We ve yet to see how Miocic will use that information going forward.

If DC is serious about implementing a wrestling-heavy approach in the small UFC cage, his experience on takedown attempts so far against Miocic has been 1-for-3. His two misses rightly came from distance, a position where Miocic has exceptional alternative stats defense with only 3 of attempts completed. DC s lone success was a lower body attempt from the clinch, a glaring area of weakness for Miocic. Against four lifetime lower body attempts, Miocic has successfully defended just one. Meanwhile, DC s volume is solid, attempting 52 more lower body takedowns than average P5M, and he completes an exceptional 66 .

Then add in that Miocic hasn t been the best at getting back to his feet. And then for good measure, add in that DC has been 37 better than average at keeping opponents on the ground.

This chess rubber match should be a fun one. Be good to us, fight gods, be good.