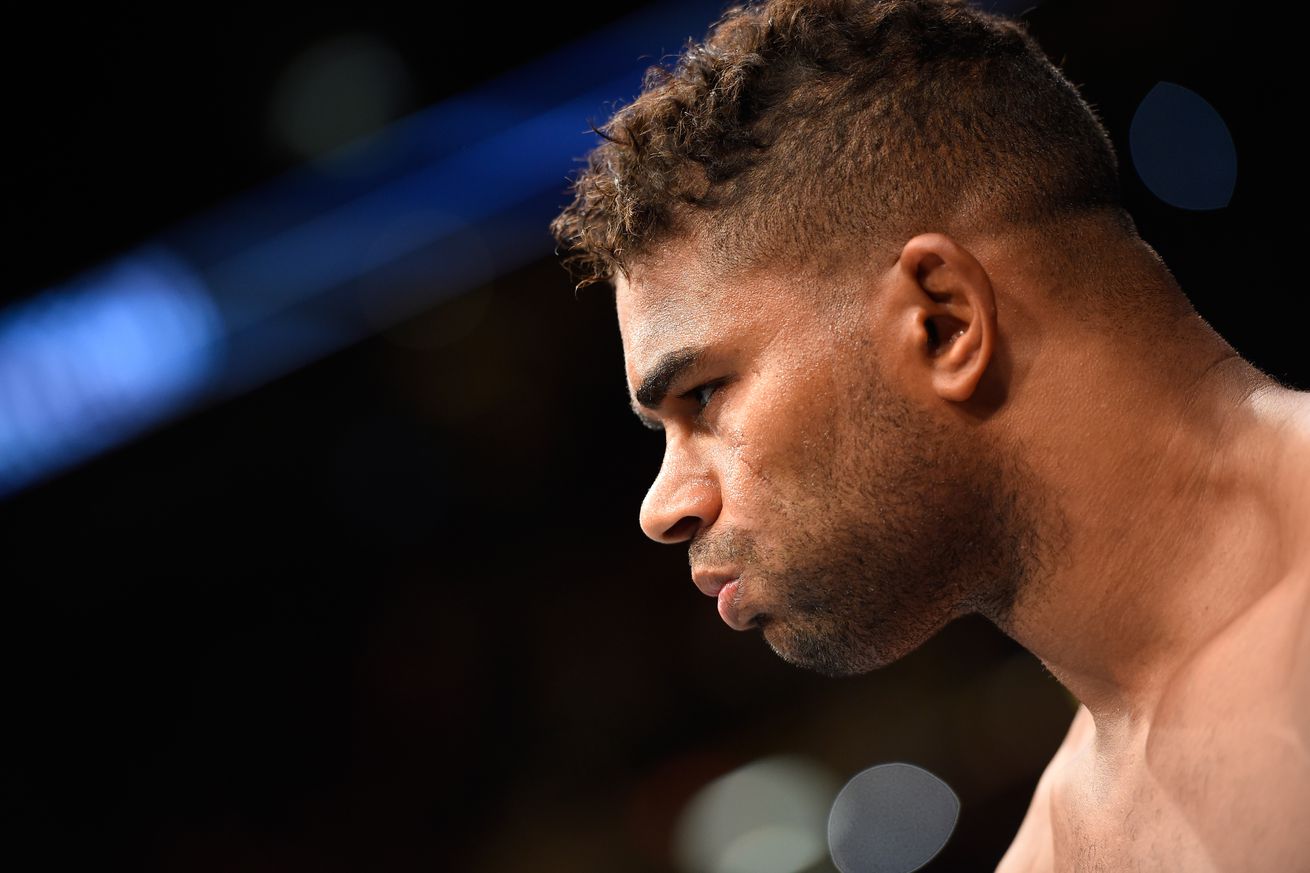 Jordan Breen analyzes the legacy of MMA s Demolition Man . This past Saturday s UFC card in the APEX bubble didn t promise an awful lot on paper and the event was held true to that prediction, capped by a lackluster and limp main event, a prosaic unanimous decision win for Aleksandar Rakic over former light heavyweight title challenger Anthony Smith.

Consequently, most of the post-fight discussion around the event centered on what would come next for a handful of fighters and not just Smith, who is now 1-3 in his last four bouts after his surprising surge to relevance throughout 2017 and 2018. Former welterweight kingpin Robbie Lawler, now 38 years old, suffered his fourth straight loss in a one-sided decision against Neil Magny, causing many a fan to shed a tear for one of the sport s most entertainingly violent fighters ever and contemplating how best to send him off in the sunset, while perennial featherweight contender Ricardo Lamas, despite winning a tidy verdict over Bill Algeo, openly discussed contemplating retirement after his victory.

Given a lack of other notable talking points, it s to be expected that the post-event discourse would strongly center on Well, what happens to Fighter X now? narratives, but it s also a reminder that the UFC product, and MMA on the whole, is in a particular state of flux as a notable crop of the sport s stars and notables over the last decade or so are winding down their careers and or settling into less-than-elite roster roles. This ongoing story got me thinking ahead to this coming weekend s UFC offering and in particular, one of its headliners who has faced the Well, what now? question routinely over his 20-plus year career.

Yes, the other half of Saturday s UFC main event in Las Vegas is Alistair Overeem, competing in his 66th pro MMA bout. The fight is somehow weirdly suitable for Overeem: Sakai, despite a strong 15-1-1 record, seldom thrills or dazzles even in victory, but despite all The Reem s technical and athletic advantages, he is still just a -145 favorite. We all understand this, however, because it s Alistair Overeem. At 40 years old, against a once-beaten fighter with legitimate striking power, nothing is a given, just as it has been throughout the Dutchman s mercurial career.

There s no doubt that Overeem is already casting a glance toward retirement and his life s next chapter. He s openly adopted One last belt, one final run as a personal mantra and has proclaimed that he will remain embedded in the sport long after he s done fighting. However, given the perpetual roller coaster that his fighting career has been, it s hard to fully figure out in what fashion that denouement may take or what sort of timeline we should be considering.

If Sakai was able to surprise Overeem and crack him in his infamous Achilles heel, residing in his chin and not his foot, it doesn t seem likely he d hang his gloves up then and there, especially given how many times he has been able to defy the odds and reinvent himself.

Given his longevity, popularity and omnipresence in the MMA world over the past two decades, it s hard to believe Overeem started his career as the spindly, less-than-impressive baby brother of Valentijn Overeem, who at the time, was a legitimate heavyweight contender via his exploits in Rings, where he was the 2000 King of Kings tournament runner-up to Antonio Rodrigo Nogueira, beating the likes of Renato Babalu Sobral and Randy Couture heinous stoppage notwithstanding along the way.

Meanwhile, Alistair started his career a meager 4-3, suffering close, uninspired decision losses to Russian grappler Iouri Kotchkine, and getting knocked out through his gloves somehow by Bobby Hoffman. He was far, far away from being the good Overeem .

Fast forward two years, he had considerably improved his overall MMA game and landed himself a deal with Pride Fighting Championships. Yet, he was still viewed with a measure of suspicion and in some cases, outright contempt, given his persona which was, and still is, an interesting mixture of taciturn and swaggering. This may seem bizarre, childish or downright stupid to some reading this 15 to 17 years after the fact, but there was a considerable contingent of fans that despised The Demolition Man -era for seemingly no reason other than his sauntering ring entrances to god awful European trance music and his cartoonish hammer prop he carried with him.

Overeem s true breakout didn t happen until Pride s 2005 grand prix, where he upset Vitor Belfort and Igor Vovchanchyn with his vaunted guillotine choke. Prior to that, Overeem s greatest achievement for most MMA onlookers was providing the dubious linchpin in the trite Pride is the best, the UFC sucks arguments of the day because he once scored a flash knockdown on Chuck Liddell in the 205-pound GP two years prior. Then, for the next few years, Overeem reverted back to his bipolar form, punctuated by three straight stoppage losses the only time he has lost more than two consecutive bouts in his career to Antonio Rogerio Nogueira, Ricardo Arona and Mauricio Shogun Rua. At this point, it is not an exaggeration to say that fans regarded him as a talented but highly flawed never-will-be. This was 13 years ago.

Then, Overeem put down the hammer and picked up the horse meat you can make your own jokes here. After departing from the light heavyweight division, Overeem went on a 12-fight unbeaten streak, capturing both the Strikeforce and Dream heavyweight titles. He even managed to make snooty kick-boxing fans cry and wet themselves by running roughshod over the field to win the 2010 K-1 World Grand Prix. Then-UFC big boss Lorenzo Fertitta was so enamored with the new, physically freakish and destructive incarnation of Overeem, that the company offered him a handsome and hefty free agent deal in 2011.

In his Octagon debut, he promptly humiliated former UFC champion Brock Lesnar in less than three minutes, making him break-dance on his face while being pelted and pounded. Given the historically topsy-turvy and barren nature of the heavyweight division, it seemed hard to imagine that Overeem wouldn t wear UFC gold at some point, if even for just a moment.

We re going on nine years. It still hasn t happened.

Even if you re a fairly nascent fan of MMA that has just become hooked in recent years, little of what I ve just written about should surprise you, as Overeem s 18-fight Octagon tenure has been a microcosmic model of his entire career. He s beaten five former UFC heavyweight champions and managed to fight for the title just once. His career, while studded with championships and great wins over noteworthy fighters, is an exercise in taking one step forward, then stumbling a step or two back.

All seven of his losses in his UFC run have come via stoppage, but perhaps none of them are as emblematic of his often frustrating essence than his loss to Jairzinho Rozenstruik last December, a fight he was seconds away from winning via decision before celebrating prematurely, then having his mouth literally ripped in half and being vanquished with four seconds left. It may be MMA s foremost tragicomedy that so often when glory is within sight for Overeem, he finds a way to walk chin-first into an open manhole and crashing into a sewer of disappointment.

This is what makes Overeem s last hurrah intriguing for me. No matter how many times we ve seen Overeem foil himself in lamentable fashion, we still know he s possesses a level of technical and athletic ability that far surpasses the vast majority of heavyweights. More than that, given the advanced age of the average elite heavyweight in conjunction with the typically less-than-consummate skillset, Overeem s age and the fact he s been professionally fighting more than half his life are far less than relevant than the are for, say, Robbie Lawler.

It is overwhelmingly likely the next UFC heavyweight title fight we get is a rematch between Stipe Miocic and Francis Ngannou, and that bout s winner figures to face the victor of November s Curtis Blaydes and Derrick Lewis showdown. Beyond that, the only fighter firmly positioned above Overeem is the aforementioned Rozenstruik, who is still a work in progress and may falter in the near future against more seasoned opposition.

One final run might just seem like a pie in the sky, promotional pump-up for Overeem, yet somehow, it s not that far-fetched. As I said, this is heavyweight MMA.

I m far removed from having confidence in any prognostications involving Alistair Overeem s career; as much as I expect him to piece up Augusto Sakai, another stumble into a pitfall would hardly shock me, or anyone, really. That s the unique poignancy of Overeem: he isn t perfect, he is perfectly flawed. He looks like and at his best fights like an outrageous, fantasy-laden blueprint for the ideal heavyweight, yet more than anything else, his legacy is a testament to the strange, unreliable and unpredictable nature of that division.

Even if he wins his redemptive one last belt , Alistair Overeem s legacy will never be that he was the greatest heavyweight, but it just might be that he is the most heavyweight fighter in MMA history.