What Parents Should Know Before Letting Their Kids Watch Black Panther 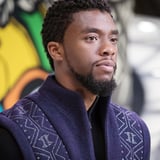 Get the Full StoryBlack Panther isn't only a hit with the critics - Marvel's 2018 superhero film starring the late Chadwick Boseman has become a worldwide phenomenon. Although superhero movies might spark the interest of your kids, you're right to wonder if everything in it will be appropriate for how old they are. Fortunately, we can confirm that Black Panther is a beautiful, diverse, and funny movie that you should definitely watch with your children if you feel they're old enough - it has an official PG-13 rating "for prolonged sequences of action violence and a brief rude gesture."

If you want to know exactly what issues you might run into with a little one, however, keep scrolling for the things that might be a bit too much for kids on the younger side.

Related: A Dad on His 7-Year-Old Son's Tribute to Chadwick Boseman: "He Said He Wanted to Find a Way to Honor Him"

Sequences of Violence and Action. Black Panther isn't a bloodbath, but some fight scenes can get a little dicey if your child isn't ready for that. During two hand-to-hand combat scenes in Wakanda, the film's hero and his opponents slash and stab each other, for instance. The beginning of the film also features a few people getting shot by the villain, there's an intense scene while characters are in a casino, and at one point a man is thrown off a cliff.

Profanity. One character gives another the middle finger in a lighthearted scene.

Movie Length. Black Panther clocks in at two hours and 14 minutes, so if your child isn't a fan of sitting still for that long, you might want to build in a break about halfway through for bathroom visits and snack retrieval.