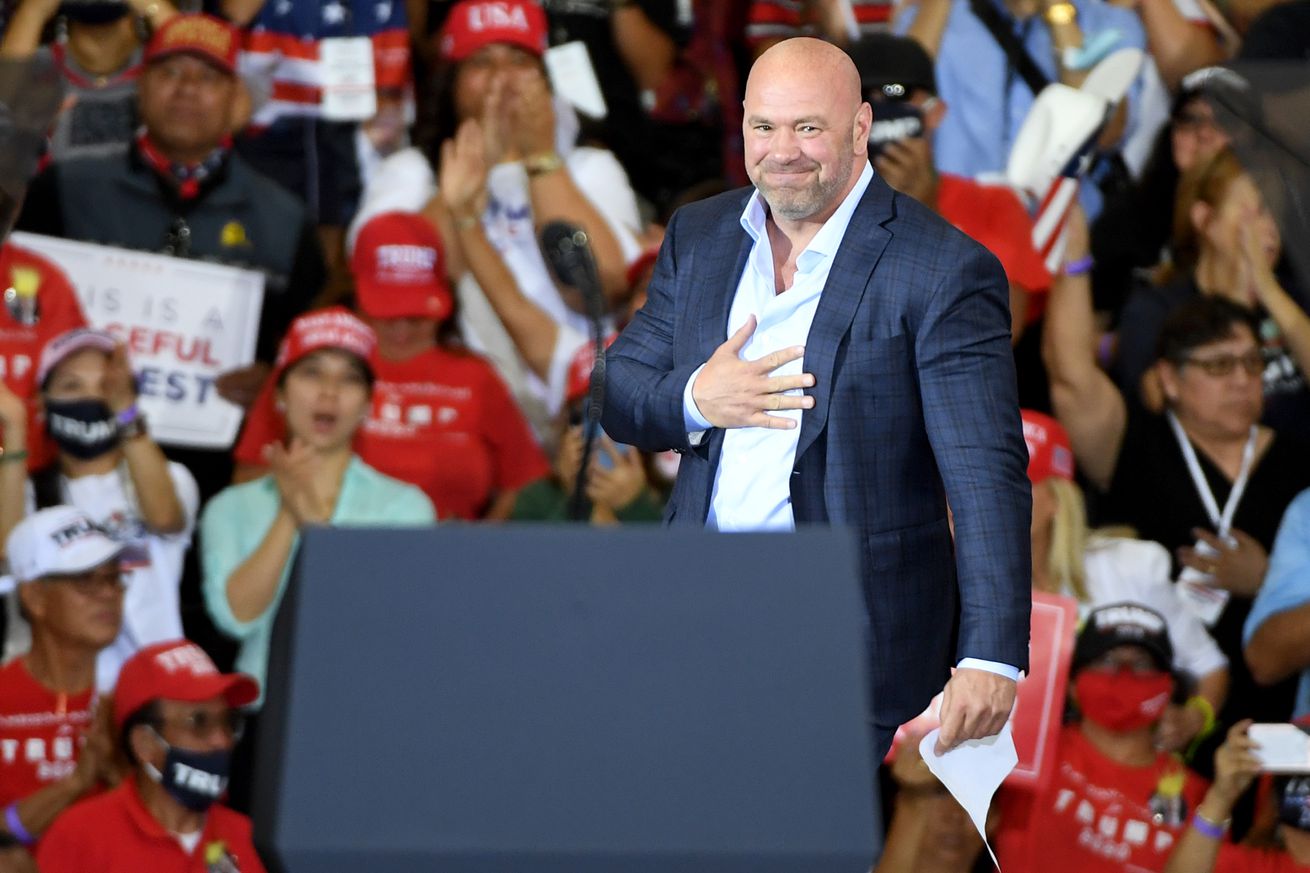 Dana White had a lot to say about Israel Adesanya s flashy entrances. It d be weird for a promoter to have a problem with his fighters helping promote fights, but this is Dana White. If you ve been following Dana White in particular, and the UFC in general, then Dana s recent comments about Israel Adesanya being too flashy are not surprising. In fact, they re thoroughly predictable.

The comments would be innocuous on the surface, but this wouldn t be an opinion piece if I didn t think they spoke to broader themes. For one, Dana himself loves the spotlight. He s always conducted himself as a fighter. Which is understandable; in a narcissistic way. After all, he did help Chuck Liddell train for his 2003 Pride fights. He nearly fought Tito Ortiz. And he was a boxercise instructor in Boston before his casino buddies gave him a Get Out of Whitey Bulger Jail free card. He s white collar employment s version of a Metal Gear Solid boss: suit and tie in the front, mini guns and cool looking nanomachine scars in the back.

Freedom is a funny word. It means everything, and nothing. People have all of it, or have never known it. The word is a linchpin for political movements, even though nobody aspires to it. It s just there in the air, as the clown philosopher once said. To the extent that the word gives us deeper insight into how it affects us, the German psychologist Karl Groos helps us here. In observing infants, he found that children were at their happiest when they discovered that they were the cause of a certain effect. The pleasure at being the cause, he called it.

I m just copy and pasting thoughts from David Graeber s excellent Bullshit Jobs . Not because it s a good book that s been on my mind, but because I sometimes wonder how quickly being a UFC fighter is becoming a bullshit job. Just to clarify, I don t consider prizefighting a bullshit job. On the contrary, I consider prizefighting one of the purest forms of labor: it s storytelling without the pretentious ivy league metaphors.

But let s backtrack. Graeber, being the thoughtfully vulgar anthropologist that he was, has a working, highly functional definition of a bullshit job. A bullshit job is a form of paid employment that is so completely pointless, unnecessary, or pernicious that even the employer cannot justify its existence even though, as part of the conditions of employment, the employee feels obliged to pretend that this is not the case.

It s the pernicious part that gets me. The conditions of prizefighting, and everything that s at stake couldn t be more dramatic. And yet the rewards seem meager by comparison. Why else would fighters leverage the law against the UFC except to restructure the freedoms it actively takes away from its workers? It s not just coming from woke millennials who want their food menus to come with a bibliography. It s people like Joe Rogan, who have openly criticized the UFC pay structure. Hell, it s people like Randy Couture, who probably got his baby milk out of a bowl of biscuits and gravy.

The fighters with less freedom soldier on. And in place of real change, they take the most practical route to criticizing your boss without giving him a reason to fire you: beg for 50 G s on national television or see what social media can bring.

It s old hat, and unfortunately, so are Dana s fans.

This is ultimately Dana s power over his fighters: the constant reminder that the fighters are not as important as they think they are. It s not a coincidence that Dana s biggest feuds are with the UFC s needle movers. At a certain point, Randy Couture didn t need the UFC. He had the power of Hollywood, and Sylvester Stallone s craggly Expendables franchise. At a certain point, GSP didn t need the UFC either. He had his own negotiating power, and the realization that prizefighting is a young man s game. All of a sudden a close fight was all Dana needed to throw GSP under the bus and pretend like UFC 167 was the biggest robbery in history. Anderson Silva, Henry Cejudo, Demetrious Johnson, Tito Ortiz: the list goes on. It s not a coincidence that the list is almost exclusively a list of champions.

You can practically set Dana s next complaint about fighters not wanting to fight to an egg timer. No, really.

But why does any of this matter? Dana has an opinion about Adesanya s entrances. He s free to have it. But you re not convinced, are you? It s just liberal Bloody Elbow writers criticizing Dana White any chance they get because he s friends with Trump! Get over it!

Well I don t think a person s conduct can be separated from their history. Dana s history is riddled with a heightened self-importance that has created both positive and negative effects. People often say things that mean something else. He talks about keeping things as minimal as possible but this is a man whose sports model was fashioned after Vince McMahon. Not Gary Bettman. This is a man who spoke for six minutes at the highest levels of politics, endorsing the flashiest president ever. And in case you can t tell, this man is the same man as Dana White. Why have his principles suddenly changed?

The interesting thing about Groos work with infants is that he was interested in human games. Why do we invent games? Like, sports, for example? Does it serve an evolutionary purpose? Groos figured that like the infant, exercising free will was such an enchanting power in and of itself, that games help serve as a conduit towards understanding our own volition. It s not something we can observe directly, or study implicitly. How else are we gonna understand it, except as a will to power?

In that light, I think Dana s real problem with Adesanya is quite clear. The more successful Adesanya becomes, the more freedom he has. And that means freedom from needing Dana White.