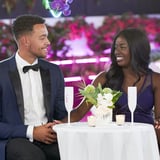 Get the Full StoryWhen Love Island USA's second season began, I was apprehensive about a lot of things, including the future of the sole Black woman of the original cast, Justine Ndiba. Reality TV doesn't have a great history when it comes to the treatment of Black Women in general, but Love Island has an especially grim past when it comes to Black contestants trying to find love. "We didn't find anyone who liked us. It was always someone coming in and saying 'My type is blonde and petite,'" Love Island UK's Yewande Biala told 1Xtra Talks about struggling on the show alongside winner Amber Gill, who is mixed race, and Anna Vakili, who's Iranian. "We'd just look at each other and say 'They're obviously not here for us.'"

So, when I saw Justine enter the Las Vegas villa in all her glory, I was immediately consumed by the worry that the same story would play out again - which it did for the first several episodes. But then, on day five, Caleb Corprew entered the scene, and as the Canadian rapper formerly known as Jimmy Brooks once said, "Nothing was the same." Fast-forward to the season's final episode, and the winners of Love Island's second season are Justine and Caleb, the first Black couple to win in the entire franchise!

"It feels surreal, it's still sinking in," the 27-year-old billing coordinator told POPSUGAR over the phone. "It's definitely amazing but it's such a crazy thing because I had no idea I'd even make it past that first week!"

"It feels like we're in a dream and we haven't quite woken up yet," her 24-year-old beau admitted. "It's been really flattering to see all the support we have behind us."

Support is probably an understatement; the couple has a legion of fans armed with memes, video edits, and nimble voting fingers, who have been rooting for the two since they got together. Their names would regularly trend on Twitter during the show's airing, and their rise to show favorites shot to meteoric heights after the Casa Amor segment solidified their union.

"He called me out saying, 'I want me a confident girl, if you want me, show me.' When we got to the car wash challenge I was like, 'Say less.'"

Although Justine was with Tre, Caleb stirred her interest more than any of the other men in the villa, and Caleb wasn't shy about letting her know that he was also interested. "When he walked in there was definitely an initial attraction. It was his confidence," Justine recalled. "There was a casino night where I had an opportunity to dance on him or something and I didn't. He called me out on it saying, 'I want me a confident girl, if you want me, show me.' When we got to the car wash challenge I was like, 'Say less.'" And thank goodness he did!

"Oh man, I was blushing so much, I probably looked childish because I was looking away and giggling," Caleb said, calling back to the moment Justine made her move literally, since it was a dance challenge during the car wash challenge and chose him to kiss. "I couldn't believe what she was doing in her routine and at one point she looked over at me asking, 'Are you looking,' and all I could say was 'Oh my god!'"

And while he enjoyed the routine and being the object of Justine's attention, Caleb noted that the move showed him more than just her sex appeal, it told him how much she wanted him. "I just saw her really put herself out there, let herself be vulnerable for the first time, and lay it all out on the line," he explained. "I love that and I continue to love that about her. And I'm so happy that she did put herself the way she did."

Why Lauren Speed's Role in Love Is Blind Is So Important

The relationship that blossomed quickly became a fan-favorite, especially among Black viewers. For one of the rare times on reality TV, we were not only seeing a Black couple fall in love but also seeing a dark-skinned Black woman be fiercely sought after and genuinely loved out loud. If there was one thing no one with sense could deny about Caleb in the villa, it was how excited and happy he was to be with Justine. From the way he unabashedly expressed his interest for her, took every opportunity to steal some of her time, excitedly went into every date, and loudly proclaimed her as "My baby," Caleb never hesitated to show how he was falling in love with Justine.

I've gone into the disadvantage and difficulty that Black women face when it comes to dating in media and real-life before, but dark-skinned Black women must also contend with colorism in addition to the misogynoir that Black women face. Even in Justine and Caleb's case, there were plenty of people on social media questioning the validity of their relationship and wondering if he was really attracted to her. That attitude reflected Justine's experience early in the season when she struggled to form a romantic connection that the other contestants seemed to make more easily. While many cry foul and assert that everyone has "preferences," we have to acknowledge that racial "preferences" don't occur within a vacuum; they're shaped by society's view of beauty and they almost always work against marginalized people and cultures.

"Racial 'preferences' don't occur within a vacuum . . . and they almost always work against marginalized people and cultures."

When I questioned Justine about her time before Caleb's arrival, she mused that most women tend to compare themselves to others, and although she was "confident in my personality and all that," she felt insecurities setting in when she compared herself to the other women. The other four women in the original cast fall under the Western beauty standards promoted by the fashion industries, television, the internet, and social media, whereas Justine was the sole Black woman and the only dark-skinned contestant, including the men.

"You start to doubt yourself," she admitted. "Even as I was getting ready to go into the villa, my friends were telling me, 'Justine you got this, you're a bad b tch!' So when the reality started to set in, that was when it got tough."

While Justine found an iconic friendship with fellow contestant Cely with the two earning the ship name "Celine" and arguably being the most popular relationship in the villa , her steadfast relationship with Caleb served as an example of a serene love that is often overlooked. Throughout the show, the couple vowed to practice honesty and open communication with one another, addressing their struggles before it became problems and being transparent about what they needed. When Justine felt that she needed more affection from Caleb, she pulled him aside to let him know, and he received it, promising to be better about it. It was part of a concentrated effort to ensure that their relationship could last outside of the villa, Caleb revealed to me.

"We tried to approach our relationship patiently. It's kind of tough because there aren't any of the distractions and noise of the outside world in the villa, and you can get lost in your relationship at a very rapid pace that you might not stick true to after," he said. "So we tried to keep our perception on the outside world and being patient. Justine and I are naturally good communicators with one another, we get each other and that really helped us to stay open. We encourage each other to speak our minds and that helped foster our communication."

"It's kind of tough . . . you can get lost in your relationship at a very rapid pace that you might not stick true to after."

It's a romance that suffered no dramatic setbacks or blowouts onscreen, which is generally the type of relationship the media tells us is exciting and passionate. But no one could say that the winning couple isn't passionate, especially after that striptease challenge insert winking emoji here . "Jaleb" is a romance that shows love doesn't have to be hard, even if it is work. It's not a constant struggle, it's healthy, it's being vulnerable and open, it's learning to redefine your idea of love, it's giving your attention and your devotion and receiving the same. Not to put any pressure on their shoulders - they're not the only couple in the world who has a healthy relationship. But they are a great example for Black couples looking for representation and hope.

Now that they've won Love Island, the work doesn't stop! The two say they have trips in mind, but they're taking the time to enjoy being alone right now. "We want to take a moment to ourselves without any cameras or mics and just do us for a little while," Justine confessed. But even as they get ready to bask in the glow of being truly alone for the first time, they want to thank the fans who have been cheering for them since day one.

"It's funny because every time there was a challenge where we got to see the outside's opinion I would be crying like, 'I don't know what they're going to say, I don't want this,'" Justine said laughing. "So to see they have this love and support for us definitely helped to carry the both of us through. Coming into this you have this fear of 'How will I be perceived, what will everyone think?' To receive that love is the cherry on top of coming out of this with everything that we were looking for. Thank you, thank you to everyone!"