Levy talks multi-country journey from Israel McDojo to the UFC 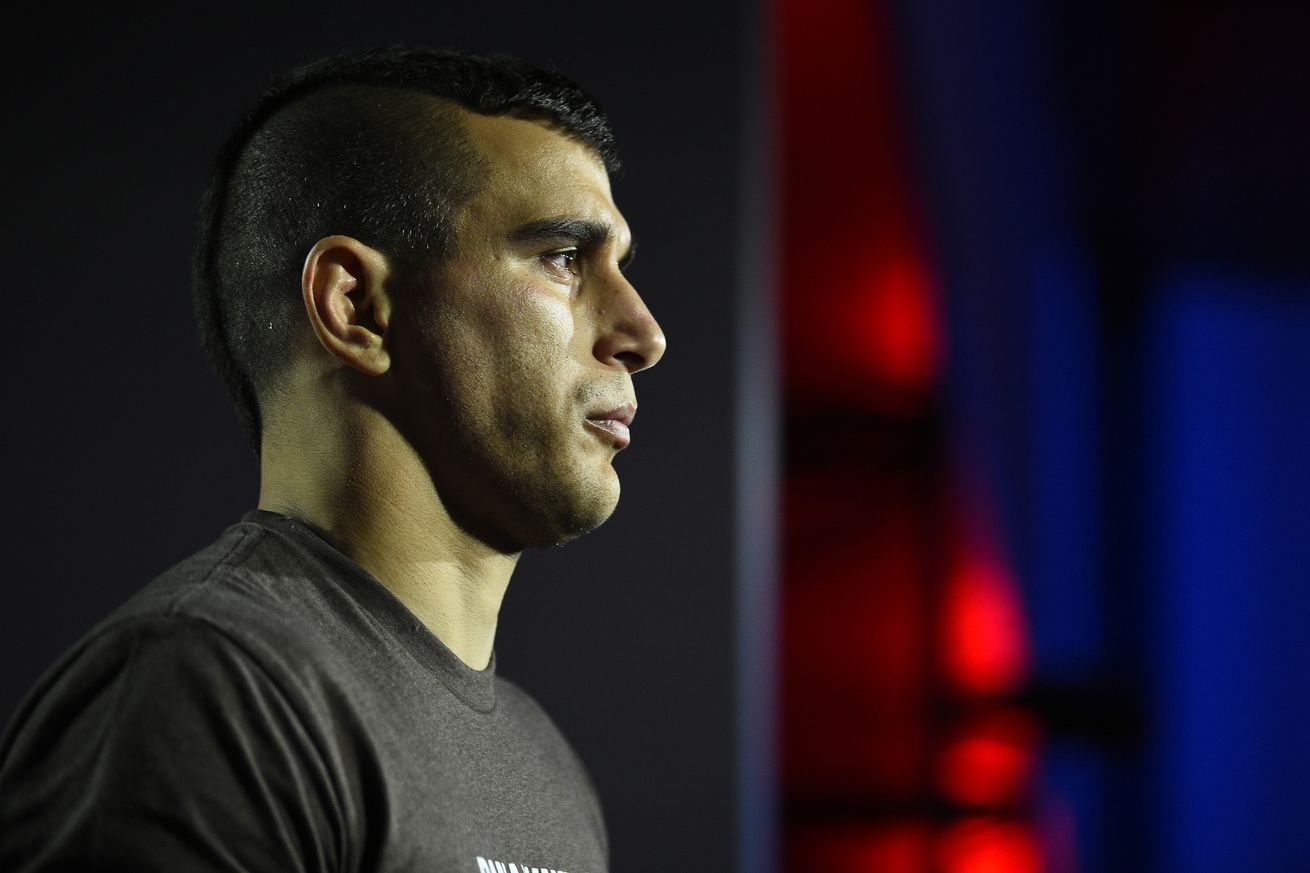 Get the Full StoryNatan Levy, unbeaten MMA featherweight and new UFC lightweight, before his bout on DWCS week 9 at the UFC Apex in Las Vegas Photo by Chris Unger DWCS LLC Zuffa LLC

Paris-born Israeli Natan Levy drew attention after finishing a fellow undefeated prospect on extremely short notice to earn a UFC contract 2020 is a great year. Well, it s been great to me, Natan Levy 6-0 MMA says, which goes to show you that life is existential by essence, and your mileage may vary.

Levy, a 29-year-old Israeli, picked up an impressive technical submission win over Shaheen Santana in Dana White s Contender Series. Levy, who spent his amateur and professional career at 145 pounds, took the fight at a 160 catch-weight, on just three days notice.

Had it not been for the circumstances surrounding 2020, Santana s original opponent, Landon Qui ones wouldn t have pulled out of the match, and Levy wouldn t have gotten the late notice call from the UFC.

BloodyElbow caught up with the Las Vegas-based undefeated prospect shortly after securing a UFC contract. Levy, who was born in Paris in 1991 and is an Israeli citizen, is fluent in three languages: English, French and Hebrew. This interview was conducted in and is translated from Hebrew.

There were some jitters, sure, Natan Levy says about the hours leading to the DWCS match. Usually I m not nervous before fights, this time I was a little extra-nervous. But when I m in the dressing room and there s a guy next to me and he s starting to shout and to go berserk and slap himself, I realized I m not that nervous.

The apprehension was mostly about the unknown. I don t care so much about getting knocked out, or losing. I m going up there to fight and do my best, and this is where it ends. I never feel like I must win this fight, or like I m going to win for sure. I only mostly fear of embarrassing myself, or conducting myself cowardly, in a way which will represent myself or Israel in a cowardly manner. Once I got in the cage, it was all left outside. I believed I was going to win, and implemented our game-plan.

Levy, who spent his career for the Las Vegas based LFA, is now slated to be the third Israeli to fight for the UFC.

Moti Horenstein fought in the SEG-owned early days of the organization, and featherweight Noad Lahat fought in Fight Nights and Fox shows from 2014-2016, before WME-IMG took over. Lightweight Ido Pariente made an appearance in the TUF tryouts, but was eliminated by eventual season 8 winner Efrain Escudero. Between these fighters, Lahat found the most, albeit moderate, success. Horenstein fought the toughest competition for the respective era but none from Israel have left a meaningful UFC legacy yet.

Levy relocated with his then girlfriend and now wife, Dana, from central Israel to Las-Vegas in 2016.

Levy, who never even trained in MMA until 2013, quickly went 4-0 as amateur. In 2018, he chose the UFC feeder league, LFA to start his pro career. Soon after, he received an offer to compete in an Israeli Bellator show, but politely declined in order to continue pursuing his UFC goal.

This short notice win at DWCS made that a reality.

Do you feel like a representative of Israel in there or are you fighting for your own flag?

I won t proclaim myself a representative of the country, but it sort of became that way. People are saying that, so I accept it. Anyway even if I m going to an hotel in Turkey I represent Israel to them, so certainly on TV .

Dana White mentioned that they ve been waiting for a good Israeli fighter and that you have their lawyers and Hollywood agents going crazy. Do you feel your nationality not being another American or Brazilian fighter helped promote you more?

Being Israeli helped me get some spotlight. In the end, it s all business and if you can open up a marketplace then they re happy. But I also have no doubt that I didn t receive anything free or easily, that I deserve it and that I worked very hard for it .

Any particular fighter who s style or career your looking to emulate?

I don t want to emulate no one. But look up to, maybe GSP. He s the man. His comportment out and inside the ring is the most class I saw in the UFC, and I d rather walk that way than any other.

A featherweight up until the Santana catchweight, Levy was convinced by that fight to move up to 155 lbs and start his UFC career there.

I can make 145 but it takes a lot of effort. I m only going to take fights at 45 now if they re highly interesting or profitable to me .

What s your statement of intent for the lightweight division?

My statement of intent is getting a number next to my name as soon as possible.

You are not a trash-talker.

No. Well, I am not an artificial trash-talker, if someone will not speak nicely, I believe I ll know how to speak back .

Natan Levy s UFC origin story is rather interesting, and not only because of his rather stand-out nationality. Levy, the youngest brother of three, emigrated from Paris, France to Herzliya, just on the Northern outskirts of Tel-Aviv, Israel, at around four years old.

To the best neighborhood, at first, but slowly things went downhill.

Levy s father is a black belt at Judo. But it was a combination of martial arts movies Bruce Lee or Rocky, it didn t matter and some scuffles in the streets that sent Levy to try out some Martial Arts gyms when he was 14.

I was looking to change, to get strong, and to learn bad ass moves, he said.

Around a year later, he eventually settled in a Kung Fu place.

That was sort of a McDojo. We would just beat the life out of each other, without knowing how to do it really. Too much, hard, frightening training. Very Cobra Kai, but it strengthened me immensely mentally. What I m doing now is relaxed in comparison. There were practice sessions we would ride to the gym scared, it was much worse than going into the MMA practices at first.

The Karate movement is more instilled in me to this day, compared to the Kung Fu, Levy said. The mindset is still accompanying me to this day; self discipline, and not giving up. Just so you get how all-in I was for it: after basically a year of training, I was already going to Japan. My mother told me yea right , all of a sudden I show up to her with a flight ticket. At 16, I was gone for a month, and at 18 for three months, and at the end of that period I got the black belt in Okinawa.

How did you get from Okinawa to Vegas?

I watched UFC, TUF, Pride when I was very young, but since getting into the Karate I took less interest in it. But when I got back from Okinawa, around UFC 100, in 2009 or so, a friend re-introduced it to me. I really wanted to do MMA but it felt like I missed that train, and that I m already in Karate. So it was Machida that lit a light for me that maybe I can do that, too. At 21, 22, I was already a 3rd Dan Karate, and had a few small dojos going, and students I liked and liked to teach. But the MMA thing kept nudging in my head. And up until then I haven t really tried any other different art.

But I decided I want to do it. And my coach told me: You have to choose between this or Karate . I said OK, and that wasn t easy at all, he was like a big brother for me I choose MMA .

At 22, I flew to the states. I was introduced to Jimmy Giff ord , who took me up as project from nothing. I came to his gym, a fancy gym, a private gym. He puts me through the motions, and at first he tells me to go into fighting stance I took on a Karate side horse stance. He said Oh f k . We re still laughing about that. He saw potential but he saw that I was rough.

He had like 30 heavy bags there and we were just us two. In Karate back home, we were 30 guys on 2 heavy bags. He tells me to work the bag, so I do what I know, throwing 50 spinning kicks in 20 seconds, and I m beat in a minute, and I see the clock is saying 4 more. And he held mitts for me, that was a whole new world. He told me, 10 minutes on the rope man, I couldn t walk after that for a week. Today I m fine with the jump-rope. I m a yellow belt with two stripes at that .

At first, with Gifford, Levy found himself mostly spending his time practicing boxing and adapting and retooling his Karate background for a realistic fight in a cage.

I got very attached to him. And only later I found out he trains Forrest Griffin, Frank Mir, Miesha Tate, and everyone comes to his gym. I flew to Vegas about a year before that, just to watch Frank Mir fight. I was a big fan, and all of a sudden he s giving me a ride home.

If Levy started late in MMA, he tries to make up for it in hard work and determination. Usually, he has to be asked by Gifford and now also by John Wood at Syndicate MMA to train a little less, not more. Levy, like so many others, fell in love with Jiu-Jitsu, and all the finishes so far in the Karateka s short pro career came via submission.

He feels more natural grappling compared to any other part in the fight game, although he recently developed a very meaningful counter left hook, and of course, the Okinawa style kicking has been instilled in him by repetition. That actually made getting fights early in his amateur career tough, as fellow 0 and 0 s would see him kicking on his Instagram account and opted out. Eventually he had to close his 10K strong account, just to get going.

Two years into his pro career, Levy now finds himself in the UFC. Just how far his mileage will go, is now to be found out.