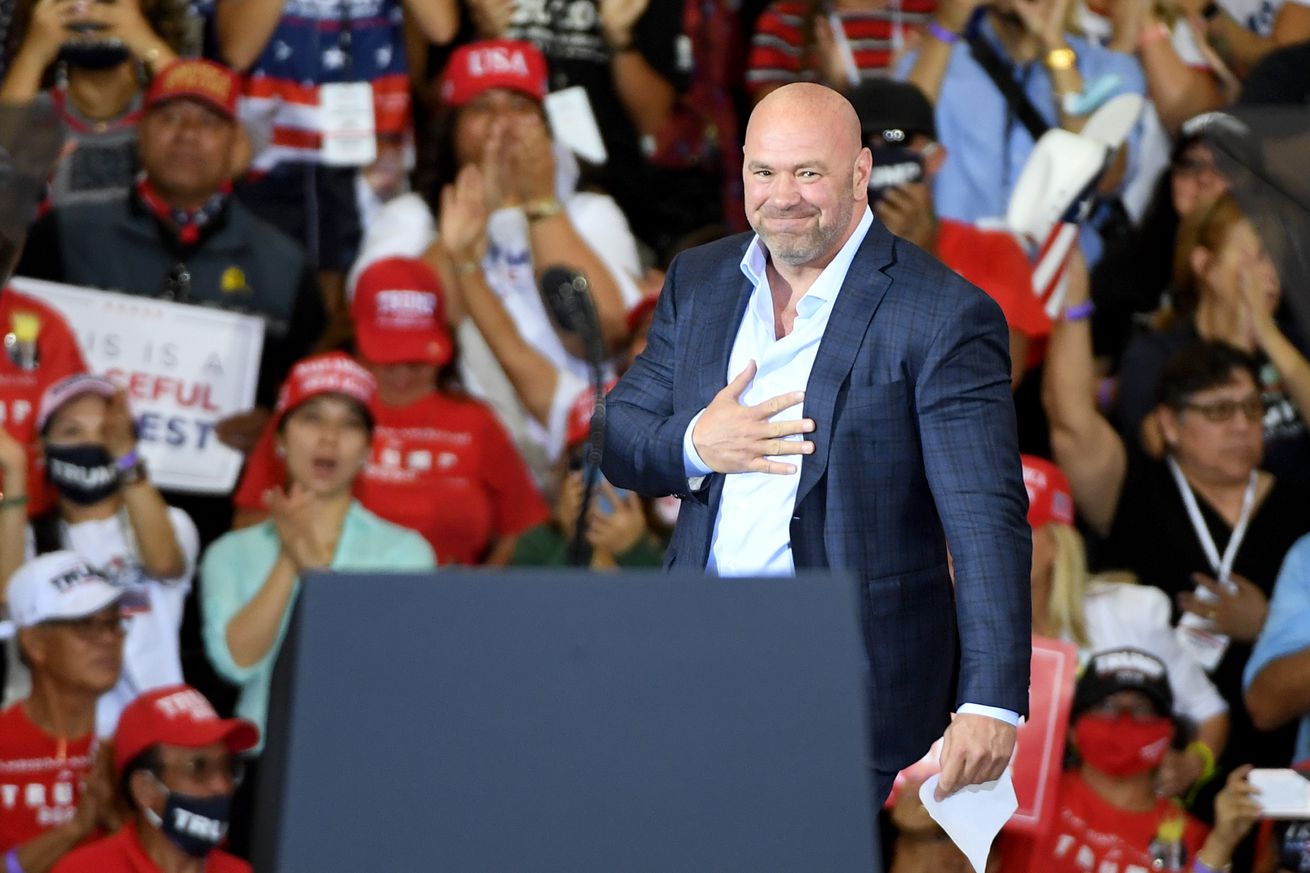 In the aftermath of the failed insurrection at the Capitol, Karim Zidan delves into the UFC s role in spreading President Trump s agenda, as well as the proliferation of far-right ideologies among its fighters. The scene opens at an airport in New Jersey.

A plane emblazoned with the TRUMP logo appears with a young Donald inside. Cue the music, classical, which rises to a crescendo. A montage of Trump moving through casinos surrounded by clamoring reporters and celebrities before cutting to Dana White seated in his Las Vegas office. He has something to say about his dear friend.

Donald Trump is a visionary, the UFC President said during an interview for a UFC- produced documentary on Trump s role in the UFC s modern genesis. This guy is a fighter, an entrepreneur. If he sees something and he gets it, he s not going to be afraid of what anyone else thinks. He s a guy you don t want to be against.

Not only did the documentary provide an overview of Trump s history with combat sports, it emphasized the peculiar relationship between Trump and the UFC. However, as of today, a quick search for the Combatant in Chief documentary yields no results. The UFC appears to have removed the Trump propaganda documentary from all its platforms. Whether this has been done in an attempt to distance themselves from the president, or as part of a routine clean-up, remains unclear.

Deletion aside, the UFC has long presented itself as a haven for Trump supporters and far-right athletes, as well as a platform for Trump s ideology. Now, in the wake of the failed insurrection on the U.S. Capitol on Jan. 6, 2021 the first time the Capitol had been breached in more than 200 years the UFC has to reckon with its role in empowering a president who incited a coup on the nation s capital.

The bout was charged with racial tension. During the pre-fight press conference, Woodley responded to every single question posed to him by repeating the phrase Black Lives Matter. He also donned a BLM shirt and a red hat that said, Make the Racists Catch the Fade Again. Covington, on the other hand, fielded questions in a red Keep America Great hat and used the opportunity to push his pro-Trump talking points.

Then, after stopping Woodley in the fifth round of their UFC Fight Night 178 main event, Covington used his victory to target BLM, calling those who participate in the movement lifelong criminals and terrorists.

You know the Black Lives Matter is a complete sham, Covington said during his post-fight speech. It is a joke. They are taking these people. They are complete terrorists. They are taking these people that are criminals. You know, these aren t people that are hardworking Americans. Blue collar Americans. These are bad people. They are criminals, you know, and they shouldn t be attacking police. You know if you are breaking the law and you are threatening the cops with weapons. You know, you deserve to get what you get.

Despite Covington s baseless and politically charged tirade drawing criticism from fans and pundits alike, the UFC did not take any action against the fighter. Instead, White defended Covington s decision to voice his beliefs.

These guys all have their own causes, things, their own beliefs, White said at the time. We don t muzzle anybody here. We let everybody speak their mind. I don t know what he said that was racist. I don t know if I heard anything racist that he said.

White s laissez-faire approach to regulating speech emphasizes the promotion s position on the political spectrum, preferring to profit from racial conflict than to regulate hateful and false statements used to promote the fight. Instead of taking action against Covington s controversial speech, the UFC on ESPN broadcasted Covington receiving a congratulatory message from the president after his win.

To add to the political drama, the makeshift BLM vs. MAGA cage fight took place exactly one month prior to the 2020 presidential election a time when the UFC was hard at work helping Trump secure a second term in office.

Throughout the 2020 election cycle, the Trump campaign enlisted UFC fighters to help spread misinformation about his opponent, Joe Biden. One such example was the Fighters Against Socialism bus tour orchestrated by Donald Trump Jr.. The four-part event, which took place in October 2020, take place across the state of Florida, including Tampa, Orlando, Coconut Creek, and Miami, and was headlined by UFC star Jorge Masvidal. The Cuban-American fighter son of a Cuban immigrant who fled his native land on a tire relayed the horrors of socialism while imploring attendees not to allow the Democrats to destroy American freedoms.

Obviously I am not a politician, Masvidal told the crowd in attendance. I may not be schooled in a lot of these political issues like some of you, but I do know Latinos. Latinos are not lazy people looking for a handout. Latinos don t want free stuff, we want freedom.

Trump brought in several other MMA fighters for his Latinos for Trump events across various cities, including former UFC champions Henry Cejudo and Tito Ortiz, a known conspiracy-monger and QAnon adherent.

Trump also enjoyed vehement support from UFC President Dana White, who campaigned for Trump in 2016, and again on numerous occasions in 2020. White spoke at rallies in Nevada and Colorado, gave a speech at the Republican National Convention, and even did an ad spot imploring people to go out and vote for Trump.

We need to re-elect Donald Trump, White told a Las Vegas crowd in September. He put America first and made America strong again.

Then, in the wake of Trump s electoral defeat, several of the same fighters took to social media to spread misinformation about alleged voter fraud. Several of Ortiz s Instagram posts have been flagged for misinformation, while Masvidal continues to label Biden a communist and even retweeted a photoshopped picture of Al Gore being proclaimed the winner of the 2000 presidential election. Covington and former UFC champ Eddie Alvarez both posted voter fraud claims, while Ultimate Fighter contestant and Proud Boys supporter Tara LaRosa proclaimed a civil war is coming. Many others joined these conversation.

It should be noted that none of the aforementioned fighters condemned the insurrectionists following their attack on the Capitol. Instead, Masvidal threatened to leave Twitter after the social media platform permanently banned Trump. This time, however, his fans did not seem to care.

While many of the fighters who subscribe to far-right ideologies are not current members of the UFC s roster, the promotion has made no attempt to sanction any of their active fighters who spread dangerous conspiracy theories. Even Don House, the UFC official who wore the far-right QAnon conspiracy theory slogan on his uniform during an ESPN broadcast, was not punished, even though he was promoting a movement deemed a domestic terrorism threat by the FBI.

In the days leading up to Christmas Eve, Dana White tweeted a propaganda video produced by the UFC which targeted journalists and media outlets who criticized the promotion s decision to hold events during the early stages of the coronavirus pandemic.

The video was little more than a propaganda showpiece a montage of journalist faces with the word WRONG emblazoned over them, out-of-context headlines and quotes, as well as snippets of White saying things like I don t give a fuck while orchestral music played in the background. Author s note: My March 2020 article for The Guardian was included in the video, alongside my name highlighted in red.

Instead of celebrating the promotion s profitable year, White instead published an attack video for the sole purpose of discrediting journalists and making them the target of hate and ridicule. While it was not the first time that the UFC has targeted journalists for their reporting White once targeted former Sherdog and SI journalist Loretta Hunt in an expletive-filled online rant it was the first time the promotion created an entire propaganda video to settle a score with reporters. This is yet another parallel between White and Trump.

These men agree on far more than just their mutual distaste for the media. The UFC head honcho spent the last five years rebranding Trump as a fighter and a pivotal reason for the UFC s survival and success. He defended Trump s policies, even at the expense of his multicultural UFC roster, and used his status as the UFC president to campaign for Trump. He took groups of UFC fighters to Trump s rallies and gala dinners, and was more than happy to push Trump s political talking points during ad spots and RNC appearances. And now, in the wake of one of the most significant attacks on U.S. soil, White has yet to disavow the insurrectionists or the president who incited them.

It is safe to assume that no other American sports league has invested as much effort as the UFC has in promoting Trump. The promotion s willingness to spread propaganda and disinformation while gloating about its ties to the disgraced president emphasizes its role as the sports-arm of Trump s presidency. Unless the UFC chooses to disavow the president following his attempt to incite a coup at the Capitol, the world s leading MMA promotion will forever be associated with this dark time in American history.

The UFC has not responded to the author s request for comment.