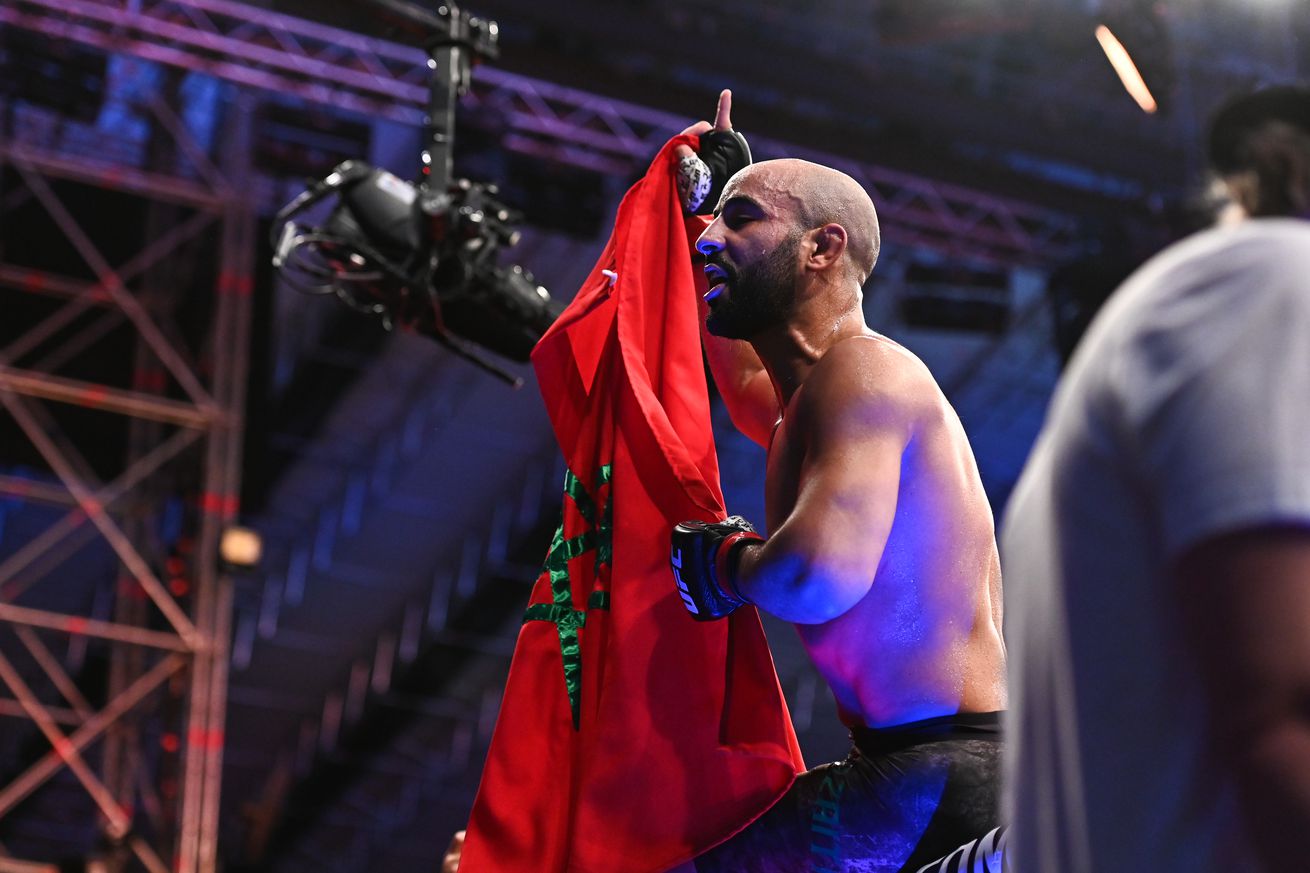 Karim Zidan delves into the likely reasons behind the UFC s decision not to release Ottman Azaitar. He s gone; he s no longer a UFC fighter.

Those were the words uttered by UFC President Dana White following a health and safety breach that involved UFC fighter Ottman Azaitar. The fighter had been into contact with an individual outside the UFC s bubble in Yas Island, Abu Dhabi, last month and reportedly attempted to sneak the unauthorized individual into his room by shimming across multiple balconies.

The UFC removed Azaitar and his team from the premise and canceled his scheduled fight against Matt Frevola at UFC 257. White later told various media outlets that Azaitar would be released from his UFC contract for violating COVID-19 protocols.

While Azaitar did not release a public statement, he shared a verse from the Quran on Instagram that read: Perhaps you hate something and it is good for you, and perhaps you love something and it is bad for you. Allah knows, while you know not. The verse seemed to confirm that the Moroccan-born fighter s UFC career had come to an unceremonious end.

Now, less than a month removed from the incident, the UFC has opted to give Azaitar a second chance a decision that caught fans and pundits by surprise given White s earlier statements.

While much of the credit for salvaging Azaitar s UFC career fell on his manager Ali Abdelaziz, there were several other factors that likely impacted the UFC s eventual change of heart, including Azaitar s friendship with the Morocco s King Mohammed VI, and his status as one of the most promising fighters from the Middle East and North Africa region MENA .

The Azaitar brothers are not your average UFC fighters.

Born in Cologne, Germany to parents who immigrated from Morocco, Abu and Ottman Azaitar attended a controversial Islamic school funded by Saudi Arabia, had a history of criminal activity in Germany, made friends with local rappers and celebrities, and eventually became two of the most recognizable athletes from the region when the brothers made friends with Morocco s King Mohammed VI.

The unlikely friendship began in 2018, shortly after the king quietly divorced Princess Lalla Salma. According to Moroccan media reports, King Mohammed VI was keen to meet with Abu and Ottman because of their achievements in MMA Abu was the first Moroccan national to sign with the UFC while Ottman had just claimed the Brave FC lightweight title and extended his unbeaten record to 10-0 . The brothers became frequent visitors of the king, who took them on vacations and later allowed them to renovate one of the unused palaces in Tangiers into a sports club.

Determined to prove their fealty, the Azaitar brothers began to post pictures of themselves alongside the king, each accompanied with captions that expressed admiration and respect for the monarch.

Your Majesty, Our dear King Mohamed VI .. I can t thank him enough for everything he has done for us, Abu Azaitar wrote on Instagram in June 2018. He is one exceptional role model for all of us. We incredibly respect and appreciate him as a great personage. Both the realest sportsman himself and a one of the biggest supporter of sports! My beloved King, may Allah take you and your family under his protection and always keep you healthy! What a pleasure and honor to be side by side with our king, who we love so much.

As the Azaitar brothers friendship with the king intensified, they began to take on more official roles within the Moroccan government. In 2018, Abu Azaitar was reportedly made president of the Green March organizing association a group responsible for the annual celebration commemorating the Nov. 6, 1975, date when 350,000 Moroccans marched into the Sahara to protest Spain s century-long occupation of the Western Sahara. The celebration usually takes the form of a football gala match featuring international football stars such as Luis Figo, Rivaldo, and Rafael Marquez, and has been criticized as an attempt to sportswash Morocco s occupation of the Western Sahara and distract from human rights abuses.

The Azaitar brothers friendship with King Mohammed VI has also helped further their respective careers. For example, after hearing that Abu Azaitar was having trouble entering the United States due to his criminal past, the king reportedly grew upset and decided to interfere to help the fighter secure his visa, which he eventually succeeded in doing.

While it remains unclear whether King Mohammed VI interfered to salvage Ottman s UFC career, a cryptic tweet from manager Ali Abdelaziz seems to suggest that some mysterious figures were involved: Very grateful to Dana White and humbled by this decision. There are others I want to thank. They know who they are and we appreciate them very much this was done way above my pay grade, Abdelaziz tweeted on Feb. 20.

The sentiment was repeated by Ottman, who added, surround yourself with great people. I m always grateful to everyone who was involved in this situation, the fighter wrote last Saturday on Instagram.

While the UFC has not shared its reasoning behind the decision to retain Azaitar, it is likely that his association with Abdelaziz a former NYPD FBI informant who is now one of the most powerful managers in the sport as well as his friendship with King Mohammed VI played a part in the final ruling. However, another key factor lies in the UFC s newfound commitment to its partners in Abu Dhabi.

A Muslim Star in the Making

In 2018, the UFC announced a five-year partnership with the Department of Culture and Tourism DCT Abu Dhabi , which guarantees a constant stream of title fights in the Emirati capital until 2024.

Unlike the previous two Abu Dhabi based UFC events in 2010 and 2014, UFC, which took place in partnership with Flash Entertainment, a live events and promotion company that owned 10 of the UFC, the UFC s partnership with Abu Dhabi is sponsored by the local government and is being used to enhance economic opportunities in the emirate.

The partnership began with UFC 242, which took place in a bespoke 13,000-seat arena, and was headlined by recently retired UFC lightweight champion Khabib Nurmagomedov. The partnership blossomed further as the two reached an agreement to establish a 10-mile safe zone for the UFC on Abu Dhabi s Yas Island in response to the coronavirus pandemic. Abu Dhabi paid a hosting fee, built the necessary infrastructure, and covered expenses such as COVID-19 testing, air travel, accommodations, and catering among others. Since then, the UFC has hosted 12 events on Yas Island during a six-month period.

Abu Dhabi is going to be looked at as the new fight capital of the world, White told local UAE media in July 2020. It used to be Las Vegas. It definitely isn t Las Vegas right now.

Given the flourishing relationship with Abu Dhabi, which has helped the UFC maintain its business and hold international events amid a pandemic, the promotion will likely look to extend the fruitful partnership as long as possible. Ideally, this would involve a stead stream of Muslim and MENA stars that the UFC can promote to the audience in the region. However, there are few such stars within the organization, especially following Nurmagomedov s retirement.

As an undefeated Moroccan fighter with an exciting style and promising potential, Ottman Azaitar fits the bill of a potential UFC star in the region. Unlike his brother, whose lone UFC performance to date ended in an unimpressive unanimous decision victory, Ottman has compiled a 2-0 record within the promotion, winning each by first round knockout. In total, the Moroccan native has accumulated 10 knockouts and two submission wins in a total of 13 fights, making him one of the MENA region s top prospects and a potential future champion.

The UFC s decision to offer Azaitar a second chance can be interpreted as a pragmatic, business-savvy verdict that will likely pay dividends given the promotion s expanded role in the Middle East. Azaitar s exciting style and Muslim background could make him a star in the Middle East, while his ties to King Mohammed VI could open the doors for the UFC to host its first event in Morocco, extending its reach into North Africa for the first time in the company s history.

Despite Azaitar s decision to break COVID-19 protocol in Abu Dhabi, his overall value to their business ensures that the UFC will continue to promote him in its pursuit of profit.