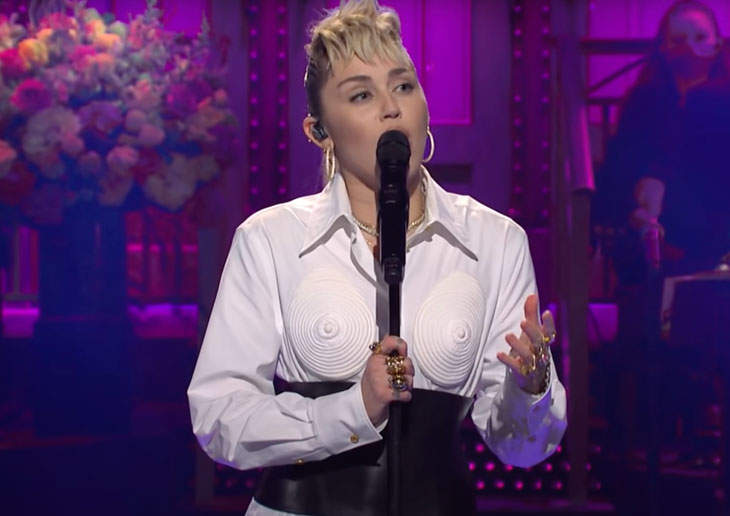 Get the Full StoryFor weeks, we ve been threatened that Saturday Night Live was going to inject itself with massive amounts of potent insufferableness and it happened last night when Elon Musk finally hosted the show while Aidy Bryant and Bowen Yang made a mental note to research the best dental implant surgeons in the area as they grit their teeth down to dust . Elon Musk hosted the Mother s Day episode of SNL, which was fitting since while watching it, I asked myself, Motherfucker, why you are watching this mess?

But while Elon Musk got all the attention leading up to last night s show, Miley Cyrus stole it from the beginning by working an extremely modest and demure chichis shirt as she yodeled out her godmother Dolly Parton s song Light Of A Clear Blue Morning during a tribute to mothers. Maybe Miley wore that elegant Gaultier-esque unless it IS Gaultier white tit shirt because mothers breastfeeding deflated chichis? Or because she wanted to pay tribute to Dolly Parton s iconic lily-white titty balls? Or she just wanted to snatch the spotlight from Elon? Or all of the above!

SNL opened with cast members and their real-life moms telling jokes in between Miley serenading them while wearing a big ass black belly button belt and a white button-down t-shirt decorated with swirly boobs that also sort of look like cinnamon rolls served at a KKK rally. At the end of the cold open, the woman responsible for making Miley Cyrus house look like Las Vegas just barfed all over it, her mom Tish Cyrus, joined her:

Then Elon Musk came out and declared that he s the first person with Asperger s to host SNL, which is the opposite of the truth since Dan Akroyd, who has been open about being diagnosed with ASD, hosted SNL in 2003. Never mind that Dan Akroyd erasure, Elon told the jokes that were written for him before his mom came out:

As for the skits . Well, Elon should stick with his day job of being an egomaniacal tech billionaire, union buster, and COVID misinformation spreader because his performance was as confusing as his latest child s name and he has the comedic timing of a dried tonsil stone. Exhibit A: Here s the first painful sketch of the night called Gen Z where everyone basically talked in TikTok.

Nearly all of the sketches were a wreck, but there was a winner in SNL s parody of Mare of Easttown, that HBO show that I always call Mare of Winningham because I forget its damn name. Kate McKinnon earned her ass another Emmy by spoofing Kate Winslet s Delco accent along with the other cast members:

Miley was, of course, the night s musical guest, and she changed out of her titty shirt and into a look that screamed, 90s raver getting attacked by a Muppet, while performing Without You with The Kid LAROI:

And Grimes, Elon s girlfriend and the mother of Baby CAPTCHA Code, popped up as Princess Peach in an LSD-induced skit where Wario went on trial for murdering Mario with a banana peel. Maybe this sketch was the writers commentary on the working conditions at Tesla factories because it was horrible!

And while many probably didn t laugh much during last night s SNL, Lorne Michaels got the last laugh, because Elon s episode got the biggest ratings since Dave Chappelle s episode in November. Elon also achieved the impossible, because people have said before, There s no way SNL can get worse, and it did! So congrats on that, Elon!