Jose Ramirez vs. Josh Taylor preview: All the belts are on the line 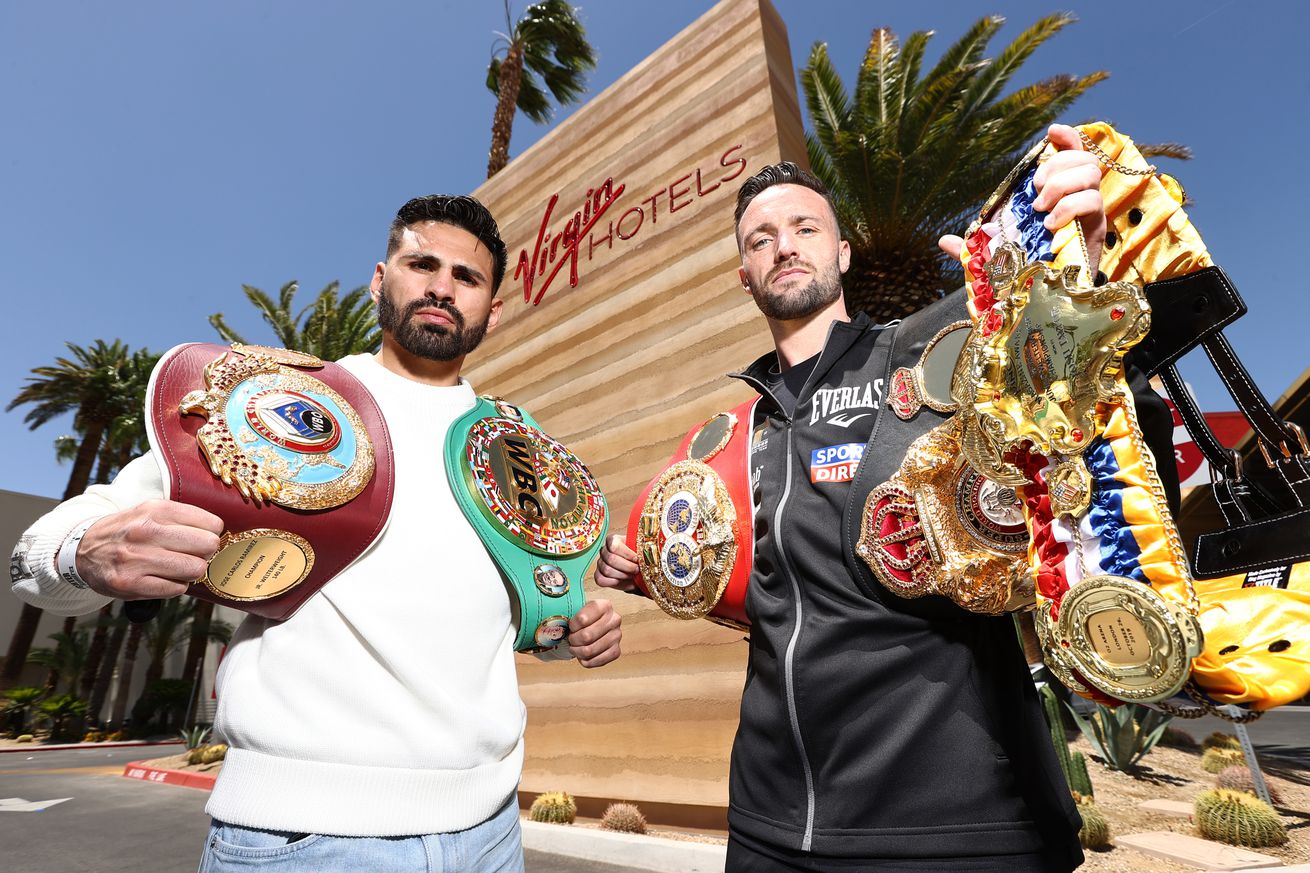 Get the Full StoryJose Ramirez L and Josh Taylor R pose during their press conference for the Undisputed Junior Welterweight Championship outside at the Virgin Hotels Las Vegas on May 20, 2021 in Las Vegas, Nevada. Photo by Mikey Williams Top Rank Inc via Getty Images

Josh Taylor and Jose Ramirez battle for the undisputed super lightweight title. Will Taylor s slick boxing or Ramirez relentless pressure prevail? Boxing will have its only current undisputed champion well, barring a draw this week end after WBA and IBF champion Josh Taylor 17-0, 13 KOs battles WBC and WBO champion Jose Ramirez 26-0, 17 KOs for super lightweight supremacy. Taylor first scored a a notable win when he beat former WBC champion Viktor Postol in 2018, he then won the World Boxing Super Series tournament and established himself as the top fighter in the weight class in 2019. He took the IBF belt from Ivan Baranchyk in the semi finals and unified it with the WBA title in the final, a great fight against Regis Prograis.

Ramirez won the vacant WBC belt against Amir Imam in 2018 and made a couple of solid defenses against Antonio Orozco and Jose Zepeda. He then unified the title with the WBO belt by brutally stopping Maurice Hooker. He added another quality win by narrowly defeating Postol last year.

Taylor is a slick southpaw boxer who does his best work on the outside but has shown against Regis Progais that he is also very comfortable and crafty on the inside. He knows when to tie up, when to push off and create punches opportunities off breaks. Ramirez is probably the best pressure fighter in the division and has a particularly good left hand. He doubles off the jab and flows into left hooks very fluidly and if an opponent shells up, he can uppercut off of body hooks to smash the guard through the center. However, he struggled to break the distance against the outside boxing of Postol and Taylor s southpaw stance could make his trademark left hand combos very hard to land consistently. Taylor s superior versatility and defense means he ll have the advantage at range and be able to at least handle himself on the inside. Ramirez is a top fighter and clearly has a shot but the stylistic match up should favor the Scot. Whatever the result, this is a very interesting style mach up between the two best fighters in the division and likely one of the best fights boxing will have to offer this year.

The winner will be the rightful king of the division and a legitimate top pound-for-pound talent.

In the co-main event, also at super lightweight, Jos Zepeda 33-2, 26 KOs returns to the ring against veteran Hank Lundy 31-8-1, 14 KOs . Zepeda is coming off of one of the best fights of 2020, an absolute war with Ivan Baranchyk which saw each fighter go down 4 times and which Zepeda won with a spectacular 5th round knockout. Zepeda s three-fight win streak also includes a good win over former WBO lightweight champion Jose Pedraza. Lundy s last mainstream fight was a 5th round TKO loss to the great Terence Crawford in 2016. He s gone 5-2 since with the most notable win coming against the ancient Demarcus Corley and a couple of losses to prospects Zaur Abdullaev and Avery Sparrow.

At 37, Lundy is in the twilight of his career and Zepeda, whose two losses came in title fights, looks to be on the best run of his career and poised to make a run at a belt. A win here should set him up as a potential opponent for the main event winner should he stay at the weight or a shot at the belts left vacant if the undisputed champion were to move up.

The rest on the undercard is a bunch of 6 and 8 rounders featuring prospects, the most notable of which is two-time Olympic champion Robeisy Ramirez 6-1, 4 KOs . Ramirez won gold in London and Rio and was amongst the most impressive performers at both games regardless of weight class. He stumbled in his pro debut, a 4 rounder in which he was unable to overcome a first round knockdown against unheralded Adan Gonzalez. Ramirez rebounded with six-straight wins, including a rematch with Gonzalez and although his handlers seem relatively careful with his matchmaking following the upset in his debut, he should be considered one of the top prospects at featherweight.