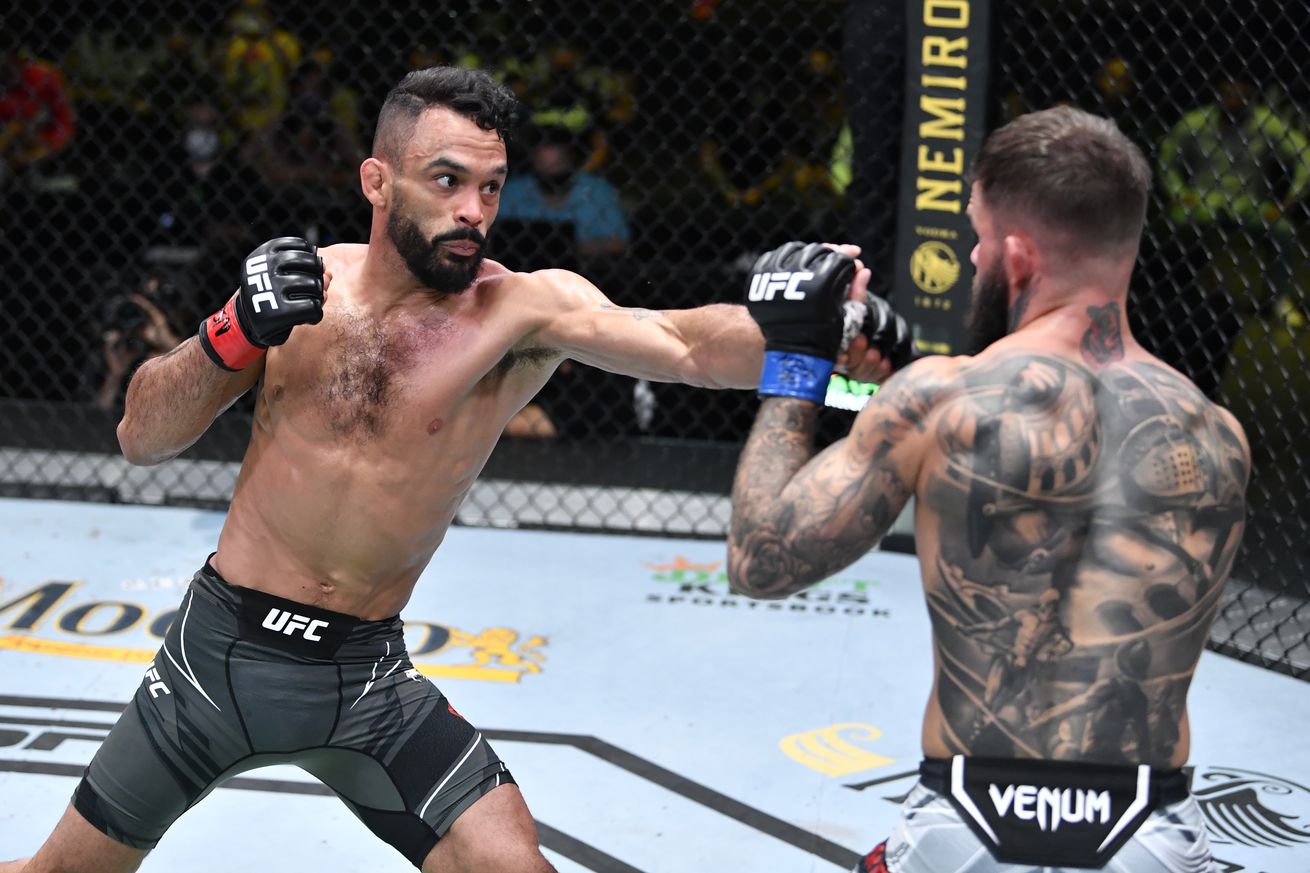 Get the Full StoryRob Font lands a jab on Cody Garbrandt at UFC APEX in Vegas. Photo by Chris Unger Zuffa LLC via Getty Images

Rob Font s jab was front and center in his victory over Cody Garbrandt, but it was his fight mind that made him dangerous. On paper, Rob Font vs. Cody Garbrandt was a lock for a clash that promised to be, at minimum, interesting. Although Font was the favorite, he was still an outsider if you will. After all, it s Cody who once held the belt. However diminished Cody is, and he s had it tougher than most, he s still a 29-year old former champ. If Cody lost, how bad could it be?

Re-watching the fight, or bloodletting rather, the first several rounds were more deliberate and calculated than I remember. I don t know how much of the outcome was Font s improvement versus Garbrandt s decline, but I suspect time will tell. There were moments when Garbrandt s offense looked alive. Just as there were moments when Font looked like his technique was flawless. But there weren t enough collisions between Garbrandt s offense and Font s technique for me to say it how of the outcome belonged to one thing more than another.

Nor do I think it matters. Sober play-by-play s are never about the broader narrative. It s about what happened, and how. None of these broader narratives change the in-cage dominance Font showed. So let s talk about it.

One - Slaying starts with stance

Even though it s a fight, not everything needs a Michael Bay-esque race to hook the audience. Fighting is not a theme park no matter how exciting or violent , built on nothing more than raw motion. Aggression is a nebulous term in prizefighting. Or in sports, really. People hear the word aggressive and immediately play a quick game of word association: reckless, angry, moving forward, etc. But like all words, there are layers within meaning. The better understood, the more complexity you find, and the more intelligently you can apply it. If we take aggression to be a state of mind, a rhythm, and a type of thought process well that s different.

It s that sense that Font was aggressive early on. Not because he threw punches aggressively, but because he leaned his body aggressively. Notice within the first minute how much Font is heavy on his front foot, torquing his body for shots he could throw but didn t. Stance, just like punches, are investments of their own. Forward posture means you re invested in changing angles, holding your ground, and staying tight to the opponent.

As he Font pawed with the jab early, he landed a beautiful straight right early on, but it was more about the touches and posture than the fists cranked along Garbrandt s jaw. Eventually Font opened up his punches with feints rather than outright strikes. To Cody s credit, he actually minimized some of this with takedowns. Garbrandt s wrestling game has been a feather in his cap for some time, and it s something our own Ed Gallo broke down brilliantly before the fight. So while Font was laying down all the breadcrumbs for a decisive victory, the first round was by no means a cakewalk.

Cody initiated the second round with the takedown. You have to wonder how much mileage he could have got out of his wrestling if he had either stuck to it, or ignored it completely. On the surface, change-ups can be crucial, but they re also surface rhythm. Depending on the opponent, it can be nothing more than wheelspinning.

It proved to be the latter, watching it again. Font was shockingly adept at being fluid on his back, able to keep Cody off and keeping him from settling into a ground and pound posture. Font momentarily went for a kimura, and eventually used it to sweep Garbrandt.

It s funny. Round two seemed to be the round where Font went from landing the jab to chambering it. The difference is crucial: rather than establish violent setups, Font was looking to maintain distance without committing to anything wild. Being aggressive without being aggressive, if you will.

Three - Point of no return

As Matt Damon points out in Rounders, when it comes to Poker, the size of a man s stack is almost as important as the quality of his cards. It s easier and sometimes more prudent to be aggressive when you have more to lose because it also means they have less to give back from pot to pot.

Font played the game to perfection in this round. The fight wasn t up for grabs up to this point or anything, but I liked that Font went for a straight right as soon as the round began. As Cody started to wear, desperation kicked in, and threw more combinations. What was notable was how sturdy Font kept his posture. I looked at this round as the point of no return. Garbrandt seem to offer his best punches, and his best mixups. But at what cost?

Between rounds, Mark Henry was telling Cody to stop headhunting. Go the body! This is code for hey, you re losing the fight, do something else. There s nothing wrong with going to the body at any point in a fight. But if you think of certain strikes and where they re aimed as investments, then the best time to invest is early.

After all, a well-time punch to the jaw can be lights out, at any point in the fight. But a well-timed strike to the liver, late in the fight? Maybe it still does damage, but the body doesn t absorb damage the same way the head does. Chances are, if you re losing, the velocity with which you throw body strikes has less mustard. Meanwhile, Font had leg kicks and body punches at his disposal.

Five - Spitting in the wind

All things considered, Garbrandt put together a noble last stand in the final round. He threw a jab, stood his ground, and landed some heavy strikes. The takeaway from some fans seemed to be that Cody did well given the circumstances. But more importantly, his chin held up!

I don t think that s true. Just because a fighter doesn t get knocked out doesn t mean their chin is holding up . Garbrandt has always had trouble safely closing distance. The fact that he wasn t willing or able to engage is a stronger sign that his durability might be fading than that he at some big punches. That s not to minimize Font s power. It s to underline that the most effective toughness, just like aggression, is not the raw physics of it, but the psychology of toughness too.

A lot will be made about Font s jab. As people should. A lot will be made about Garbrandt s decline. As people should. But fights are as much about physical space as they are about headspace. Two systems are always at work in a fighter s head: the first system is the system of intuition, while the second system is the system of focus, and the contrast between choices. Both of Font s systems were working this weekend. Not so for Garbrandt.