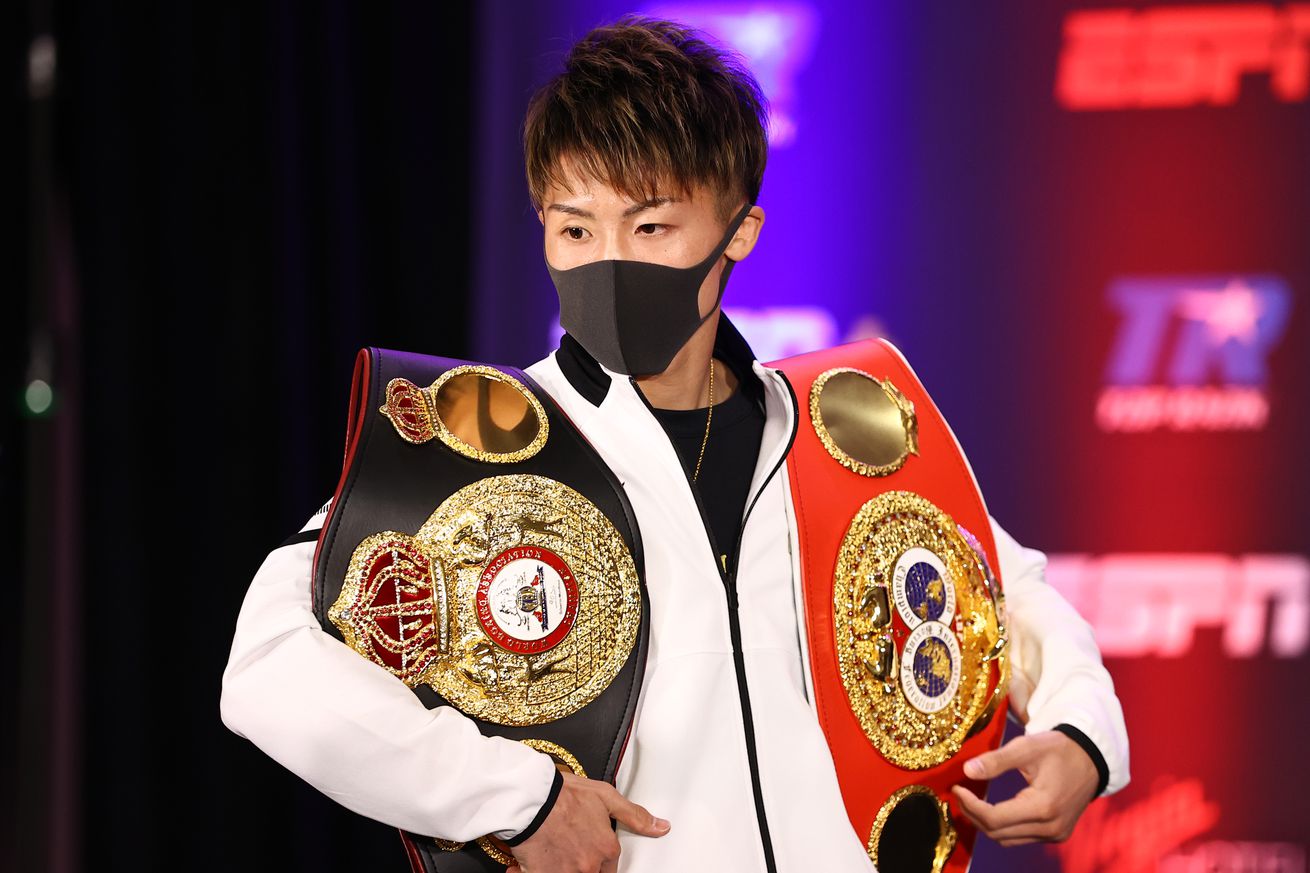 There s so much boxing on June 19th and that s not factoring in the Teofimo Lopez PPV was postponed! Boxing has four notable events on this weekend, with fights ranging from pound for pound talent defending their titles to an MMA legend fighting the underwhelming son of a boxing legend. So without further ado, let s take a look at the boxing main events and title fights of Saturday.

Bantamweight king Naoya Inoue 20-0, 17 KOs defends his WBA and IBF belts against the Philippines Michael Dasmarinas 30-2-1, 20 KOs . Inoue should need no introduction with boxing fans, he has been a champion from light flyweight to bantamweight and won the World Boxing Super Series at bantamweight in 2019. He is Japan s biggest boxing star and the lighter divisions most famous knockout artist. In the other corner, most have probably never heard of Dasmarinas, who will be making his US debut on Saturday.

Dasmarinas won the WBC youth title in 2015 and is signature win is probably his highlight reel KO of French veteran and former European champion Karim Guerfi in 2018. He is a southpaw with solid power and an overall pretty decent fighter. Unfortunately for him he s fighting one of the top three fighters in the world and tends to let his opponents come to him and leave them space. And if you let Inoue have space, you get hurt. Nonito Donaire, who fought the best fight anyone has ever fought against Inoue, stopped pressuring him three times in their fight and got seriously hurt or dropped each time. Fighters who let Inoue fight off the front foot, most notably the very good Emmanuel Rodriguez, usually lasted under four rounds against Inoue, and I don t see Dasmarinas being any different.

In the co-main event of that card WBO super-featherweight champion Mikaela Mayer 14-0, 5 KOs faces former two-division champion Erica Anabella Farias 26-4, 10 KOs . Mayer was a world bronze medalist and a 2016 Plympian as an amateur and picked up the WBO belt in a rout of reigning champion Ewa Brodnicka. Farias was the WBC lightweight champion from 2010 to 2014 and the superlightweight champion from 2014 to 2018 and made a combined 13 title defenses of her titles. She has only lost to some of the very best, Cecilia Braekhus at welterweight and Delfyne Persoon and Jessica McCaskill at lightweight and super lightweight respectively. She is now coming back down to 130, a weight she hasn t made since her seventh fight back in 2009 for the chance to become a three weight champion. Depite Farias coming from higher weights, she will be at a significant size and athelticism disadvantage, giving up five inches to Mayer.

Farias is a solid, well rounded technician but so is Mayer and if anything, this fight looks to me like the perfect example of the passing of the torch currently happening between the previous generation of women fighters and the much better athletes that are coming up through the amateur ranks now that women s boxing has become an Olympic sport. I expect Mayer to win a wide decision and in the medium term, to become a potential opponent for lightweight unified champion Katie Taylor.

Over in Texas, Jermall Charlo 31-0, 22 KOs defends his WBC middleweight title against Mexico s Juan Macias Montiel 22-4-2, 22 KOs . Jermall Charlo moved up from super welterweight four years ago picked up the first marquee win of his middleweight reign with a decision over Sergiy Derevyanchenko in September of last year. His opponent this time isn t of the caliber of the Ukrainian amateur standout and this is very much a stay busy defense. With 22 knockouts in as many wins, Montiel clearly packs a punch but is janky and defensively very limited. He was destroyed and bruatally knocked out on the inside by Jaime Munguia and outboxed for vast stretches of a draw with Hugo Centeno Jr whom Charlo finished in under two rounds . His most recognizable win is his one round destruction of the way over the hill James Kirkland in his last fight.

Charlo is a better athlete, much better at range, doesn t tend to let people work on the inside against him and should have no problem countering Montiel. This should be a fairly straightforward defense in which he showcases his skills and finishes Montiel without much trouble.

On a third card in El Paso, former WBO super welterweight champion Jaime Munguia 36-0, 29 KOs continues his middleweight journey against Kamil Szeremeta 21-1, 5 KOs . Munguia is very fun to watch but at 24 is still very raw and was very protected during his super welterweight run. He should probably be looked at more like a prospect still than a former champion. Szeremeta is a competent if nothing special fighter and should be a good test for the young Mexican. He held the European title and most will remember him for getting sent down 4 times in seven rounds by Gennady Golovkin last year. He is decent at distance with an ok jab but lacks any outstanding attributes that would allow him to break through at the top level. Munguia is a powerful pressure fighter but has shown some limitations agianst boxers which Szeremeta might be able to exploit. However his lack of power makes me sceptical about his chances to keep Munguia off of him enough to prevail.

And rounding out our tour of the boxing events airing in the US on Saturday, we have a novelty fight between Anderson Silva 1-1, 1 KO boxing, 34-11 MMA and Julio Cesar Chavez Jr 52-5-1, 34 KOs in an eight-rounder on a Tribute to the Kings PPV. Silva is obviously way past his prime and hasn t boxed in over 15 years and despite Chavez being a notoriously unmotivated boxer who made a career off of his father s name, there shouldn t be any doubt about the result. Chavez, for all the favoritism he s benefitted from in his career, was still a pro level fighter and losing to Silva at this stage of his career would be a new low. The best case scenario for the public would probably be if they treated this like a fun sparring session. Anderson s late career has been depressing enough to follow as it is.