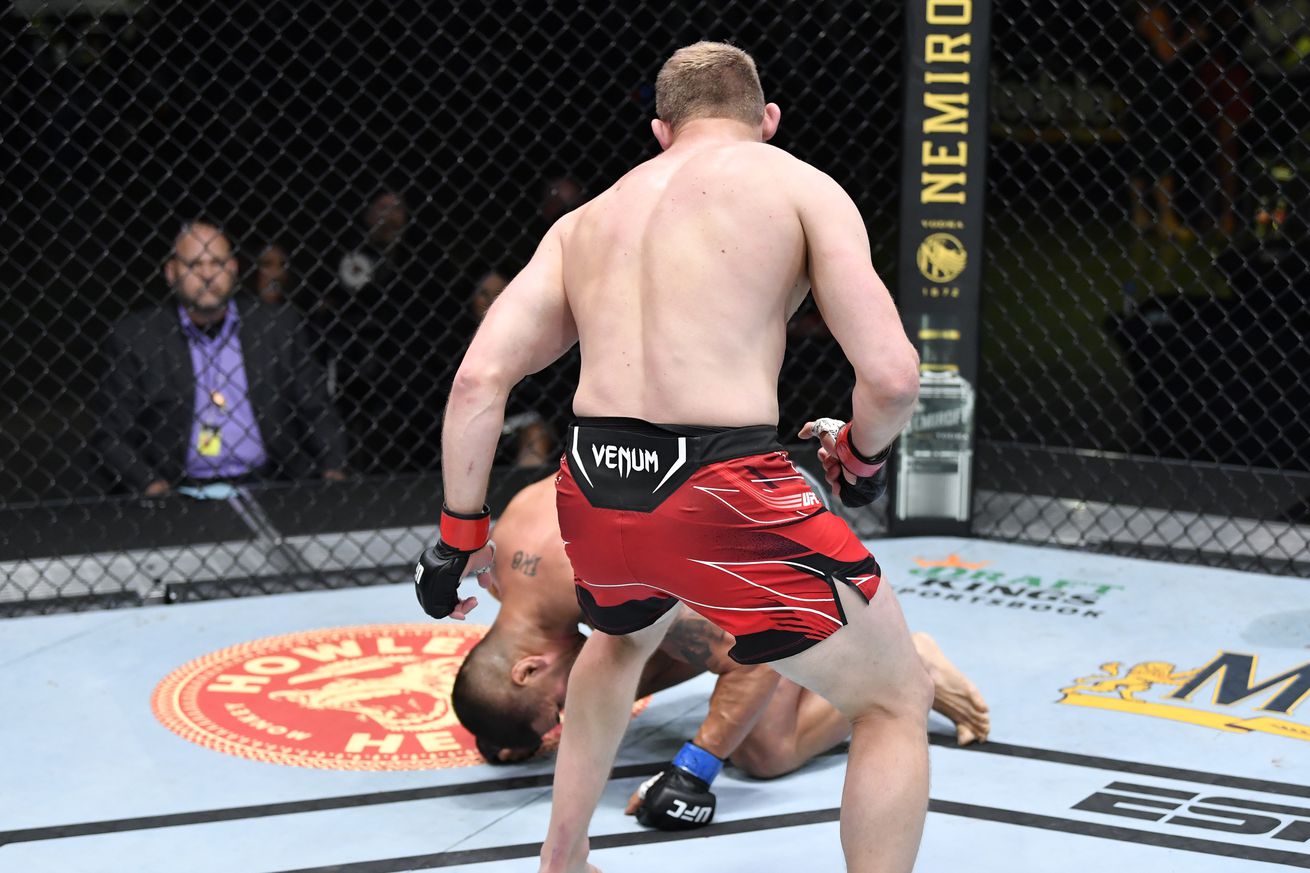 Get the Full StoryMarcin Prachnio of Poland drops Ike Villanueva with a body kick in a light heavyweight fight during the UFC Fight Night event at UFC APEX on June 26, 2021 in Las Vegas, Nevada. Photo by Chris Unger Zuffa LLC

Check out the results and highlights from the UFC Vegas 30: Gane vs. Volkov preliminary card. The UFC Vegas 30 preliminary card is in the books and it was action packed as expected. Damir Hadzovic not only held off a furious comeback from Yancy Medeiros, but Denmark also beat Wales at Euro 2020 so it s like a double win for him. Charles Rosa survived a late comeback bid from Justin Jaynes to take a decision, Julia Avila got an emotional last-minute finish of Julija Stoliarenko, Marcin Prachnio and Jeremiah Wells scored violent knockouts of their respective opponents, Shavkhat Rakhmonov put the 170 lbs division on notice with his dominant stoppage of Michel Prazeres, and Kennedy Nzechukwu rallied for a third-round standing TKO of Danilo Marques.

Here s how the fights played out.

Marques took Nzechukwu down almost immediately and backpacked him with the body triangle when Kennedy got back up. This wasn t surprising given the grappling advantage for the Brazilian but that was exceptionally quick. Marques threw some punches and hunted the standing rear-naked choke. He also got admonished for grabbing the top of the cage, which is an obvious no-no. Essentially 4:30 or thereabouts of back control.

It took a little longer than the first round, but Nzechukwu found himself in Marques world again and taken down with a body triangle. Kennedy was on his back at first but then another standing body triangle was in place for a short period of time, then Nzechukwu escaped and let his hands go. Marques looked to be slowing down as Kennedy scored with hard shots before Marques desperately closed the distance for another takedown. This time Kennedy defended and hurt Marques before the round ended.

Ferocious combination punching by Nzechukwu on a gassed Marques had him in retreat mode. Jason Herzog made the call to stop it while standing after multiple warnings to fight back. Marques never did fight back and Nzechukwu pulls off the comeback.

He does it again!Kennedy Nzechukwu weathered the early storm for a late finish at #UFCVegas30 pic.twitter.com f4mxDVk5a2 ESPN MMA espnmma June 26, 2021

Shavkhat Rakhmonov def. Michel Prazeres by submission rear-naked choke at 2:10 of round 2 - Welterweights

Rakhmonov made the most of his comical size advantage against the 40-year-old Prazeres, scoring a trip takedown two minutes into round one. After minimal ground-and-pound, Rakhmonov momentarily attacked with a guillotine but Prazeres got back up and had to deal with the grinding clinching and body lock. Prazeres own attempt to take it to the mat didn t go well as Rakhmonov kept the whizzer. All things considered, a tame opening frame.

A spinning kick glanced off of Prazeres and seemed to hurt him. The Kazakh fighter followed that up with a knee, and then on the ground a series of right hands flush on Prazeres s face. Rakhmonov eventually got to the back and kept his 100 finishing record intact by getting the rear-naked choke.

Jeremiah Wells def. Warlley Alves by KO punches at :30 of round 2 - Welterweights

Wells took advantage of an Alves slip and had Warlley on his back in the first handful of seconds. He teed off on Alves with punches and elbows from half guard before standing up. There s no doubt that even on short notice Wells showed no signs of Octagon jitters and he was throwing with bad intentions. Alves jumped guard for a guillotine choke after making Wells miss frequently with those home run shots, but didn t get the choke.

A big right hand by Wells as Alves turned his back put the Brazilian down. The follow-up shots on the ground sent Warlley into unconsciousness. That was a spectacular way to win a UFC debut.

Villanueva hurt Prachnio with an uppercut inside of 30 seconds and had the Polish fighter covering up. Prachnio weathered the storm and things settled down a bit, although Prachnio s left eye was in bad shape. Marcin landed his fair share of heavy leg kicks, whereas Villanueva was head hunting. Prachnio had a foothold on the rest of round one before a caught kick led to Villanueva firingo ff several right hands to end a back-and-forth opening five minutes.

If Villanueva started round one tremendously, round two was both a nightmare and the end of his day. A VICIOUS liver kick by Prachnio had Villanueva done and dusted. They don t get much more brutal than that.

Total rock em sock em in the first couple of minutes. Avila rocked Stoliarenko with a right hand and then suddenly all hell broke loose with the two of them wailing on each other. Two front kicks to the face by Avila stunned Stoliarenko again yet she remained upright but with a bloodied nose. The pace slowed from there but needless to say things escalated quickly before deescalating.

Avila got jarred by a couple of right hands and that turned her aggression up a tick, but not much if anything landed cleanly to kick off round two. Stoliarenko took Avila down and Julia tried to attack with an armbar Stoliarenko s specialty . Back came Julija with a leglock which he couldn t maintain but she whacked Avila with two right hands on their way back up. As Stoliarenko sought to put the fight back to the ground, Avila stood up and fired off powerful leg kicks. Stoliarenko s face was a bloody mess as a result of all of the punishment Avvila dished out throughout this round and the preceding one.

Stoliarenko was backed up after a stiff straight right by Avila, and an immediate clinch ensued. Avila secured the takedown on the Lithuanian and had maintained top position for a good while but lost the position for a brief moment in a scramble. Avila was able to to take the back and then get into mount. Stoliarenko s toes were in the cage so the fight paused for a short period of time, but he restarted them in the same position. Avila rode out the rest of the fight in back mount until she got the fight-ending rear-naked choke. Don t mess with a Raging Panda.

Jaynes bet his entire fight purse on himself and it proved an ill-fated famble. Rosa was jarred by a left hook and a right uppercut in what was an inauspicious start for the Massachusetts native. The boxing advantage looked pretty comfortably in Jaynes favor. Rosa turned up the aggression and connected on some powerful low kicks. He loaded up on his own power shots with varying success and then took Jaynes to his world with an easy takedown, then mount and back mount before Jaynes escaped. A strong close to the round for Rosa.

Jaynes shot for a takedown in the opening minute of round two and Rosa countered with a guillotine. Justin was fine but he eventually lost top position and Rosa got back to his feet. Rosa used a front headlock sprawl to stop another takedown, and with Jaynes right arm trapped it allowed Rosa to land a few ground strikes to the head. The ground-and-pound bloodied Jaynes, who finally exploded to top position but into a triangle choke. Time expired before it could seriously threaten.

Unsurprisingly, Rosa shot for a takedown to start round three and advanced straight into side control. Rosa sought the north-south choke but did not complete it and Jaynes returned to his feet. Jaynes cracked Rosa with a massive left hook and had him badly rocked. Suddenly the fight had turned dramatically and Rosa was eating several massive head shots... and then Jaynes for no particularly good reason went for a takedown. Jaynes tried to lock up the arm triangle but did not get the submission, and ended the fight on the bottom and taking ground-and-pound. A crazy ending and in the end Jaynes gamble did not pay off.

Both men kept a good pace and landed quality low kicks and power punches on each other in the early proceedings. Medeiros in particular was having success with his jab, making the most of his reach advantage. A flurry by Hadzovic starting off with a knee had Medeiros backing up and taking some shots. Hadzovic then tripped Medeiros and briefly took the back before Yancy escaped. The Bosnian-Dane had a strong end to the opening frame and was the far more damaging fighter.

Hadzovic basically unleashed hell on Earth on Mediros early in round two and did everything but hurt him enough to drop him. Just an onslaught of clean head shots against the fence. While he didn t get at least a knockdown, Hadzovic did open up a nasty cut on the left side of Yancy s face. A big right hand by Hadzovic started another punching assault as Yancy retreated, defended well enough, and absorbed whatever did land. Hadzovic was noticeably tiring but Medeiros offense was too few and far between.

Round 3 started as more of the same Hadzovic plastering Medeiros with power shots to the head. The referee threatened to stop the fight if Medeiros didn t improve things. Soon enough the Hawaiian got a takedown and took the back, searching for a rear-naked choke. Hadzovic escaped the choke but he was take down again while noticeably exhausted. Medeiros had full mount briefly and continued to search for the finish he absolutely needed to pull off the stunning comeback. In the dying seconds he had Hadzovic s back and the rear-naked choke with a body triangle but ran out of time. Medeiros won the round but lost the fight, but once again showed his toughness.