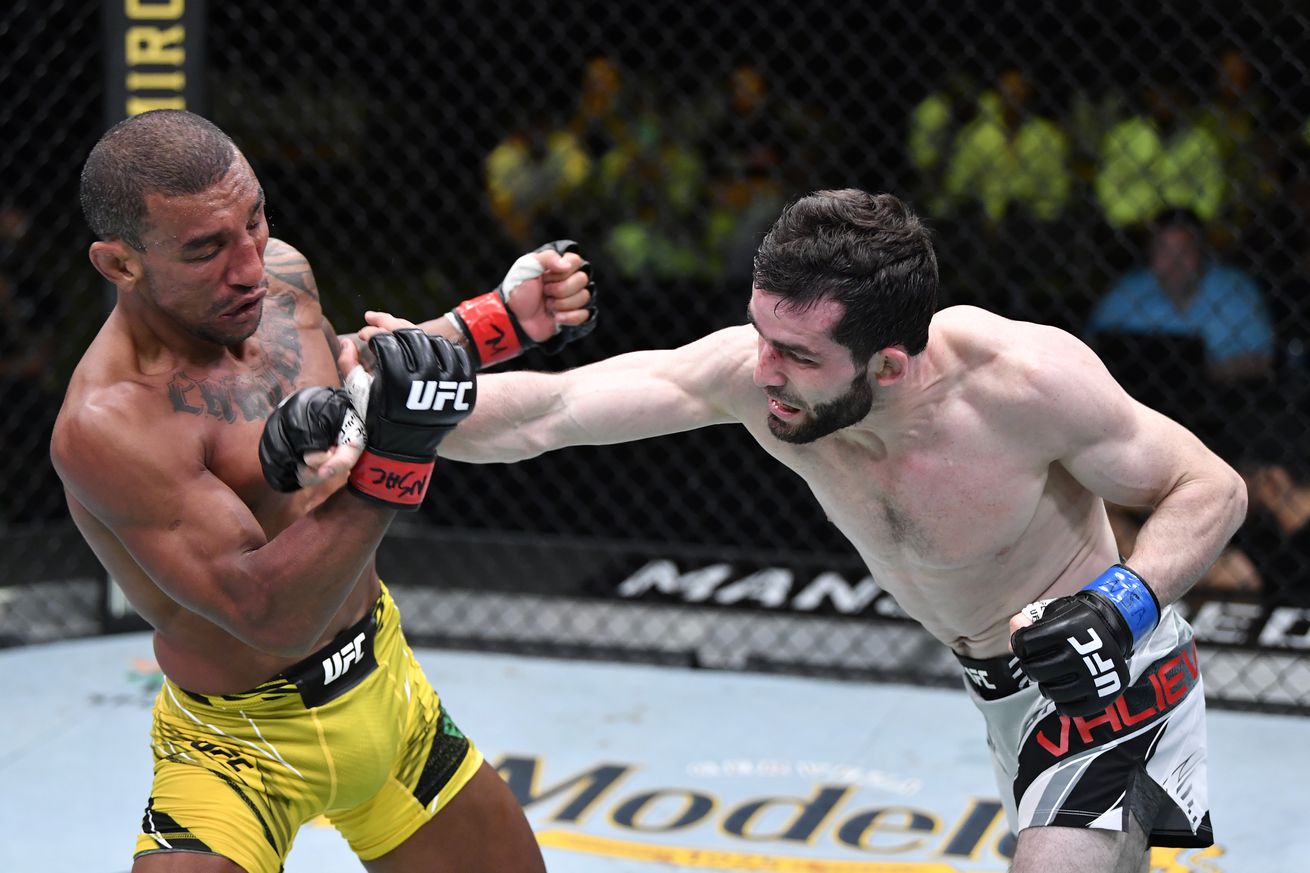 Get the Full StoryTimur Valiev of Russia punches Raoni Barcelos of Brazil in a bantamweight fight during the UFC Fight Night event at UFC APEX on June 26, 2021 in Las Vegas, Nevada. Photo by Chris Unger Zuffa LLC

Check out the results and highlights from the UFC Vegas 30 main card. The UFC Vegas 30 main card followed in the footsteps of the excitingly violent preliminary card. Renato Moicano put on a superb grappling display in his one-sided victory over Jai Herbert, Tim Means edged out Nicolas Dalby in a grueling scrap, Andre Fili pummeled Daniel Pineda but unfortunately his eye poke resulted in a no contest, Timur Valiev won a three-round way with Raoni Barcelos, and Tanner Boser put away Ovince Saint Preux to end his two-fight losing streak.

Here s how the fights played out.

Tanner Boser def. Ovince Saint Preux by KO strikes at 2:31 of round 2- Heavyweights

Boser started brightly with a bevy of leg kicks and a walloping overhand right. Saint Preux was content to bide his time and uh... just not throw. Not an ideal way to win fights. Boser basically just threw kicks and single punches at range for an entire round and OSP alternated between dodging and absorbing these strikes.

As Boser kept the striking success going, OSP got the takedown he badly needed and into side control. With the aid of what initially looked like a fence grab, Boser got himself to a knee and eventually back up. After Boser returned to his feet, a knee and a big right hand by Boser hurt and dropped Saint Preux. Another left hand ended proceedings. The replay suggested that it was an optical illusion and that there wasn t a fence grab.

It was a tame start to this highly anticipated contest. Lots of feinting and waiting on the other one to open up, but then the fists started flying from Barcelos and both men whacked each other with kicks. Certainly Valiev was the more active fighter and he landed more.

There was a lot more aggressiong to start round two, with Barcelos on the front foot and looking for power punches whereas Valiev was looking for the same thing but varying up his strike selection better than the Brazilian. Valiev also had the decided advantage in both speed and countering. A short left hook caught Valiev s attention and proved to be a turning point. Another short left dropped Valiev and hurt him badly. After a few ground shots, Valiev returned to his feet and then got assaulted with an uppercut from the deepest depths of hell and he was down again. Somehow, someway, Valiev survived the round.

At least based on the way the first minute of round three went, it appeared as if Valiev cleared the cobwebs after those two knockdowns. The striking was fairly even if not a slight edge towards the Russian with the minutes counting down. Barcelos did well to stop two takedowns but he got clipped with a spinning backfist. Raoni connected on some sharp punches late but Valiev was simply more active and more accurate, as was the case in Round 1. Barcelos undefeated UFC run is over, whereas Valiev has now won two straight after a disastrous debut.

Andre Fili vs. Daniel Pineda ends in no contest due to eye poke at :46 of round 2 - Featherweights

As expected, Pineda came out throwing haymakers and seeking an early KO. That almost had an immediate backfire when a right hand by Fili sent him stumbling. Fili was unable to capitalize and get the knockout, but it was a hell of a start. Pineda sought to crush Fili s lead leg with kicks and while he landed, Pineda got split open with a high kick and he was hurt. Fili then lateral dropped him but didn t keep him down .The damage on that lead leg from the kicks did prompt a stance switch from Fili. A monstrous body kick put Pineda down and he was extraordinarily tough to survive that shot. Can you believe this was all in round one?

Fili again cracked Pineda with a body kick but he also poked him in the eye, prompting a pause. Sadly, Pineda s eye was already messed up from the previous round s damage and the eye poke pretty much rendered him unable to see. Fight over and a no contest.

HOW DID HE JUST EAT THOSE?! #UFCVegas30 pic.twitter.com AEBqct3wEr ESPN MMA espnmma June 26, 2021

Unfortunately due to an eye poke in the second round, Andre Fili vs. Daniel Pineda ends in a no contest.#UFCVegas30 pic.twitter.com ZeHzBSj0lp UFC on BT Sport btsportufc June 26, 2021

Means came out aggressively and looked to do damage in the clinch, but Dalby returned fire with punches in close quarters. It was Means who took Dalby to the mat perhaps rather surprisingly with a lateral drop and later into side control. Means landed a few shots before Dalby got to his knees and eventually to his feet, where Means drilled him with a knee to the body. A 1-2 sat Dalby late in the round, which was pretty handily won by the Dirty Bird.

The Danish fighter charged at Means and tried to go on the offensive but got chopped down on a couple of occasions by Means body punches. Dalby answered with body kicks, but Dalby was clearly more affected whenever he got hit compared to Means. While Dalby got the chance to inflict punishment on Means in spurts, it was Tim who was the more consistent minute to minute fighter. A leg kick put Dalby off balance and that led to Means putting Nicolas on his back.

Having largely been dominated through two rounds, Dalby rocked Means with a straight right that forced Tim to clinch up in a moment of desperation and time consumption. It allowed Means to recover and put Dalby against the fence. Things slowed to a crawl as a result of the clinchwork with minimal offense, which was bad news for Dalby. He never seized the opportunity after Means was hurt and Tim gets his third straight win.

Renato Moicano def. Jai Herbert by submission rear-naked choke at 4:34 of round 2 - Lightweights

Moicano wasted no time in getting a body lock takedown and into side control. Herbert s efforts to scramble to a better spot turned into full mount for Renato. Herbert did well to his use his legs to create space and get back to his feet. Afterwards Herbert drilled Moicano with a hard right hand. The power and speed of Herbert on the feet was noticeable but another takedown into mount stemmed the tide of offense.

Renato was relentless with his pursuit of the takedowns and his grappling, and Herbert did not have many answers for it. Another easy pass to mount early in round two and this time he got in some solid ground-and-pound with the right hand. Jai got to his feet only for another takedown and back mount. Moicano went to full mount again and kept the grappling superiority up. Serious ground strikes by Moicano had Herbert badly hurt and he used that to set up the rear-naked choke finish. He could ve had his first knockout win of his career but he went with his bread and butter.