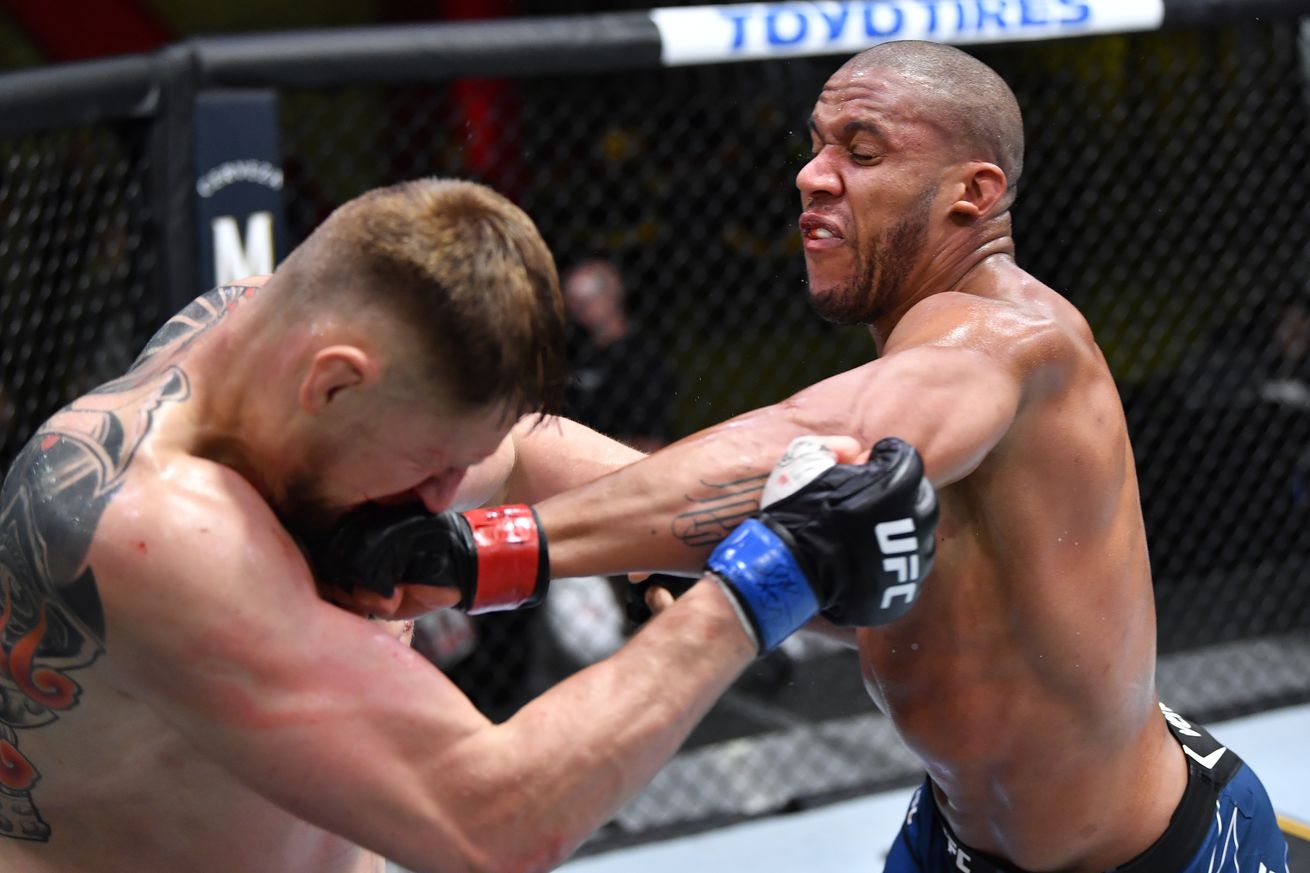 Get the Full StoryCiryl Gane of France punches Alexander Volkov of Russia in a heavyweight fight during the UFC Fight Night event at UFC APEX on June 26, 2021 in Las Vegas, Nevada. Photo by Chris Unger Zuffa LLC

French heavyweight contender Ciryl Gane got the better of Russia s Alexander Volkov in what was a glorified kickboxing match at UFC Vegas 30. Ciryl Gane kept his undefeated record intact in the UFC Vegas 30 main event.

The French striker picked up a unanimous decision win over Alexander Volkov to further his case for a title shot. While the scorecards had a pair of shutouts and a 49-46, it was not an unbelievably lopsided beating. Gane did out throw and out land the former Bellator champion and as the fight progressed he was more aggressive and willing to take chances. Volkov drops to 7-3 in his UFC career whereas Gane is now 9-0 and coming off consecutive main event victories over fellow contenders Volkov and Jairzinho Rozenstruik.

Two outstanding kickers went at each others legs in the opening 10 seconds. Gane looked to set up his strikes behind his southpaw jab, whereas Volkov continued to establish his presence with leg and body kicks. Ciryl landed a nice crescent kick on the Russian, and past the midway point of the first round he shot for the first takedown. Volkov defended well and Gane didn t pursue anything more in the clinch. As you might have expected, it was a technical, high-level striking match over the opening five minutes.

Round two was more of the same with a somewhat modest pace being put together but neither fighter landing a telling shot to hurt the other. Gane had the more effective boxing, Volkov busier with his kicks, but there was a lot of take one, give one to this fight. Gane scored with a knee to the body, with Volkov responding with a left and right upstairs. Volkov continued his leg kick success as once again there was little to separate the two in the scoring.

For the most part, Gane was leading the dance and making Volkov work off the counter. It was apparent that he had the speed advantage and it might have had an impact on Volkov s gameplan. Gane was the main aggressor and he was connecting when Volkov was against the fence. The Frenchman found a home for his right hook to the body and Volkov was struggling to get his offense going in the 3rd. A hard uppercut further bloodied Volkov s nose as Gane charged forward. Undoubtedly the third was the best and most clear-cut round in his favor.

Gane continued to open up on a discouraged Volkov, throwing flying knees and spinning backfists and taking more chances while still landing that jab. Volkov caught Gane with a right uppercut and had a little rhythm going a couple of minutes into round four, and Gane aimed to change that with a single leg takedown. Volkov stopped it easily and they returned to striking. There was more willingness from Volkov to let his hands go and while Gane might have closed the fourth better, it was Volkov s best round since the opener.

The final round began with Gane drilling Volkov with a jab once again. He caught him with an uppercut on the inside and avoided a Volkov left hook in close quarters. Volkov stung Gane with a couple of jabs but his workrate was not where it really needed to be given the urgency to win the 5th. A big body kick by Gane was blocked by Volkov but it appeared to hurt his right arm just on the impact. Gane committed a horrible eye poke in the final minute of the fight and Volkov reacted accordingly. Ciryl had been warned before by Herb Dean about the eye pokes, but he did not lose a point. The fight resumed and nothing really of note happened after that.