Editorial: How the f did we get here? 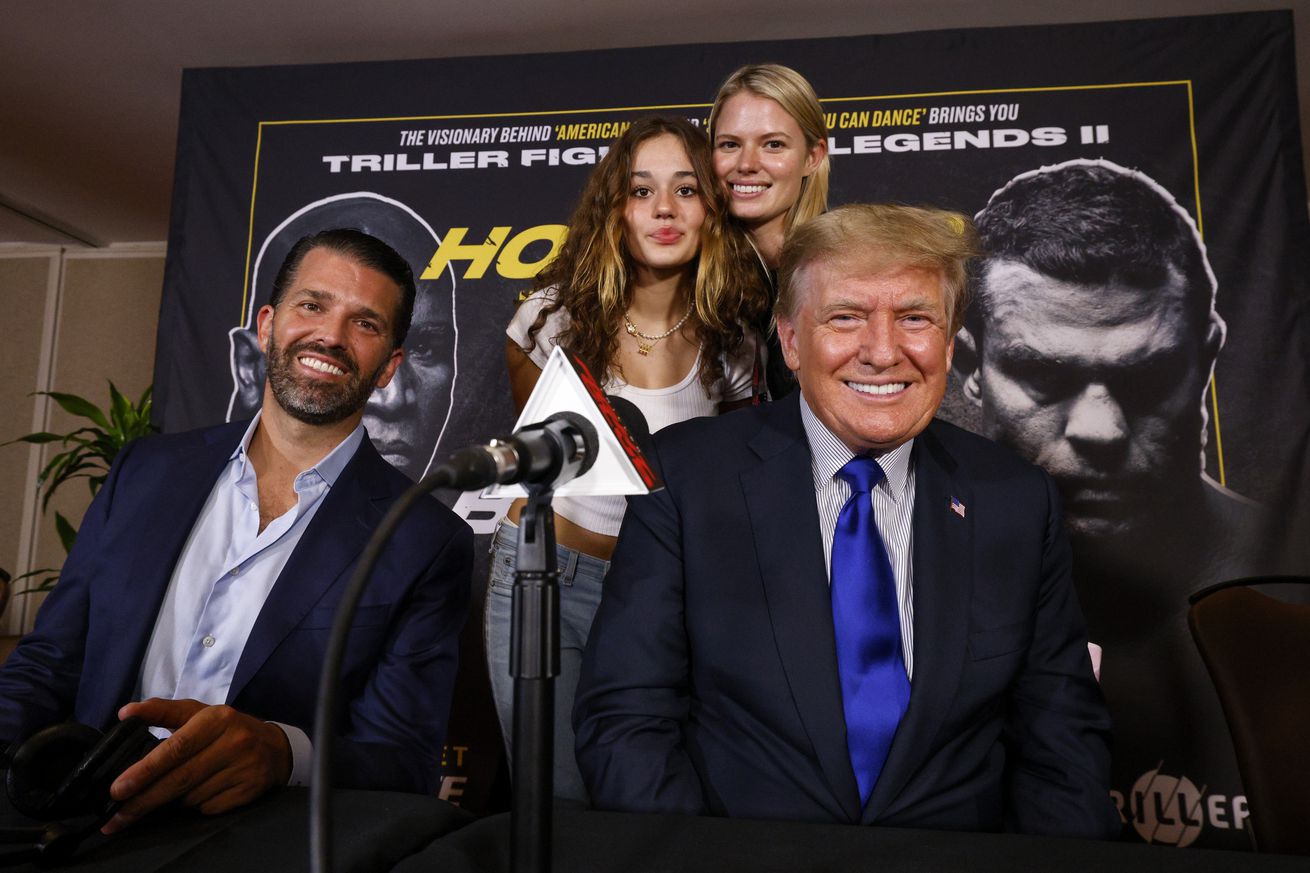 The Triller Fight Club hellscape was both absurd and entirely reflective of the state of combat sports. It was during the moment of silence honoring the victims of the September 11 terrorist attacks that a drunk woman began yelling obscenities at the crowd in attendance at Saturday s Triller Fight Club event.

This isn t fucking Venezuela, the woman, who donned a bandana emblazoned with the American flag, yelled as she was being escorted out of the building.

Go fuck yourself, someone in the crowd fired back.

As the commotion took place ringside, the pay-per-view broadcast maintained focus on former President Donald Trump, who was seated in a booth overlooking the arena as one of the featured commentators. Dressed in a black suit with a blue tie, the former president watched as 9-year-old D Corey Johnson delivered a stunning rendition of the national anthem prior to the evening s main event. As Johnson exited the ring, the raucous crowd performed their own chorus of We love Trump, much to the former president s delight.

What a great evening, Trump told the crowd on the night marking the 20th anniversary of the 9 11 attacks. I think you re going to see an incredible fight.

Even by Trump s standards, that statement could not have been further from the truth.

The main event pitted two fighters with a combined age of 102: boxing great Evander Holyfield, months shy of his 59th birthday, and 44-year-old former UFC champion Vitor Belfort. It was a one-sided beating that saw Belfort drop Holyfield, who was ten years removed from his last pro fight, before the referee stepped in to stop the bout at just 1:49 in the opening round. By all accounts, it was a necessary stoppage that potentially saved Holyfield from life-altering damage. But why was Holyfield there in the first place? How had a commission sanctioned a fight between a fighter close to pension age against a competitor 14 years his junior? And why was the former president of the United States calling the action?

What I mean to say is: How the hell did we get here?

Well, for starters, Holyfield wasn t even supposed to be the one fighting on Saturday. That role belonged to Oscar De La Hoya who retired in 2009 before he was hospitalized after testing positive for the coronavirus. With less than two weeks notice, Triller brought in Holyfield to replace De La Hoya but were unable to get the fight sanctioned in California for obvious reasons . So instead of finding another fighter, preferably one who still a competitive athlete, Triller moved the entire fight card across the country to Florida, where an incompetent athletic commission had no qualms about allowing a 58-year-old to step into the ring.

Triller added fuel to the fire when the organization announced on Tuesday that Trump and his son, Donald Trump Jr., would be providing commentary for the event in a special gamecast. The next day, renowned boxing commentator Jim Lampley, whom Triller had secured to call the fights, pulled out in objection to Trump s involvement in the event. This resulted in a broadcast featuring the former president, his son, former UFC champion Junior dos Santos, and Jorge Masvidal, who campaigned for Trump on numerous occasions during the 2020 presidential election cycle. Trump spent much of the broadcast reminiscing about old boxing fights, his days hosting boxing events in Atlantic City during the 1980s-90s, and his favorite boxers, all while chugging bottles of diet coke.

Trump has always had a flair for the absurd. Apart from his history of hosting UFC and boxing events in his Atlantic City casinos, Trump was also involved in a World Wrestling Entertainment WWE storyline with Vince McMahon in 2007. The storyline culminated in a Battle of the Billionaires showdown between the two at Wrestlemania 23. Trump continues to maintain ties with McMahon and UFC President Dana White, both of whom have publicly and financially supported his presidential campaigns. Vince s wife Linda McMahon even became head of the Small Business Administration during Trump s presidency, which she later left to chair the pro-Trump super PAC America First Action.

And while Trump was relatively tame in comparison to the way he approaches his rallies, and was actually engaged in some of the fights he seemed genuinely surprised when Anderson Silva knocked out Tito Ortiz, whom he called a very smart guy he did manage to sneak in several political jabs at President Biden during the broadcast.

It s like elections: it could be rigged, Trump said when describing the way referees and judges decide boxing matches.

Meanwhile, those who paid 50 to watch the pay-per-view were treated to a live chat filled with adherents of the far-right QAnon conspiracy movement discussing topics such as Hunter Biden, election fraud, and whether John F. Kennedy Jr. was still alive. In other words, a hellscape that was both absurd and entirely reflective of the state of combat sports.

Triller, an entertainment app that views itself as a competitor to TikTok, formed its fight club in response to a growing interest in celebrity boxing and exhibition matches, fueled by the rise of YouTube sensations Jake and Logan Paul. Both have arguably more star power than any active fighter on the UFC roster not named Conor McGregor and even he is far past his prime, both in fighting form and popularity . Much of this is due to the UFC s inability to generate new stars capable of capturing mainstream attention. Outside of McGregor, the only other truly mainstream figure in the UFC is color commentator Joe Rogan, who, much like the Paul brothers, owes his fame from his success on YouTube.

The UFC has proven to be unwilling of generating new stars that capture mainstream attention. Part of the problem is the over-saturation of UFC events, which has led to a noticeable decrease in the quality of the fights showcased under the UFC banner. Many UFC pay-per-views are no longer worth the price of admission, and search and web traffic for UFC fighters has dwindled relative to the Paul brothers. This is no longer the heyday of Brock Lesnar, Ronda Rousey, or McGregor.

Boxing, too, has suffered over the years. While the sport has generated talents such as Gennady Golovkin, Canelo Alvarez, Tyson Fury and Anthony Joshua, none carry the star power of their predecessors such as Floyd Mayweather or Manny Pacquiao did. And yet, even Mayweather could not ignore the allure and easy pay-day of celebrity boxing when he faced Jake Paul in an exhibition bout earlier this year.

As interest in boxing and MMA has waned, an appetite for entertainment based combat sports events reemerged. Triller understood this, which is why it signed Jake Paul to compete against Nate Robinson on the undercard of the Mike Tyson vs. Roy Jones Jr. exhibition match and later had Paul headline their following event against MMA fighter Ben Askren. It is also why every MMA fighter and some boxers, too worth their salt is calling out the Paul brothers in the hope of earning the biggest pay day of their careers.

Case in point: Vitor Belfort. After beating up on the aged Holyfield, Belfort called out the elder Paul brother and announced that Triller was willing to offer a 25 million purse for the winner of a proposed fight between them on Thanksgiving. All of this occurred in an arena peppered with signs that read Trump Won and Trump 2024. It was only natural that Trump would be the one to close out the circus.

This is like a rally, Trump said while waving at the crowd and thanking them for their support. We love our country.

While Trump s involvement in the Triller carnival is a testament to the role that combat sports plays in the zeitgeist of modern American politics, it was by no means the worst part of the event. Indeed, the former president was overshadowed by the aged veterans who tainted their legacies on pay-per-view for our supposed entertainment. And though Ortiz s faceplant KO loss does feel like karmic justice, we are all lucky that the Holyfield fight did not end in tragedy.

Triller may be responsible for the incompetent matchmaking but it is the collective failures of MMA and boxing that are to blame for our current nightmare.