Skip Bayless: I believe in Jon Gruden and Derek Carr, but still have faith in Big Ben and the Steelers I UNDISPUTED 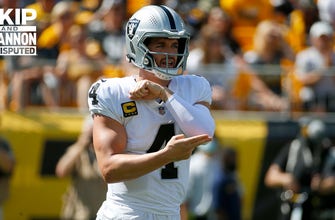 Get the Full StoryThe Las Vegas Raiders raided the Pittsburgh Steelers as they came away with a big 26-17 road win. Derek Carr carved the Steelers up for 382 yards and two touchdowns. After the game, Jon Gruden spoke glowingly of his veteran quarterback, saying quote: 'I ll let his play speak for itself. I've been clamoring about Derek Carr since I got here..Hopefully he gets some recognition for what he did today. Against two great defenses, two weeks in a row, and it's a big reason we re 2-0.' Skip Bayless explains why he still believes in the Steelers despite his faith in Gruden and Carr.