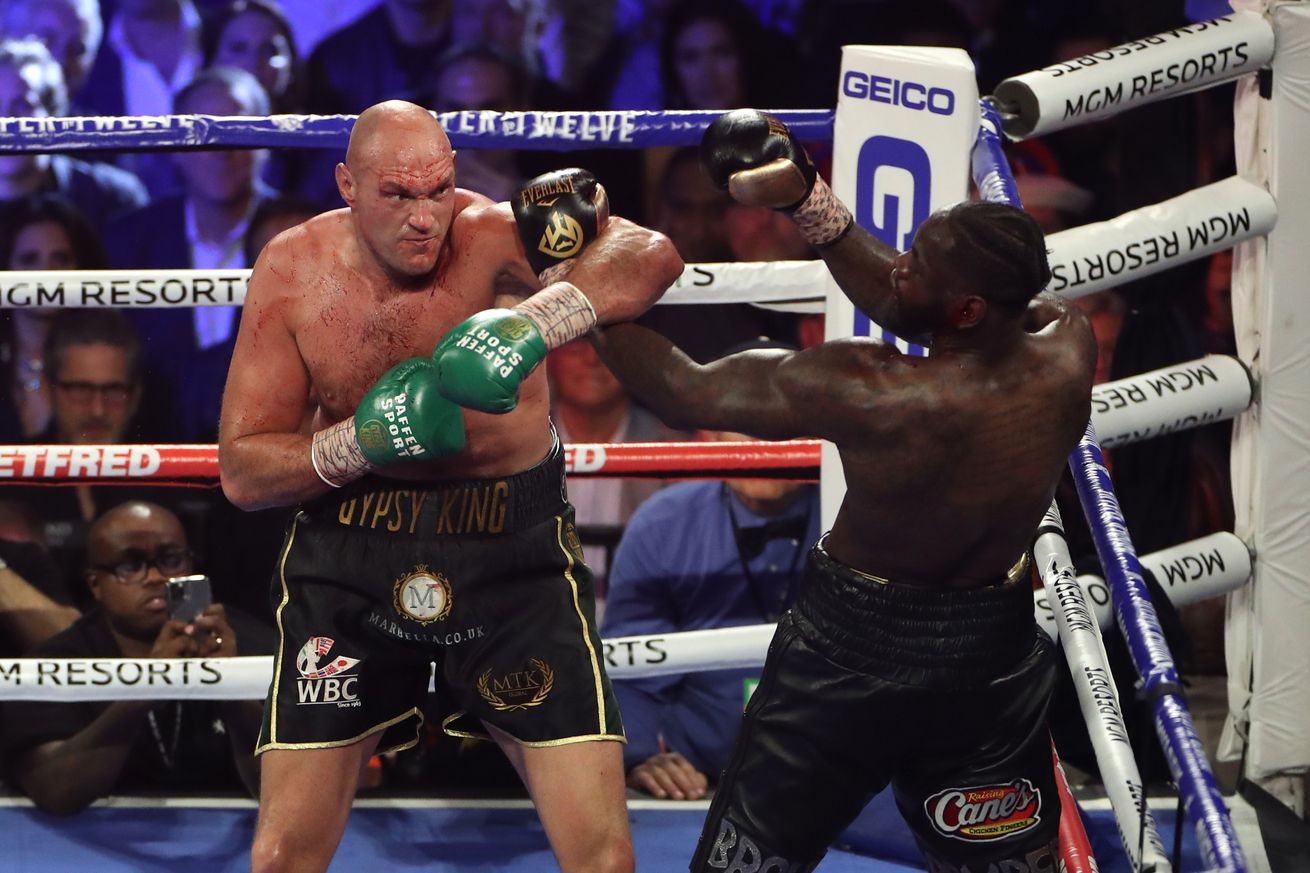 It s a big heavyweight title rematch on an all-heavyweight undercard. Tyson Fury 30-0-1, 21 KOs and Deontay Wilder 42-1-1, 41 KOs are meeting for the third and probably final time on Saturday in Las Vegas and the fight is supported by a surprisingly interesting undercard.

Fury and Wilder first met in December of 2018. In the first fight, Fury soundly outboxed for the vast majority of the fight but suffered a huge knockdown in the final round. Somehow the knockdown was enough excuse to give Wilder a draw. They met again last year and instead of outboxing Wilder on the backfoot, Fury put on some weight and walked him down for a 7th round corner stoppage. Given that Fury dominated Wilder for pretty much all but 10 seconds over 19 rounds, it s no surprise that he s the favorite again. Wilder is still a devastating puncher and that gives him a chance in every fight, but Fury defused his power very well in the rematch by putting him on the backfoot and tiring him in clinches.

Wilder put on some weight for this fight himself which might prove useful but Fury s dominance on the inside in the rematch had more to do with his superior craft than his size advantage in my opinion. Fury should definitely put the Wilder chapter of his career behind him this weekend.

What he ll do next isn t as clear as it previously was, he was supposed to finally fight fellow countryman Anthony Joshua if he hadn t been contractually obliged to give another shot to Wilder. But Joshua s defeat at the hands of Oleksandr Usyk threw a wrench in those plans for the time being. Fury vs Usyk is the fight to make, but that will now have to wait as Joshua is likely to exercise his rematch close and meet Usyk again in 2022.

The co-main event is a great clash of heavyweight prospects between Cuba s Frank Sanchez 18-0, 13 KOs and knockout artist Efe Ajagba 15-0, 12 KOs . Sanchez was a national Cuban champion in the amateurs and has the boxing skill you would expect from someone with that pedigree. Ajagba is much rawer technically but possesses a terrifying right hand. However his defense is really lacking and he fights with little regard for the possibility of his opponent hitting him back. This hasn t been too costly against the opposition he s faced so far outside of a knockdown he suffered against Iago Kiladze back in 2019. But Sanchez has the counterpunching skill and experience to really punish Ajagba for it. It is a good clash of undefeated fighters which should set the winner up as a contender ready for big fights in the future.

Robert Helenius 30-3, 19 KOs is also rematching Adam Kownacki 20-1, 15 KOs on the card. Helenius who was thought to be past his best upset Kownacki last year by KO. The first fight wasn t really anything to write home about until the 4th round, with Kownacki picking up the first three. But he got overaggressive looking to hurt Helenius and got badly countered. He never recovered from the knockdown and Helenius finished him shortly thereafter. I am expecting much less drama in this one and a cautious Kownacki to do what is needed to get the nod, spectacle be damned.

21-year-old Jared Anderson 9-0, 9 KOs , one of the brightest young heavyweights prospect will be opening the PPV. Anderson is a terrific athlete, a solid puncher and has some excellent boxing skills and fight IQ considering his young age. He s shown the ability to fight southpaw and though he s lcearly much less comfortable than in orthodox, it is a nice thing to have up his sleeve. He will be fighting Vladimir Tereshkin 22-0, 12 KOs . Though the Russian has a sexy looking record at first glance, he s only fought four times since 2013 against very bad opposition and is on a current lay off of two years. He shouldn t be too troublesome for Anderson but will give us an idea of how he deals with an opponent he doesn t outsize.

There are some very decent names on the preliminary card as well, most notably two-time Olympic champion Robeisy Ramirez 7-1, 4 KOs . He will be fighting Orlando Gonzalez Ruiz 17-0, 10 KOs in his first 10-rounder. Ramirez stumbled in his pro debut but he has avenged the loss and has been perfect since. Gonzalez is decent if not anything special, he will provide some resistance but doesn t have much in his arsenal to make me believe he can put Ramirez in any real danger.

Former world titlists Rances Barthelemy 28-1-1, 14 KOs and Julian Williams 27-2-1, 16 KOs are in action too in stay busy fights and super-middleweight prospect Edgar Berlanga 17-0, 16 KOs faces Marcelo Esteban Coceres, who had a surprisingly decent performance against Billy Joe Saunders before being stopped in the 11th a couple of years back.