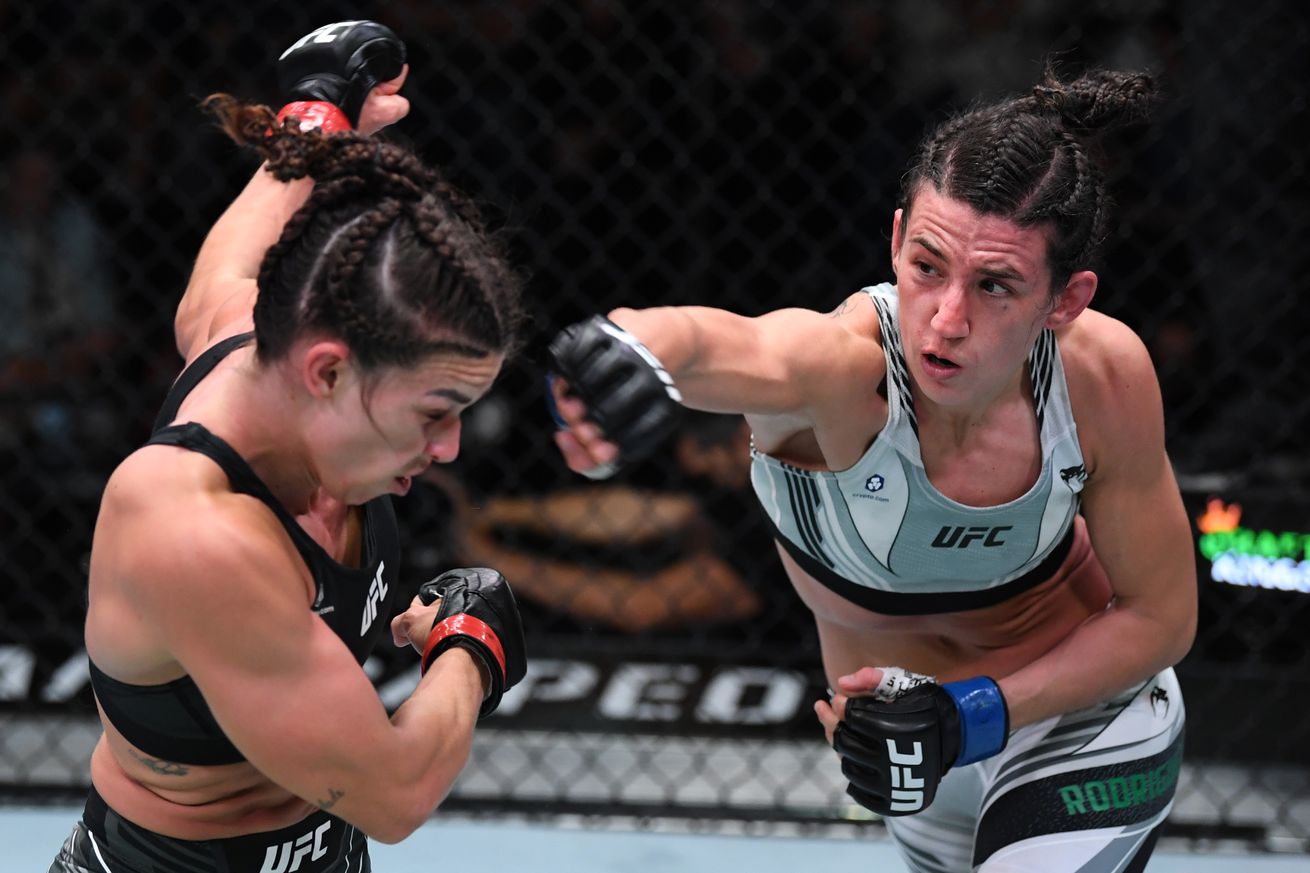 Marina Rodriguez survived bad spots on the ground and outstruck Mackenzie Dern in the UFC Vegas 39 main event. In a striker vs. grappler matchup, the striker prevailed at UFC Vegas 39.

Marina Rodriguez notched herself another win to enhance her case for a strawweight title shot, as she defeated dangerous BJJ submission specialist Mackenzie Dern by unanimous decision. I think it s fair to say everyone knew Dern was the far superior grappler but vastly inferior striker to Rodriguez, so it was all a matter of where the fight would take place. Fortunately for Marina, it was mostly on the feet, but when she was on the mat she was able to avoid getting put in serious submission danger.

With three straight wins and consecutive five-round victories, Marina has established herself as an elite fighter with a serious threat to challenge for the title. As for Dern, it s her second career loss and it s back to the drawing board as far as improving her striking along with finding more effective ways to get the fight to the ground.

In the first round, Rodriguez stopped Dern s most serious takedown attempt and largely outstruck her. You could tell that Dern was looking to pressure Rodriguez with power shots as a means of closing the distance to shoot for a takedown.

Round two saw Dern listen to her corner as far as how to better enter those shots behind her striking, and while she didn t get a takedown off the head-and-arm throw, it doesn t matter when it s Mackenzie Dern. Rodriguez was in survival mode for four minutes, apart from a choke attempt that was not deep enough. Dern did a brilliant job isolating an arm and maintaining position until she eventually got the back with both hooks in. She transitioned to full mount and started raining down ground-and-pound but couldn t quite set up an armbar or any other submission. A truly remarkable job by Rodriguez to avoid an instant submission against a decorated grappler.

The third round was all Rodriguez against a fatiguing Dern, whose striking is nowhere near her grappling, unable to land cleanly while overextending herself and getting countered frequently. Rodriguez was peppering her to the body and looked to be in firm control. It was more of the same in the 4th round as Dern was unable to get the fight to the mat... until she did. One clinch in the final minute saw her throw Rodriguez and then in a scramble she got full mount. She got in ground strikes but didn t have enough time for an armbar in what was otherwise a one-sided Rodriguez round.

Dern really needed the fight back on the mat in the last round but just couldn t do it. Two takedowns were stuffed and her striking was just not going to get it done against someone with vastly superior abilities. Mackenzie did display a great chin as she ate some big overhand rights and hard knees in the clinch and never went down, but Rodriguez was the better fighter on the night and she got her hand raised.

Brown rocked Gooden with a front kick early in the opening round but Jared showed a hell of a chin. Gooden did well to chop away at Brown s legs with a steady diet of low kicks, making the first round closer than Randy seemed to think it was. There was no shortage of trash-talking from both fighters, as Brown continued to struggle with the low kicks and also a right toe injury after the first kick he threw. A right hand stunned Gooden late in the 2nd but Brown couldn t really do anything effective to follow-up and go for the knockout.

Randy really got into a groove and cracked Gooden in the final round with a flying knee... then just brushed off his knee and admired his work, but Gooden was still there. Really for as tough as Gooden was, he was outgunned offensively and Brown got a clear-cut decision.

If Nicolau was fortunate to win against Manel Kape in his last bout, there s no real debate over the scoring of this fight. Elliott s unorthodox striking and odd angles of attack seemed to fluster Nicolau, who was hesitant to let shots go and was also taken down in the opening round. The former title challenger had the early advantage, but the Brazilian adjusted beautifully and ripped Elliott to the body several times over and comfortably took the second frame.

The final round was reasonably close up until Nicolau got a pivotal takedown and extended top control time. He didn t land a lot of offense but some of that is a direct result of Elliott stalling from bottom position, which ultimately meant not a lot of offense from Elliott either. Nicolau gets the deserved nod.

After a stunning loss to Shana Dobson, Agapova obviously learned valuable lessons from that defeat as she picked apart the former LFA women s flyweight champion. Agapova thoroughly outstruck Mazo in the opening round while keeping a fast pace and throwing some heavy punches and kicks. The pace slowed in round two but a more measured Agapova still proved to be the more effective fighter, and in the third round she nailed Mazo with a wicked right hand that dropped her. Agapova latched on the rear-naked choke and Mazo tapped almost literally a second later.

It wasn t exactly a barn-burner through two rounds but Gutierrez seemed to have the edge and was more active in general with his stand-up. Colares was hurt late in the final round and had to deal with an onslaught of strikes before Gutierrez had a late takedown... only to be reversed but time had already expired. Gutierrez s knack for hurting opponents in the closing stages of rounds comes through once again and honestly only Rick Winter knows how Rick Winter scored that fight for Colares.

Alexander Romanov def. Jared Vanderaa by TKO punches at 4:43 of round 2

Loopy Godinez def. Silvana Gomez Juarez by submission armbar at 4:14 of round 1

Steve Garcia def. Charlie Ontiveros by TKO strikes at 1:51 of round 2