Emmanuel Acho: The Eagles should bench Jalen Hurts to properly judge Nick Sirianni as a coach I SPEAK FOR YOURSELF 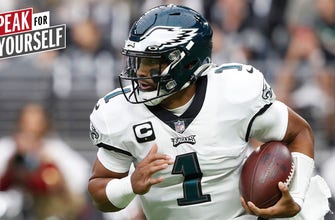 Get the Full StoryThe Philadelphia Eagles have lost five of their last six games after their Week 7 loss against the Las Vegas Raiders. On Monday, the Eagles made some changes to their roster. Joe Flacco was traded to the New York Jets, which puts Gardner Minshew in the backup role. Jalen Hurts has averaged under 200 passing yards in the past three games, but head coach Nick Sirianni still gave him a boat of confidence, saying quote: 'I have a ton of faith in Jalen. He will be our starting quarterback.' Emmanuel Acho explains why the Eagles benching Hurts would clarify 'who's truly at fault for the Eagles' struggles.'