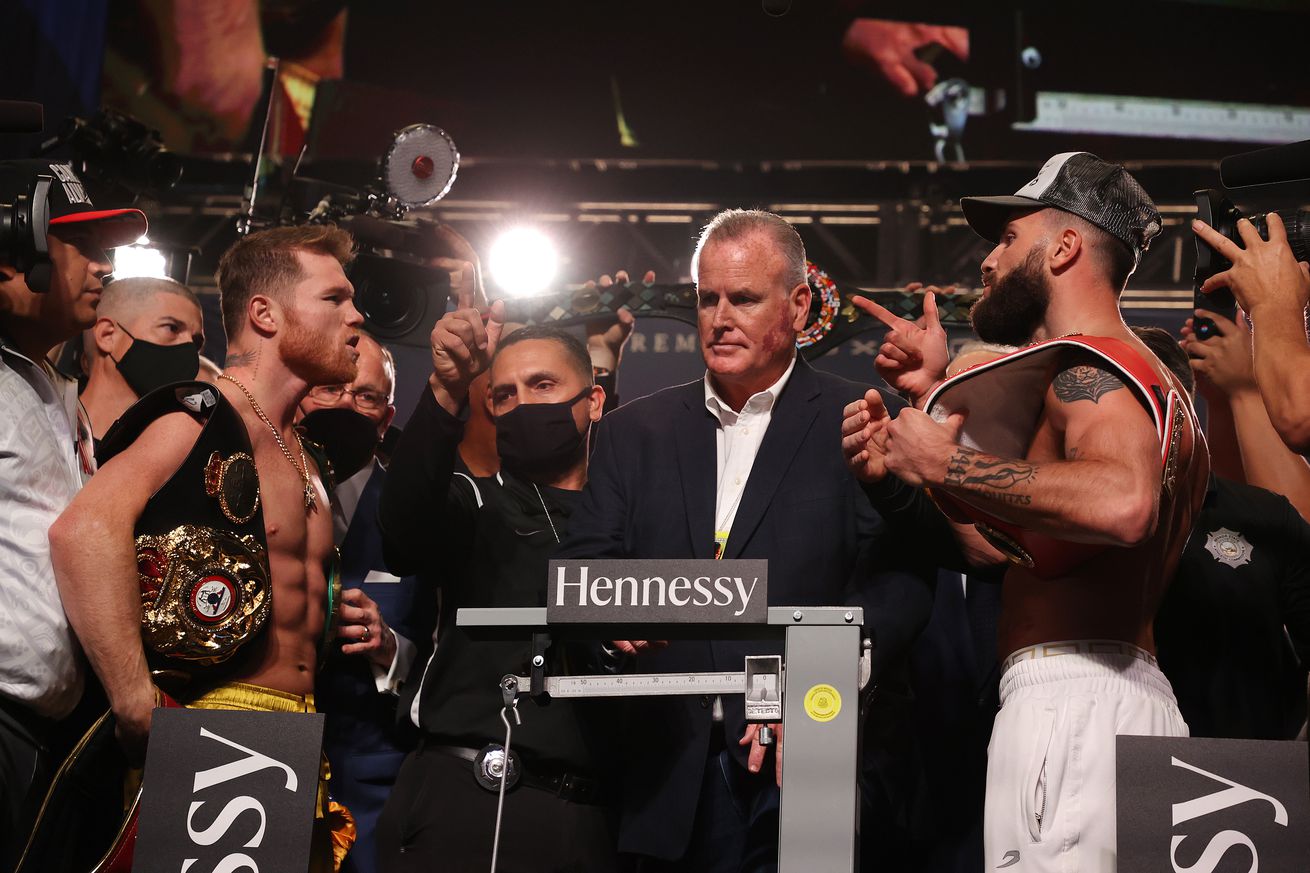 Get the Full StoryCanelo Alvarez and Caleb Plant face off face off during their official weigh-in at MGM Grand Garden Arena on November 5, 2021 in Las Vegas, Nevada. Photo by Al Bello Getty Images

Bloody Elbow has all the details on the Canelo Alvarez vs. Caleb Plant PPV right here, including fight card, fight time, live stream info, results, and more. It s a huge fight night both for both boxing and the UFC!

Yes, there s UFC 268 at Madison Square Garden in New York, but also on Nov. 6 is the undisputed super-middleweight title showdown between WBC, WBO and WBA champion Canelo Alvarez 56-1-2, 38 KOs and IBF champion Caleb Plant 21-0, 12 KOs . The MGM Grand in Las Vegas is expected to be filled to capacity and with a pro-Canelo crowd behind him thanks to a large contingent of Mexican supporters.

Alvarez has been busy over the past 11 months, having won the WBC and WBA titles against Callum Smith last December, then defending those belts against Avni Yildirim in February, followed by a WBO title triumph over Billy Joe Saunders in May. He now looks to complete his run through the 168 lbs weight class by defeating Plant, who s an unbeaten slick boxer out of Nashville trying to shock the world. He s

Here are the basic details on the how you can watch this highly anticipated card, where you can catch a live stream, start time for the main event, and more.

Fight time: The PPV broadcast starts at 9 PM ET 6 PM PT. Expect the main event to start around 11:30 PM ET 8;30 PM PT but this depends on the length of the three undercard fights.

TV Network: The entire PPV broadcast is on Showtime in the United States. The PPV cost is 79.99. BT Sport has the PPV in the United Kingdom at a cost of 19.95.

Odds: According to DraftKings Sportsbook, Canelo is the favorite by a big margin. He can be had at -1000 odds to Plant s 600 underdog line. Those odds are subject to change.

Live stream: You can purchase the PPV on traditional cable satellite services, but there is a streaming option! You can purchase the PPV and watch online through the Showtime App. The Showtime app is supported for streaming on Apple TV 4th Gen , Android TV, FireTV, Roku, Xbox, iOS and Android Mobile. From the British crowd, here s how you can watch BT Sport on a live stream here.

Full broadcast info around the world via Wikipedia :