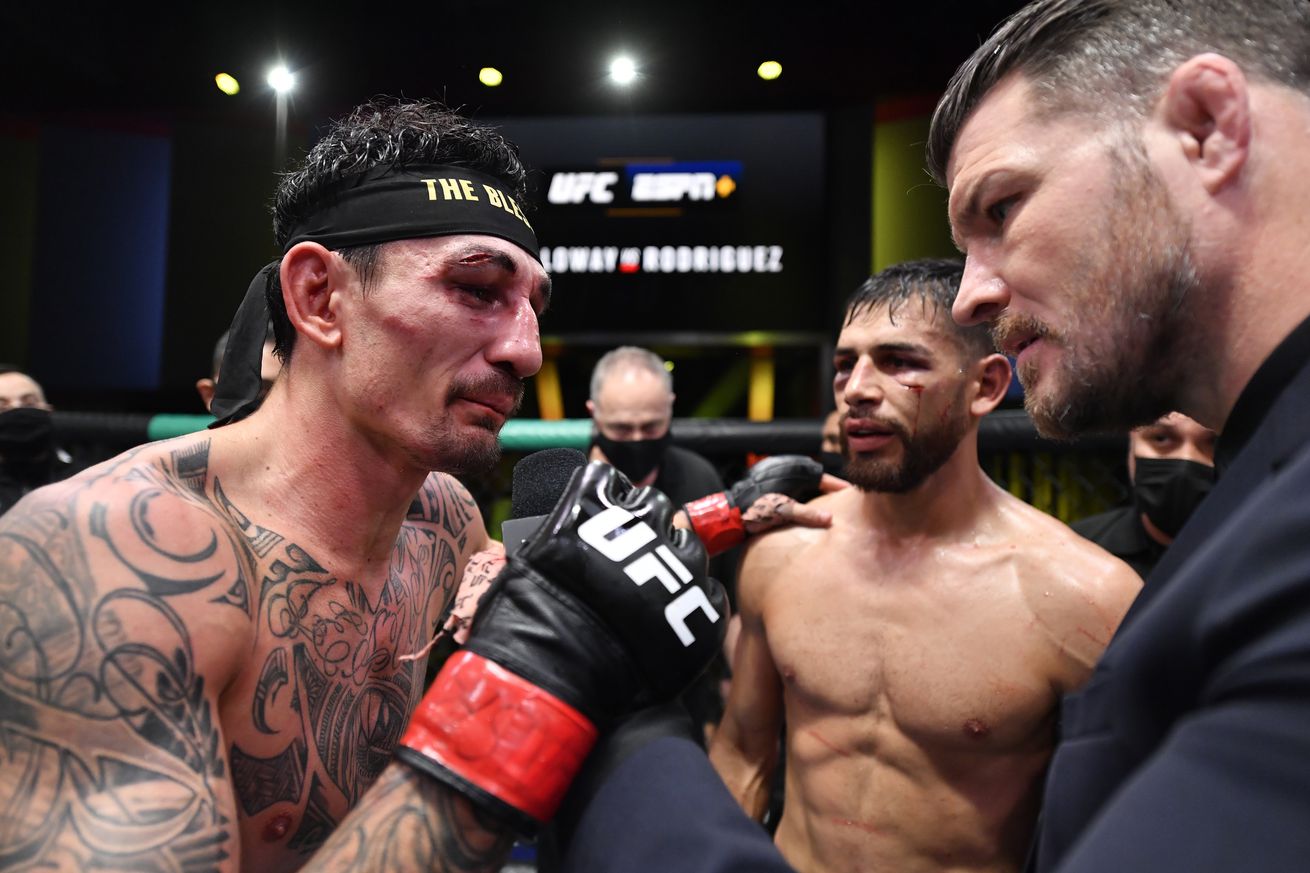 Who is next for Max Holloway and five more questions from UFC Vegas 42 UFC Vegas 42 is in the books and for a fight card that was heavily reliant on its main event, it delivered a lot of action. The main event scrap between Max Holloway and Yair Rodriguez was one of the best fights of 2021 and the nine stoppages made the event a joy to watch.

However, as with almost all UFC events, there were questions left unanswered and unresolved. I look at six of the biggest unanswered questions stemming from UFC Vegas 42, which took place at UFC Apex in Las Vegas and streamed on ESPN .

What s next for Marc Diakiese?

Marc Diakiese hoped a win over Rafael Alves at UFC Vegas 42 would get him back in the mix at lightweight. Things did not work out in Diakiese s favor on Saturday, as he was on the wrong end of an impressive first-round finishing sequence from Alves.

Diakiese opened his career on a 12-0 run and it looked like he had a bright future. His record since July 2017 is 2-5, and he s gone from fighting near the top of a pay-per-view card to competing early on the prelims of an afternoon ESPN streaming event.

The one bright spot for Diakiese is that he s only 28, and he has time to right the ship and get back into the mix. The best thing for Diakiese might be to look to regain his confidence outside the UFC.

Is Joel Alvarez a lightweight or a welterweight?

Joel Alvarez looked excellent on Saturday in picking up his fourth straight stoppage victory and third consecutive first-round finish. The problem with Alvarez s TKO win over Thiago Moises, who was the No. 15 ranked lightweight heading into UFC Vegas 42, was Alvarez missed weight. That might not have been a big deal if Alvarez had not also missed the lightweight limit for his previous fight, a first-round submission win over Alexander Yakovlev.

Alvarez was 1.5 pounds heavy for UFC Vegas 42 and 3.5 pounds over the mark for his UFC 254 bout against Yakovlev. The UFC rankings committee would be wise to hold off on putting Alvarez in the rankings with the next update and the UFC might want to get the scoop from Alvarez about his weight issues before it invests in him as a legit 155-pound contender.

Will UFC give Song Yadong time?

The 23-year-old Song Yadong picked up his seventh UFC win on Saturday with a TKO victory over Julio Arce. Yadong looked great in the win. His striking was fast and powerful and with the No. 15 next to his name in the official bantamweight rankings, Yadong might be on the fast track up the 135 pecking order, but Yadong and his team might want to slow things down and allow the young fighter some time to develop before throwing him at the top of the division.

The upper ranks of the 135-pound weight class are crowded, and it s going to take some time for that situation to work itself out with Aljamain Sterling, Petr Yan, Cory Sandhagen, Rob Font, Jose Aldo, Merab Dvalishvili and Chito Vera ranked above Yadong.

The UFC often rushes young fighters. There s no reason to do that with Yadong.

What s up with Herb Dean?

Herb Dean did a terrible job at stopping the co-main event at UFC Vegas 42. He was indecisive after grabbing Marcos Rogerio De Lima around the waist in the heavyweight fight.

UFC president Dana White said of Dean, Herb needs to stop touching guys unless the fight s over. He goes in and grabs him by the waist and then decides, Oops, maybe I m

But he s got to pull the trigger and stop touching guys. Don t touch them unless you re gonna stop the fight. And then when they played it back in slow motion, he s kinda, like, dancing. Like he doesn t know what to do, whether he s gonna jump in or not jump in.

White s assessment is spot on. Dean s indecision has not caused a worse case scenario event yet, but that has more to do with luck than anything else.

Dean s officiating needs to be reviewed and monitored. His job is to ensure the safety of the fighters and he is failing at that part of his job.

What was Conor McGregor thinking?

I m not sure what this was all about and I m still not sure.

What s next for Max Holloway?

UFC commentator Michael Bisping tried to get former featherweight champion Max Holloway to call someone out after his win over Yair Rodriguez in the main event of UFC Vegas 42. Holloway wasn t having it. Instead he said, To be the best you gotta beat the best, and the best is Blessed. They gotta come after me, baby.

I can appreciate that sentiment. Holloway could move to 155 pounds to fight Conor McGregor. He could move to 155 pounds permanently and pursue a title in that division. Holloway could face featherweight champ Alexander Volkanovski for the third time. I don t know what s next for Holloway, but I know he should have some say in that fight and that it should be extremely lucrative.