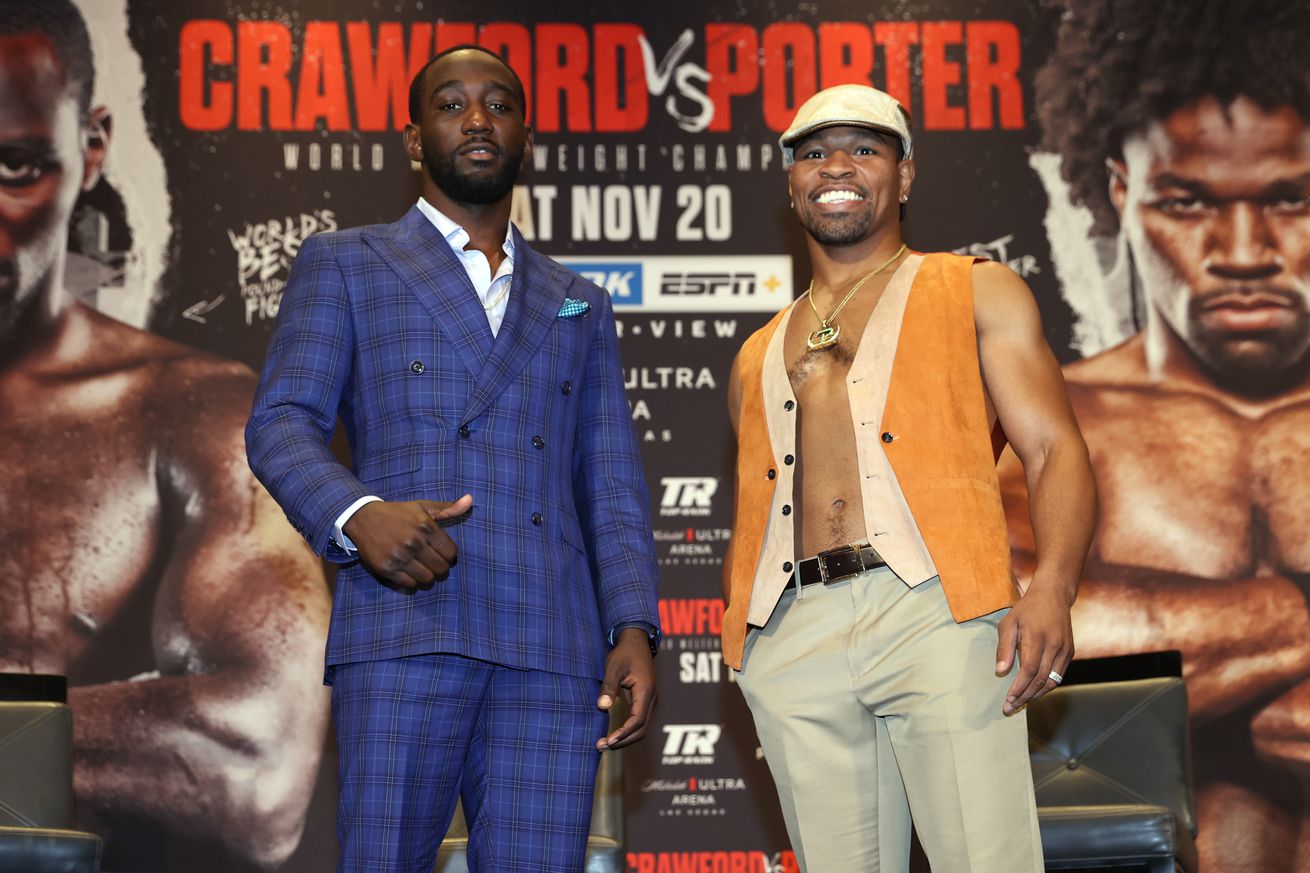 The WBO welterweight title is at stake on Saturday night in Las Vegas. On November 20th in Las Vegas, WBO welterweight champion Terence Crawford puts his title on the line in a marquee matchup against former WBC and former IBF champion Shawn Porter. This was a bout mandated by the WBO and instead of taking this to a purse bid, Top Rank and PBC came to terms on making this fight happen. Coming off Canelo Alvarez vs. Caleb Plant and Tyson Fury vs. Deontay Wilder 3 over the past several weeks, the good times keep rolling in the boxing world.

Let s get to the preview!

Can Terence Crawford finally get his statement win at welterweight?

For all of Bud s accomplishments from lightweight to welterweight, Crawford s resumeat 147 lbs is very weak. Jeff Horn s reign as WBO champion was questionable in the first place given the outcome in his favor against Manny Pacquiao. Jose Benavidez Jr was a pure grudge match and nothing more. Amir Khan wasn t a relevant welterweight at the time and isn t one now. Egidijus Kavaliauskas is a decent win considering Mean Machine has since gone on to give Vergil Ortiz Jr a difficult fight, and Kell Brook has not been a relevant welterweight since Errol Spence Jr stopped him in 2017.

Porter has fought the best perhaps more consistently than any other current welterweight in the sport. He s got close wins over Yordenis Ugas and Danny Garcia and close losses to Keith Thurman and Errol Spence Jr. He is universally considered a top-5 fighter in his division and would be far and away Crawford s best win at 147 lbs.

The end of Crawford and Top Rank?

Crawford is a free agent after Saturday s fight, and there s not been any indication that he will re-sign with Top Rank Boxing ESPN. He has struggled to get the big welterweight fights while under the Top Rank banner, and PBC which includes Porter, Keith Thurman if he s still fighting, Yordenis Ugas, and Errol Spence Jr figures to be a much more viable option for as long as he stays at 147.

But the other aspect of Crawford s future with Top Rank is promoter Bob Arum pretty much trashing Terence publicly in more recent times, namely his lack of commercial success and how Top Rank is apparently losing money on his bouts. He doesn t seem particularly eager to commit to a new contract with Crawford, but didn t rule out the possibility of still working with him on a fight by fight basis.

Canelo Alvarez is a promotional free agent and has a lot of freedom to go where he wants. We ll see if Crawford is the next big named boxer to join him should he get past Porter on Saturday.

What is Shawn Porter s best path towards pulling off the upset?

We won t bother with a what Crawford needs to do because he s ultimately a sizable favorite and considered to be one of the best pound-for-pound boxers in the world. The onus is on Porter to craft the ideal gameplan to accomplish what no one else has ever done to Terence at a professional level.

If Crawford is an aesthetically pleasing boxer to watch he s one who s adept at fighting from southpaw or orthodox Porter is comparatively crude, but it s not like he s a formless brawler. He will rough you up against the ropes and trade on the inside at a good clip. Porter likes to break his opponents down by aggressively pressuring and throwing mostly power shots over working behind a jab.

There is functionally no chance of Porter having the technical acumen to just outbox Crawford at range and it s really not his style to do so. He ll have to take chances without being too reckless and get Crawford on the backfoot. Strategically dirtying up the fight and making Crawford uncomfortable is far easier said than done, of course.

What s interesting on the undercard?

Hardly anything on the pay-per-view undercard, to be brutally honest. The odd thing is that the best fights below the main event are on the ESPN2 broadcast, with former junior featherweight champion Isaac Dogboe taking on Christopher Diaz in the featured prelim. There s a high chance that ends up being a slugfest between two action fighters who don t really know how to be defensive. I highly recommend checking that out as it s by far the most intriguing bout outside of the main event.

As for the actual PPV broadcast, Brazilian Olympic silver medalist Esquiva Falcao faces fellow unbeaten Patrice Volny of Canada in an IBF middleweight title eliminator. It is not a particularly interesting fight. Janibek Alimkhanuly is a terrific middleweight prospect who will face former secondary WBA world titlist Hassan N Dam N Jikam. Alimkhanuly is coming off a stoppage of Rob Brant, who also briefly held the WBA s secondary title. This is somewhat of a sideways move for the Kazakh fighter, but he s developed into a quality boxer-puncher and N Dam s best days are most likely behind him. He is usually tough to finish despite his ridiculous knockdown counts in his higher profile fights vs. David Lemieux and Peter Quillin.

Opening the PPV is lightweight Raymond Muratalla against Elias Damian Araujo. Muratalla has seven straight knockout wins and is generally fun to watch, but an 8-rounder against short notice replacement Araujo isn t really meant to be a super relevant fight.

This fight really depends on how well Crawford can adjust to Porter s physicality and rough-housing on the inside. There s no doubt who the superior boxer and puncher is, but Porter has been exceptionally hard to cleanly defeat and has a terrific chin. The speed and precision of Bud s counterpunching may lead to Shawn running face first into trouble, and his aggressiveness could be used against him.

Crawford has been stunned before against Yuriorkis Gamboa and Mean Machine Kavaliauskas, but he s never been knocked down although the Mean Machine right hand that hurt him was pretty damn close to being a knockdown and Porter is not an overly powerful fighter against high-end competition and has a bad habit of turning his power shots into arm punches. I suspect this will be a trickier fight than anticipated for Bud but once he gets Porter s timing down he ll pull away late and maybe even score a knockdown or two. Terence Crawford by unanimous decision.