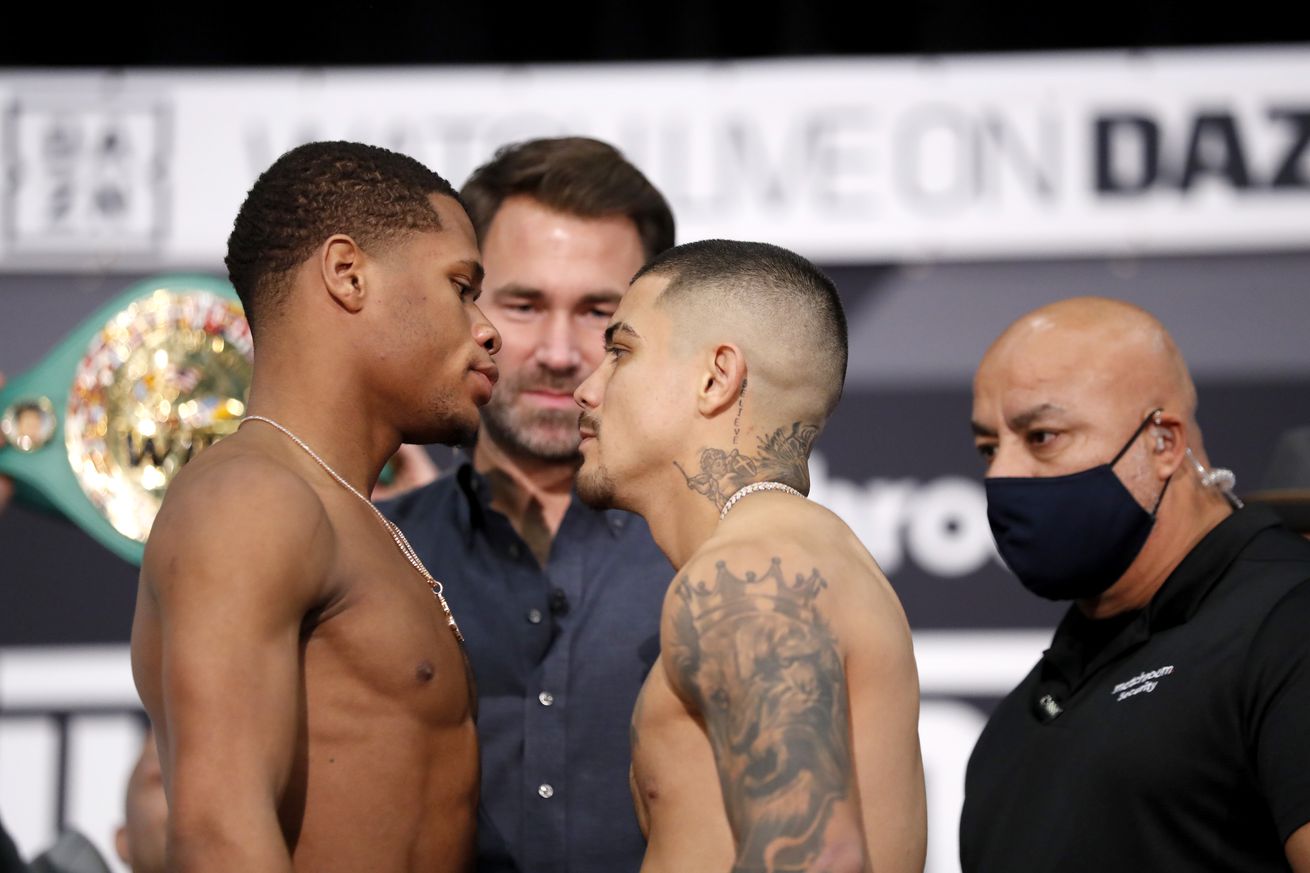 Two big lightweight fights on separate cards and on separate days! After last weekend s shocking win for George Kambosos Jr over Teofimo Lopez, the lightweight landscape in boxing has experienced a major shift. Kambosos has plenty of options for his next fight, and plenty of people who want his WBO, WBA, and IBF titles.

As boxing continues its strong run to end 2021, fans will be treated to a pair of big lightweight main events over the weekend. The first one is on DAZN in Las Vegas while the second one and bigger fight in terms of public interest is a rare Sunday night pay-per-view in Los Angeles. Let s get to the preview!

What to watch for: Haney is one of boxing s top young rising stars. At just 23 years old he has been a professional since he was 16 and has burst onto the scene over the past couple of years. After mostly featuring on ShoBox cards he s been a mainstay on DAZN, including a spectacular KO of Antonio Moran. He became WBC interim champ when he stopped Zaur Abdullaev in 2019, then upgraded to full champion when Vasiliy Lomachenko got franchise champ status or whatever nonsense the WBC created. Haney passed his biggest test in May when he bested former champ Jorge Linares by decision, but he didn t have an easy time with the Venezuelan.

Diaz was actually supposed to box Ryan Garcia before Garcia withdrew due to injury, so this fight was made instead. His only loss came at featherweight against WBC champ Gary Russell Jr, and he won his only major world title at 130 lbs by usurping IBF champ Tevin Farmer. Diaz lost his title on the scales when he came in heavy against Shavkat Rakhimov, so he moved up to lightweight and bested Javier Fortuna.

Haney has a great jab and is a slick boxer... I don t want to say akin to Floyd Mayweather because that s ridiculous, but he tries to fight like him at times. He s not a big puncher but he has some pop. Diaz is pretty good at everything without excelling at one specific area, but I d say he s more aggressive now than he used to be.

Why you should watch: Diaz is a live dog in this fight. Unfortunately he doesn t really have the power in theory to trouble Haney the way Jorge Linares did, but he s a very solid boxer with an excellent chin and he s shown in recent fights his mettle and willingness to get into intense exchanges. If he can make Haney uncomfortable this could be a tricky bout for the champ.

Notable undercard fights: Undisputed women s welterweight champion Jessica McCaskill defends her titles against short notice replacement Kandi Wyatt. There are a lot of prospects on this card including Marc Castro, Austin Williams, Filip Hrgovic, and Montana Love. I d be most interested in Hrgovic and Love, although there are not a lot of competitive looking fights in general on the broadcast.

What s at stake: Davis WBA regular lightweight title, which is essentially the next tier below the belt Kambosos has.

What to watch for: Tank Davis made a successful foray up to 140 lbs in June when he knocked out Mario Barrios in a highly compelling and competitive main event. This is his first bout at lightweight since last year s unbelievable KO of Leo Santa Cruz with the uppercut from hell. You don t need me to tell you that Davis is a gifted puncher with devastating speed to go along with it, but I ll tell you anyway so it sounds like I m knowledgeable.

Mexico s Cruz is replacing Rolando Romero, who was pulled following multiple sexual assault accusations against him. Yes, Davis has a domestic violence charge caught on camera, too and an active hit-and-run case against him, but I guess those are the perks of being the A-side. Anyway, Isaac Cruz is a more than credible replacement and frankly an upgrade over Romero, whose entire basis for getting this fight is his personal beef with Davis. The 23-year-old Mexican raised eyebrows with his one-round mauling of ex-title challenger Diego Magdaleno, and has since followed that up with decisions over Juan Matias Romero and ex-WBC 130 lbs king Francisco Vargas.

While not as heavy-handed as Davis, Cruz has considerable punching power and is both aggressive and has an impressive workrate. I personally prefer this over the original matchup, but that s because I m really not sold on Romero as a legitimate contender at all.

Why you should watch: On paper this should be an easy win for Davis, but I gotta shut up about that after what happened to Teofimo last week. Cruz is more than willing to make fights ugly and bend the rules a bit, but in general this should be high-octane and someone likely Cruz is getting KO d.

Notable undercard fights: I love this undercard which I rarely say about boxing PPVs. The scientific marvel that is 6 7 junior middleweight Sebastian Fundora against Spain s Sergio Garcia is the co-main event. Former middleweight title challengers Sergiy Dervyanchenko and Carlos Adames square off in a fight that is easily the most violent outside the main event. Eduardo Ramirez takes on veteran Miguel Marriaga at featherweight, and Ramirez has been racking up the KOs lately for someone who s KO ratio is sub-50 .