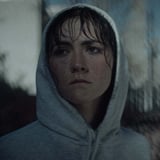 Get the Full StoryIsabelle Fuhrman as Alex Dall in The Novice. Image Source: IFC Films

You might know Isabelle Fuhrman best as the sharp-tongued and sharp-toothed Clove from The Hunger Games or the haunting Esther in Orphan. But I know her best as my running teammate and a formidable athlete. And it's those qualities that help her shine in her newly Independent Spirit Award-nominated role in The Novice. The nod was one of five the film racked up, alongside best feature and best director.

In the film, Fuhrman plays Alex Dall, an obsessive college freshman whose drive to land a spot on the varsity rowing team pushes her - and nearly everyone around her - to a breaking point. Directed in dark tones and anxious cuts by Lauren Hadaway, it's the kind of movie that makes your heart race and your palms sweat just watching it. It's also the kind of film that many athletes will see themselves in, for better or worse.

Fuhrman and I first met in 2018 when we laced up alongside some 20-plus other women to run our first 26.2 miles at the Chicago Marathon. After achieving that goal, and hungry for more, she and I signed up with six other women to run our first ultramarathon: The Speed Project. The unsanctioned, wild relay race has teams run from Los Angeles to Las Vegas, through the desert - nonstop. As you can imagine, it's hard. Really, really hard. But Fuhrman was not deterred, even though she broke her wrist just before the race, and powered through in a cast. I also emerged from the race scathed, in a medical boot. But while the 50-plus hours of running through the desert in some ways literally broke us, it also helped us form a lifelong sisterhood and prove to ourselves we could withstand almost anything. And, it turns out, it also helped convince Hadaway that now-24-year-old Fuhrman was the right pick for the leading role in The Novice. Read on for more of my conversation with the actor-slash-athlete, and catch The Novice in theaters and on digital on Friday, Dec. 17.

POPSUGAR: I told my colleagues, "Look, I know Isabelle well, and I know how much she busted her ass training for this movie." I have seen you run through the desert for literal days on end with a cast on your wrist - come on! How did this compare training-wise, in how grueling it was?

Isabelle Fuhrman: I have a long relationship with running. There're times I hate it, but times I love it. And then times I'm doing it all the time, and times I take a little break. And this movie was like having an obsessive, crazy love affair with the sport. It was six hours of training every single day for six weeks leading up to it. I was driving to Marina Del Ray at 4:30 in the morning in pitch-black darkness, getting out on the water in this boat. And then literally having a break to nap for 15 minutes and eat and then was back on the water for three more hours. And then I would work out with trainer Bec Wilcock for an hour and do weights afterwards. I was watching Olympic rowing videos. I even got so sucked in that I was on the Reddit boards of rowers, laughing at the memes that people post because I understood what it was like to have your hands literally ripping off from the blisters. And it was a completely different kind of muscle group. Running, you feel sore in certain parts of your body, and your legs, and sometimes all over. But with rowing, it was like, my glutes, my quads, my ass, my abs, my traps. I felt so broken but also, simultaneously, the strongest I'd ever felt in my entire life.

PS: Rowing is a pretty niche sport. Honestly, you probably could have dialed it in and most people watching wouldn't have necessarily noticed. Why was it so critical to you to get this right and look like you really knew what you were doing?

IF: Mainly because of Lauren, our director. Lauren rowed in college; this movie is loosely based off of her own experience. And she told me from the first time we met that there was no body double. The camera was going to be in the boat with me. And I had to be able to row, not only because of the camera, but also because of the fact that it's a team sport. I felt really intimidated when we showed up in Peterborough and we met the coaches and girls who were going to be in the boats with us, who were rowers at Trent University. But they were so welcoming and supportive - very much like the running community - trying to help and making sure that I like felt good at what I was doing, giving me all the lingo and the jokes and helping my form.

PS: I know you also actually wrote Lauren Hadaway a letter and used The Speed Project as an argument that, "Hey, I can put myself through it." I have been there with you, crying, suffering, but also having a lot of fun. I'm dying to know what anecdotes or experiences from that race you told her about.

IF: I basically told her, "I loved your script, but I'm not going to write you a letter about acting, because you can see my audition, and you can watch movies I've done. I'm going to write you a letter about why you have to hire me because I am the only one who can physically do this. And emotionally handle it." It was like, I know what it's like to wake up middle of the night or in the morning and push myself when I don't feel like I can anymore. And I know what it's like to have a team of people relying on you. And I know what it's like to literally feel like you want to cry all the time because you are so exhausted and push through it. I actually attached pictures. Of me in the van with the ice on my leg, crying. I think the one, though, Lauren probably felt the most connected to was the photo of us in Vegas. And I was drunk after three sips of Champagne, holding the Mo t Chandon, with the cast on my wrist, crying in front of the Vegas sign, and Hannah Minardi, our teammate behind me, just terrified. I circled Hannah's face and I was like, "See how terrified my friend is because I was so emotional?" I think she saw that and was just like, "Wow, this girl's kind of insane. And I need that in this movie."

A photo of Fuhrman and the author's running team at The Speed Project finish line at the Las Vegas sign in 2019. Furhman is third from right, author is far right. Image Source: Courtesy of Lindsay Miller

PS: This movie was so physically demanding, but also it deals with mental health and self-harm. Did you have to build in some self-care rituals during shooting? How did you decompress and stay healthy enough to go to that place every day?

IF: I remember having this moment on a Sunday - I had one day off a week and I slept till 4 p.m. - when I got up to get my protein shake and go to the gym. I was like, "I think I have to maintain this level of exhaustion the entire way through." Because this really was me in a place where I felt like an open wound. I felt really, really raw. I think the thing that kept me balanced, honestly, was that I was so passionate about this project. I loved working on it every day. And you know from training for races, there's nothing better than waking up in the morning with a goal and a purpose, and being excited about it. At the end of the day I would go home and I would take the most scalding-hot bath that I could with a ton of Epsom salt, just to feel like I was here and alive.

PS: Your character is killing herself to achieve and to perform. I feel like a lot of young people can relate. Did going through the pandemic change your own relationship to achievement and ambition?

IF: After this movie ended, I felt like weirdly, a chapter of my life closed. I have been this person for a lot of my life. If I wasn't filming a movie, I was training for a race. When everything happened in March, it was the first time I had to sit down and relax and not have a next. And I actually ended up finding such peace. I love running, but I don't do it all the time, every day. I have a little bit healthier of a relationship with it. I don't always bring my watch and time it. I enjoy it.

PS: You could tell that athletes wrote it, directed it, and were acting in The Novice because of how much eating was just in the background, all the time, on this constant thrum. That, to me, was honestly so refreshing, to see a bunch of women on screen eating in the way that they did. Was that something that you guys had clear conversations about?

IF: That scene where I'm shoveling in food at the table - that was not necessarily, I would say, a choice. I remember that morning very vividly. I woke up early. I went and worked out at the gym, and I spent an hour in the water tank. And I remember getting to set and being so hungry. Lauren was like, "Whoa, in this scene you're going to be eating, so you shouldn't eat until you do the scene." They gave me a plate of egg whites with vegetables and I was just shoveling it in. I remember, when I watched, I was like, "Gosh, I'm with my mouth full and everything." And I was like, you know what? That's what it's like.

IF: I mean, I was eating like that all the time. My boat in the movie, the single scull that I used, was hilarious. Because you're strapped in and there's no space for anything. Underneath my legs were two protein-powder shakers and a giant bag of locally sourced beef jerky - huge amount. And I would just be sitting in between takes just eating, eating, eating, eating.

IF: I think mentally the biggest was when I came on set and I had done a lot of training in a single scull. The biggest hurdle was getting in the boat with all of the girls and realizing, in comparison to all of them, "Oh crap."

PS: You're like, "Oh, I'm still short and have 20 pounds less of muscle than these women do."

IF: I'm just huffing while I'm pulling these oars back. Physically, the biggest hurdle was definitely the blisters on your hands. That's a real, serious injury that a lot of girls have in rowing. You get these blisters. They're big, they're painful. And then once the blister callouses over, for a moment you're great. And then the callous rips off and it's horrible all over again. I also bit my nails like crazy doing the movie. It was funny, because I remember I felt very much out of my own body. I didn't even recognize myself looking in the mirror. I've never been built like that before. I've always been very small. To have muscles and to feel bigger, it changes your posture. It changes the way that you walk. It changes the way that you feel. I felt very strong and very fragile at the same time.