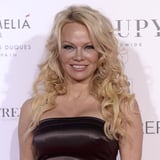 Get the Full StoryPamela Anderson is splitting from her fifth husband, bodyguard Dan Hayhurst, after one year of marriage, according to Rolling Stone. The Baywatch star is filing for divorce in her home country of Canada, where the couple had been residing since tying the knot at her Vancouver Island residence on Christmas Eve in 2020. A source described their relationship as a "pandemic whirlwind" that ultimately fizzled.

Anderson and Hayhurst's impending divorce comes two years after she wed film producer Jon Peters in January 2020, only to call it quits 12 days later. Before that, the 54-year-old actor was married to singer Kid Rock, poker player Rick Salomon twice , and, most famously, M tley Cr e drummer Tommy Lee, with whom she shares two sons, Brandon, 23, and Dylan, 22. Their tumultuous relationship is the subject of Hulu's forthcoming drama series Pam & Tommy, which premieres on Feb. 2. Both stars have confirmed they were not involved with bringing the series to life.