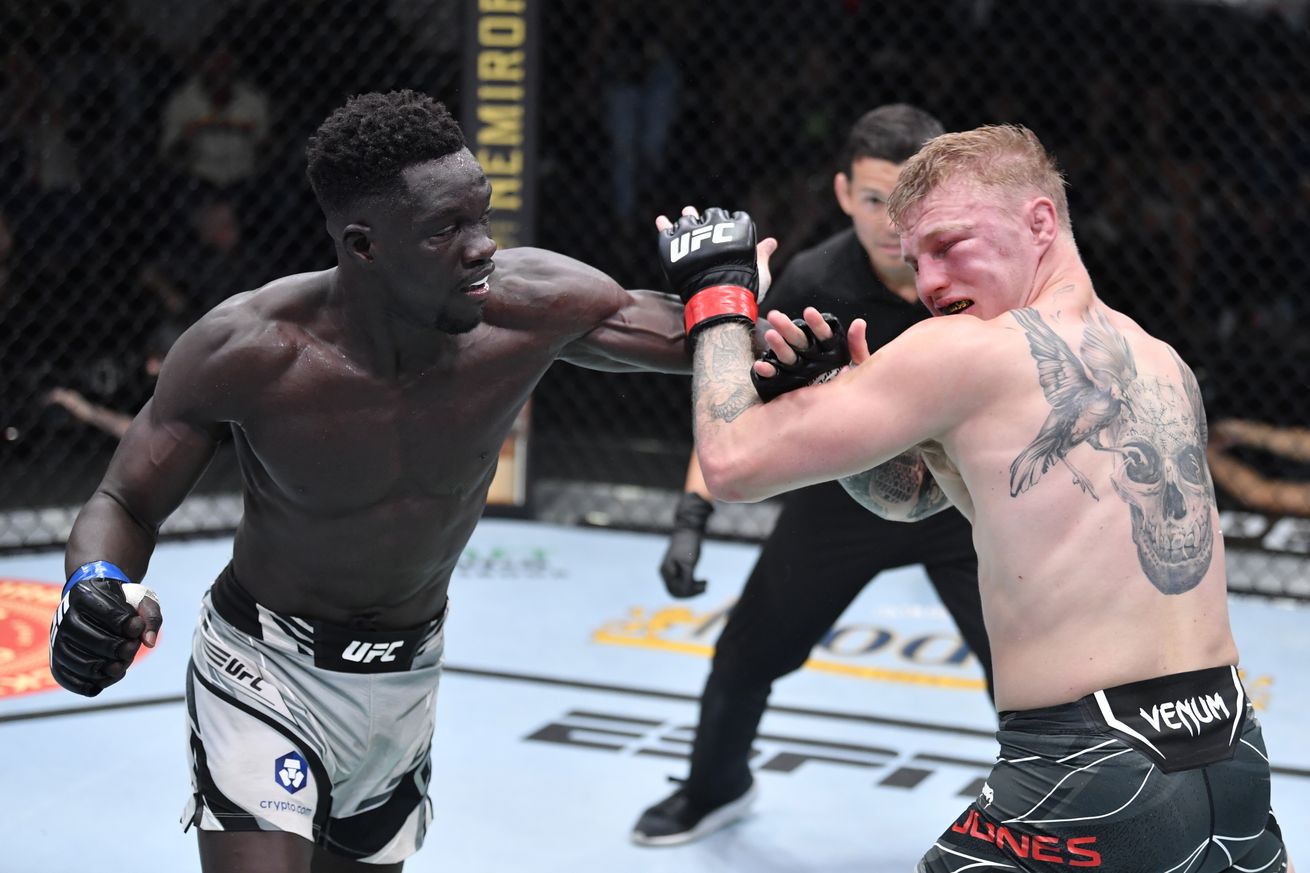 Onama, who was 8-0 as a pro before his loss to Mason Jones at UFC Vegas 41, won the FAC 145-pound title on October 8, 2021. The fighter, who trains with James Krause at Glory MMA and Fitness, went on vacation after winning that belt via a first-round knockout of Brad Robison.

That holiday came to an abrupt end when Krause woke him with a 4 a.m. phone call telling him he had the opportunity to face Jones in the UFC at lightweight on short notice. Krause s call came on the Monday of fight week.

Despite his unanimous decision loss 29-28x3 , Onama ended up as a winner in my post-fight assessment.

David Onama took a fight against Mason Jones on incredibly short notice and while he was on vacation and he gave the heavily favored Jones fits throughout the lightweight scrap. Onama showed a lot of power and striking ability, but he struggled to stop the takedowns of his opponent.

Judging by my social media feed, Onama s next fight is going to be one circled in red with must watch written next to it. Onama is only 27 and if he can build on his decision loss to Jones, he is going to be someone to watch.

Onama, who became the first Ugandan-born fighter in UFC history when he stepped into the octagon against Jones, did not seem discouraged by the loss. In fact, he s reaction to the first setback of his career was positive.

After that fight, it was a loss, but it felt like I won, Onama told UFC.com. And the feedback I was getting from fans, family and friends was that I showed the world what I could do. That s what I was expecting people to say, and it showed. I went out there and did what I had to do. I didn t get my hand raised, but it felt like a win. It felt good.

With a full camp behind him and fighting at his normal competition weight, Onama is a -150 favorite over Gabriel Benitez, who has been with the UFC since 2014. Benitez is 1-3 in his past four fights, but he has claimed fight-night bonus awards in his two most recent outings, including a Fight of the Night bonus for his most-recent outing, a July 2021 TKO loss to Billy Quarantillo.

This should be a very active striking affair and Onama will have his hands full with the aggressive and resilient Benitez. Another thing to note about Benitez is that he does not go for takedowns often. In his 11 UFC outings, Benitez has attempted two takedowns. He landed one.

If you need a reason to watch the UFC Vegas 48 prelims, this is the bout that inspire you to do so.