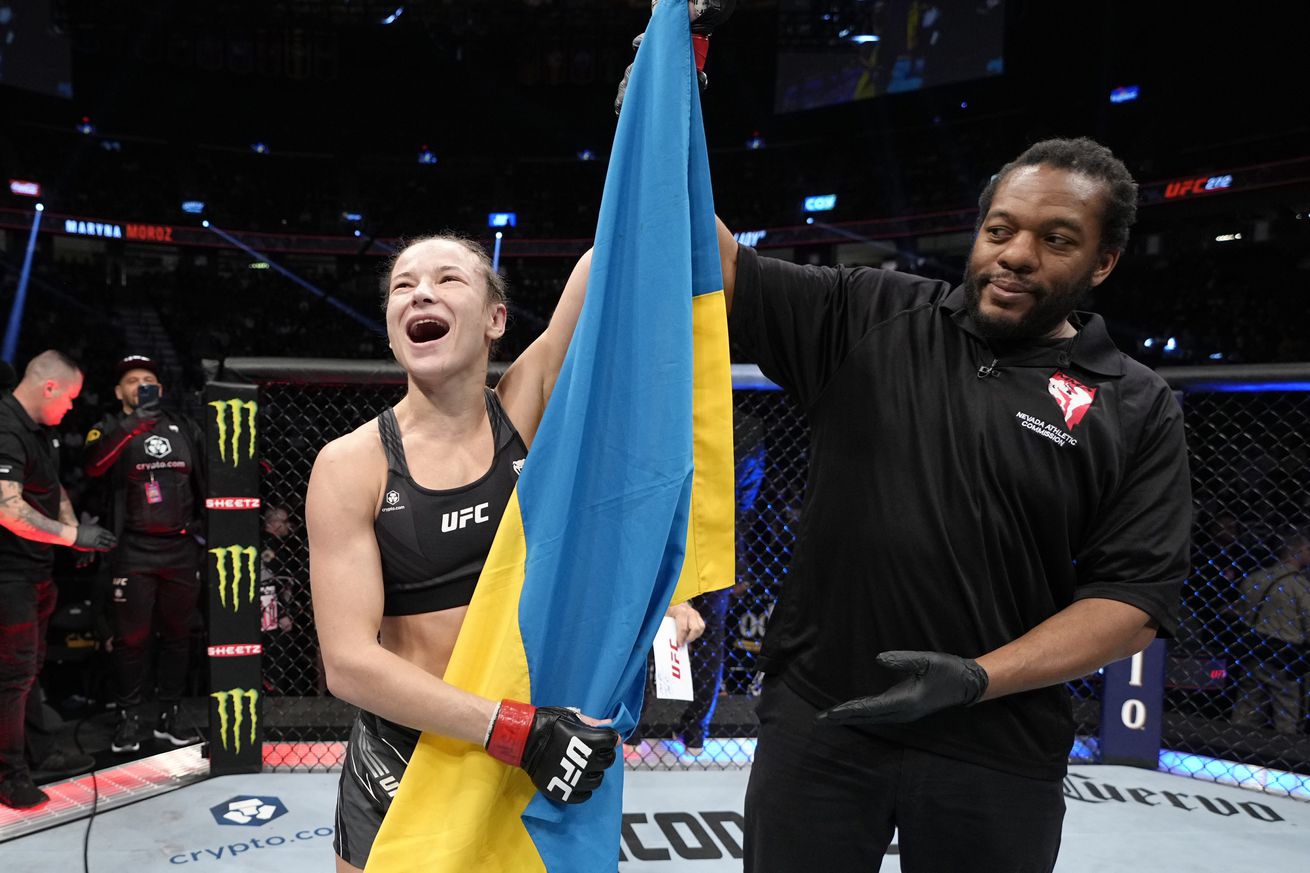 On the UFC 272 prelims, Jalin Turner Jamie Mullarkey , and the Ukraine s Maryna Moroz stopped Mariya Agapova with an arm triangle. The UFC 272 prelims are in the bag, and closed out with two finishes and two wonky split decisions across four matches. Closing out the prelims, Jalin Turner dropped Jamie Mullarkey with a right hand and then finished him off with ground strikes in the second round. This was a banger of a fight, as Mullarkey came to bang and did some descent damage of his own. This was Turner s night to shine, though, and The Tarantula is now the owner of four wins, and four finishes, in a row.

Before that, top rated strawweights went at when the #3 ranked, Marina Rodriguez, edged out a split decision over the #4 ranked, Xiaonan Yan. It seemed like Yan had taken the first-two rounds by countering with angry hands, with Rodriguez coming alive at the very end of the second and in the third with her own volume. This was a close one for sure, but how did you score it? Oh, Rodriguez is now on a four-fight winning streak.

Another eyebrow raising result came when Nick Negumereanu won a split decision over Kennedy Nzechukwu, in a matchup where the scorecards required a bit of extra math. Nzechukwu lost a point in the third round for habitual eye pokes, resulting in two 29-27 s for Nick and one 29-27 in favor of Nzechukwu. How did you score this one?

Opening up this part of the prelims, Ukrainian native Maryna Moroz earned herself a second round submission of former teammate, Mariya Agapova. Moroz went right to her grappling, and by the second act she found her moment to sink an arm triangle and get the tap. Moroz received a tremendous ovation from the Las Vegas crowd, and was also brought to tears in her post-fight interview when talking about the Russian invasion of her country. In a ultra-rare sight, Moroz was actually able to take the mic away from Joe Rogan, but can you really blame Joe for not taking it back?

Jalin Turner def. Jamie Mullarkey by TKO at :46 of round 2: Lightweight

Mullarkey popped Turner with a right hand to get things going. Turner responded with some mean knees from the clinch that seemed to hurt Mullarkey. As Turner got more aggressive, Mullarkey countered with a hard punch before entering the clinch. Turner unleashed more knees to get Mullarkey to back off him, and the madness continued. It felt like at any moment someone was going to fall. The brawl continued as both men were both landing and absorbing flush punches. Mullarkey blasted a takedown with less than a minute to go in the round, and tried to land a couple of elbows before the bell. What a round! The second round saw Turner tag Mullarkey with some crisp punches. A right hook sent Mullarkey to the canvas, and some fluid ground and pound finished the fight!

Rodriguez look to dictate the pace by taking the center, but Yan was stinging her with angry punches as she tried to advance. Yan started to press forward, letting her hands go and being the faster fighter. With little time left in the round, Rodriguez accidentally kneed Yan in the crotch. That resulted in a pause and the doctor briefly stepping in. The bout resumed and Yan hit a takedown before the bell.

Rodriguez took the initiative again to begin the second act, but kept getting met with counter punches. Yan then hit a takedown, and then forced Rodriguez to carry her weight for a bit as she worked to stand up. In open space, Rodriguez landed some nice knees on the inside, and then had her turn at making Yan support her weight. Before the bell, Rodriguez connected with an elbow and a flurry of punches that Yan couldn t get away from.

Rodriguez pressed forward in the third round, landing with her volume. Yan wasn t throwing in combination like she was in the first-two rounds, but she was still connecting. Rodriguez was just throwing more and landing more. A small cut formed around the right eye of Rodriguez, but it didn t seem to bother her any. Down the stretch, the warriors traded punches back and forth in an exciting display of heart and determination.

Nzechukwu took the center and started to methodically march forward. Negumereanu was staying on the outside, looking for an entry into striking range. There was mana accidental eye poke from Nzechukwu, resulting in a pause and a stern warning. Not many strikes were landed on either side, but Nick did start to push Kennedy backwards.

Negumereanu look to push the pace to open the second stanza. He was able to get on the inside and into the clinch against the fence. The fight stalled out there, forcing the ref to intervene and break them apart. Nzechukwu started throwing straights and jabs, catching Negumereanu on the end of them. The nose of Nick was busted open, appearing to be the most significant damage sustained up until this point in the match.

Negumereanu was badly poked in the eye less than 20-seconds into the third round. The doctor was brought in, and after some time, Nick decided he was able to continue. Nzechukwu lost a point for the infraction. The fight resumed and Negumereanu landed some punches on his way into the clinch. He tried to get Nzechukwu to the ground, but just couldn t solidify the position before Kennedy got back to his feet. Negumereanu tried to make it ugly and turn it into a brawl, but had to eat a lot of shots to get to his target.

Moroz clinched up, pressing Agapova against the cage. She was trying to get the takedown, but Agapova was being stubborn. Moroz was finally able to get her down, and went right to the back. She threatened with an RNC, making several adjustments as Agapova defended. Agapova escaped and took the back herself, prompting Moroz to stand to her feet and escape. Moroz landed some menacing foot stomps before the bell.

Moroz punched her way into the clinch to begin the second act, pressing Agapova against the fence. She got another takedown, and started to control from the back once again. When Agapova would turn over, Moroz would drop some ground and pound to get her to expose the back again. The punches started to come more frequently, and Moroz used the moment to lock up an arm triangle. After a bit of a struggle, Agapova tapped out.