The 2022 Grammys Reunited the Music World 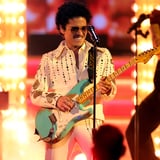 Live music events have been up in the air since the start of the pandemic in 2020. But with proper safety precautions in place, the Recording Academy finally brought the music community back together again for the 2022 Grammy Awards.

On the eve of Grammys weekend, hundreds of celebrities, industry folks, and eager fans poured into Las Vegas for music's biggest celebration of the year. I arrived in the vibrant city just in time to attend three days worth of Grammy events courtesy of Mastercard and its long-standing partnership with the institution. With a joint mission to connect people with music and entertainment, Mastercard and other brands' sponsored Grammy events were filled with nothing but joyous musical moments. From Grammy U's Masterclass discussion powered by MasterCard and led by famed music video director Hannah Lux Davis, to Grey Goose Essences Sound Sessions event featuring Tinashe, the Grammys put music first.

"To hear my music performed so well by everybody that was onstage, I was very impressed with the quality of the talent that appeared here tonight."

One of the biggest pre-Grammy events this year was MusiCares' star-studded person of the year ceremony, which honored the great Joni Mitchell. On Friday night, the 78-year-old icon was celebrated by her peers, with musicians Brandi Carlile and Jon Batiste leading the charge for an elite lineup of performances. Stars like John Legend, Chl e, Billy Porter, Mickey Guyton, and Cyndi Lauper also blessed the MGM Grand Marquee Ballroom stages with captivating renditions of Mitchell's greatest hits - including "Woodstock," "Chelsea Morning," "Both Sides Now," and "River"; Meanwhile, celebrities such as Clive Davis, Meryl Streep, Lionel Richie, Neil Young, and Elton John delivered virtual congratulatory messages. The audience basked in an extraordinary musical evening one could only dream of.

The prestigious event was remarkable to witness, but the closing number of "Big Yellow Taxi" from nearly all the evening's performers marked the best moment of the night - especially when Mitchell joined them on stage for her first performance in nine years. Just before her performance, Mitchell formally received her honor and briefly expressed her gratitude to the Recording Academy. "This is such an exciting musical evening for me," she said. "To hear my music performed so well by everybody that was onstage, I was very impressed with the quality of the talent that appeared here tonight."

The following night was an exceptional inaugural event presented by the Recording Academy's Black Music Collective. For the first time in the Grammys' 64-year history, the institution held the Recording Academy Honors to exclusively celebrate the impact, mastery, and power of Black music.

The ceremony saluted five icons on Saturday night: Legend, DJ D-Nice, MC Lyte, Rigo "Riggs" Morales, and the co-founders of Atlanta-based record label Love Renaissance, aka LVRN Justice Baiden, Sean Famoso McNichol, Carlon Ramong, Junia Abaidoo and Tunde Balogun . Legend, who received the global impact award, delivered a moving speech that evening that saluted the influence of Black artists. "I'm proud to celebrate, honor, and cultivate our music, because Black music is, and has been, the rhythm, the root, the inspiration, and the innovation behind so much of the world's popular music - it doesn't exist without us," he said. "We've been so blessed to be part of that tradition; to be Black music makers - that's something worth celebrating and something worth being proud of."

In between giving each honoree their well-deserved flowers, artists like Summer Walker, Muni Long, Cordae, Chl e, and Jimmie Allen graced the stage with dazzling performances that left the crowd bewitched. The luxe event brought all the stars out - including Saweetie, Tiffany Haddish, and Jimmy Jam - to kick off what many myself included hope will become another esteemed Grammys tradition. If next year's ceremony is anything close to what I observed Saturday evening, then the Recording Academy should know they have something incredible on their hands.

Though the events leading up to the 2022 Grammy Awards perfectly ushered in a music-filled weekend, Sunday's production was the grand finale we were all waiting for. The Grammys red carpet filled up with our favorite stars as other attendees sauntered into the MGM Grand Garden Arena for a night of performances and honors. Unlike other shows that prioritize handing out awards most of the night, the Grammys' music-forward approach continues to be its formula for success.

Show-stopping performances from Silk Sonic, Olivia Rodrigo, Billie Eilish, Lady Gaga, Legend, H.E.R., Nas, Justin Bieber, Lil Nas X, BTS, and Batiste made the Grammys feel like one big concert. So much so that fans in the audience and at home didn't seem to mind the ceremony being three and a half hours long. But, of course, the show didn't stop at the arena. Silk Sonic kept the function going at an afterparty at Delilah in the Wynn Hotel, while OneOf's post-Grammys event at Hakkasan featured appearances from Anitta, JUNGLE, and Mike Tyson.

The music world was happy to reunite again for this year's Grammys. The energy in the show's arena was buzzing with excitement as people laughed, cheered, and danced alongside each other. Compared to previous shows, the 2022 Grammys wasn't all about artists competing for awards - it was strictly a festive occasion. So my hope for future award shows is they'll all have that same sense of camaraderie, too.