15 articles all 'The Office' superfans need to read 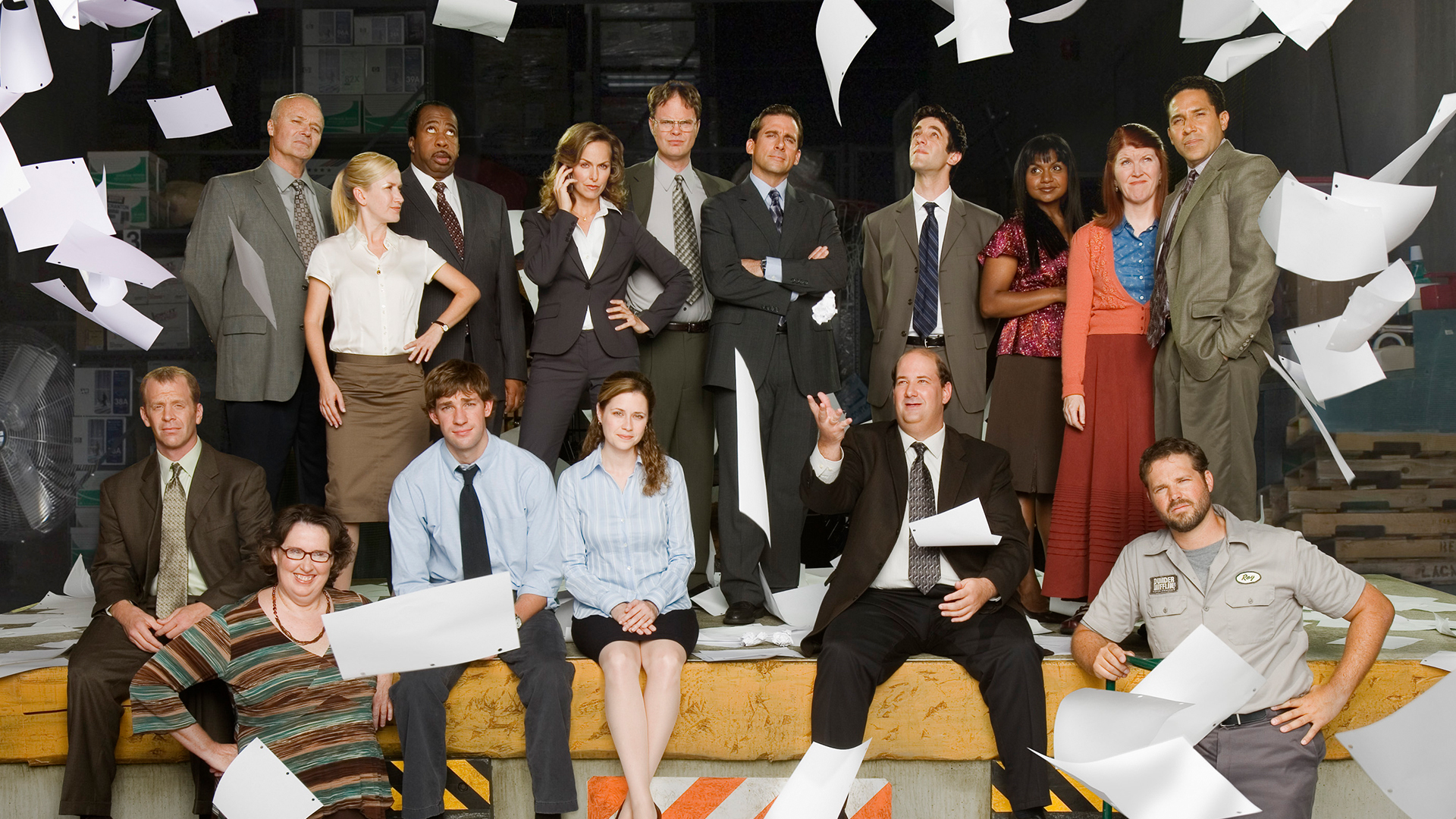 Get the Full StoryBears. Beets. Bringing you fresh coverage of The Office nearly two decades after the show premiered.That's basically Mashable's motto, and in the spirit of upholding that motto, we've compiled a handy list of some of our best articles on The Office. You can binge-read them or bookmark and scroll through at your leisure. But we highly recommend you check them all out ASAP. From exclusive interviews with cast members like Jenna Fischer and Angela Kinsey to exciting Office Ladies podcast coverage, Easter eggs, and more, here are 15 must-read articles for anyone who considers themselves an Office superfan.1. Why we're still obsessed with The Office more than 15 years later

On March 24, 2005, the U.S. adaptation of Ricky Gervais and Stephen Merchant's British mockumentary-style comedy premiered on NBC. In celebration of the show's 15th anniversary, Fischer and Kinsey spoke with Mashable about The Office's present-day popularity, current reunion reboot plans, the one episode that never got made, and what is so obviously their favorite thing to have come from this whole life-changing experience: The friendships.2. The Office fansite that the cast actually obsessed over

In the early days, when The Office was struggling to escape the shadow of the British version, establish a fanbase, and earn ratings worthy of future season renewals, the cast members, writers, and showrunners turned to the internet for help. Stars of The Office who've become household names over the past 15 years B.J. Novak, Jenna Fischer, Angela Kinsey, and Kate Flannery would directly communicate with fans on Myspace in hopes of growing the show's audience. Among those fans was Jennie Tan, creator of OfficeTally.com, an Office fansite that became a one-stop source for show-related interviews, behind-the-scenes details, and impassioned weekly discussions.OfficeTally wasn't just for fans, though. Nearly everyone who worked on The Office religiously checked the site. The show's writers took OfficeTally's comment sections to heart, and the on-site feedback notably influenced the series. In an interview with Mashable, Tan explains how the site helped shape Jim and Pam's relationship, convinced NBC to supersize a few episodes, and even led to her two guest roles on the show. 3. The Office hairstylist Kim Ferry shares stories from her "best job ever"

Kim M. Ferry worked as a member of The Office's hair and makeup crew for eight seasons. She's the woman who perfected Pam's signature curls, the person who had the honor of massaging peanut butter all over Steve Carell s head in Season 4's "Night Out" episode, the mastermind behind the wigs you saw throughout the series, and so much more. Mashable spoke with Ferry about her time on The Office and the most memorable hair moments from the series.4. 20 background details you definitely missed on The Office

Did you know hilarious messages appear on the white board in "The Office?"

Since Fischer and Kinsey launched their Office Ladies podcast in October 2019, they've shared countless behind-the-scenes stories, filming memories, and revelations from the show. If you're not an avid Office Ladies listener, don't worry. I've been keeping track of all the best details and background observations that fans might have overlooked. From unfamiliar background actors and complex props to hidden messages and more, here are 20 super interesting details on The Office you probably missed while watching the show.5. The Office: 10 best behind-the-scenes revelations from new book

Steve Carell as Michael Scott in "The Dundies."

The Office The Untold Story of the Greatest Sitcom of the 2000s: An Oral History is written by Andy Greene, a senior writer for Rolling Stone and the Office expert who gave the world an oral history of the show's "Dinner Party" episode back in 2018. Greene conducted a whopping 86 interviews for his book, which weaves in archival material, past show-related interviews, and quotes from DVD commentaries. The end result is a masterful, captivating story of The Office's nine-season run on NBC that will give fans a deeper understanding of what it was like working on the show and offer a heavy dose of nostalgia. You should absolutely read it in its entirety, but for now, here are 10 best behind-the-scenes revelations from the book.6. 15 best tidbits from Brian Baumgartner's Office oral history, Welcome to Dunder Mifflin

Speaking of books, add Brian Baumgartner's Welcome to Dunder Mifflin to your reading list. It features a forward by showrunner and comedy mastermind Greg Daniels, and it draws from hundreds of hours of interviews with cast and crew members, writers, and directors. You may recognize conversations from Baumgartner's An Oral History of The Office podcast, but something about reading stories about a fictional paper company on paper hits different. Trust me. To give you a taste of what's to come, we compiled a list of 15 tidbits from the oral history that you can read while impatiently waiting for your own copy to arrive. Buckle up and prepare to learn about everything from Daniels' grandparents to Barack Obama fan mail.7. The 65 absolute best moments from The Office

Yes, there are several Christmas shoutouts.

From entire episodes like "Dinner Party," to small but hilariously written and acted cold opens like the time Kevin spilled his chili we present a comprehensive list of 65 best moments from The Office.8. The Office cast members share their favorite cold opens

In honor of The Office's 15th anniversary, Jenna Fischer and Angela Kinsey spoke with Mashable about the show's enduring legacy, a potential reboot, and their podcast, Office Ladies. The two also shared their favorite cold opens of the series. Spoiler alert: They're some of the show's best.9. Every single cold open from The Office in one convenient place

Speaking of cold opens, we've gathered every single cold open from Season 2 through 9 of The Office in one convenient place. Before you get mad, Season 1 didn't have any cold opens. Thanks to the official Peacock YouTube channel which has been uploading the hilarious show intros season by season you can now easily binge the cold opens whenever your heart desires, even if you don't have a Peacock Premium subscription.10. 50 revelations about The Office from the Office Ladies podcast

Mashable has been diligently covering the Office Ladies podcast since it launched in October 2019, so we've learned hundreds of new Office facts over the years. We took a look back at our archive and pulled some of the most interesting tidbits to create a Megalist like Dwight's Megadesk but list form, with links to more details of 50 revelations from the podcast that every Office fan can appreciate. Enjoy!11. Jim and Pam's first kiss happened at Chili's and that's that on that

Merriam-Webster defines "kiss" as "to touch with the lips, especially as a mark of affection or greeting." By the very definition of the word, Jim Halpert and Pam Beesly's first kiss occurred in Season 2, Episode 1 of The Office, "The Dundies." If you think Jim and Pam's first kiss was in the Season 2 finale, "Casino Night," I get why, but you're wrong. Read our thorough, extremely convincing argument above.12. How the iPod video helped save The Office

Before Peacock, "The Office" was basically Team Apple.

The fate of The Office was in constant question during the first and second seasons, but thanks to some help from Apple and the launch of the 5th Generation iPod Classic aka the iPod video , the series survived and began growing its fanbase. Read how The Office's relationship with Apple, which formed after the Season 2 episode, "Christmas Party," helped save the show.13. The Office stars finally reveal the identity of Jan's sperm donor

At long last, the father of Jan's baby who, as we know, is definitely not Michael Scott has been revealed. And he's...famous. Nope, it's not Kevin Malone. But the real revelation is perhaps even more shocking.14. The Office almost had a very different theme song: A legendary pop hit.

The intro vibes would be totally different.

The Office has one of the most beloved, catchy, unique theme songs in TV history. But did you know that the opening credits were almost set to a popular '70s hit? Fischer and Kinsey briefly shared the story behind the show's theme song in 2020. But on a recent episode of the Office Ladies podcast, the two dove deep into the theme song selection process. You're gonna want to hear this.15. All 185 episodes of The Office, ranked

Can't get enough of The Office? Understandable. Same. Read through our exhaustive, impressively comprehensive ranking of every single episode. Yes, all 185 of them. Lord, beer you strength.