'The Unbearable Weight of Massive Talent' review: This Nic Cage movie should be so much wilder 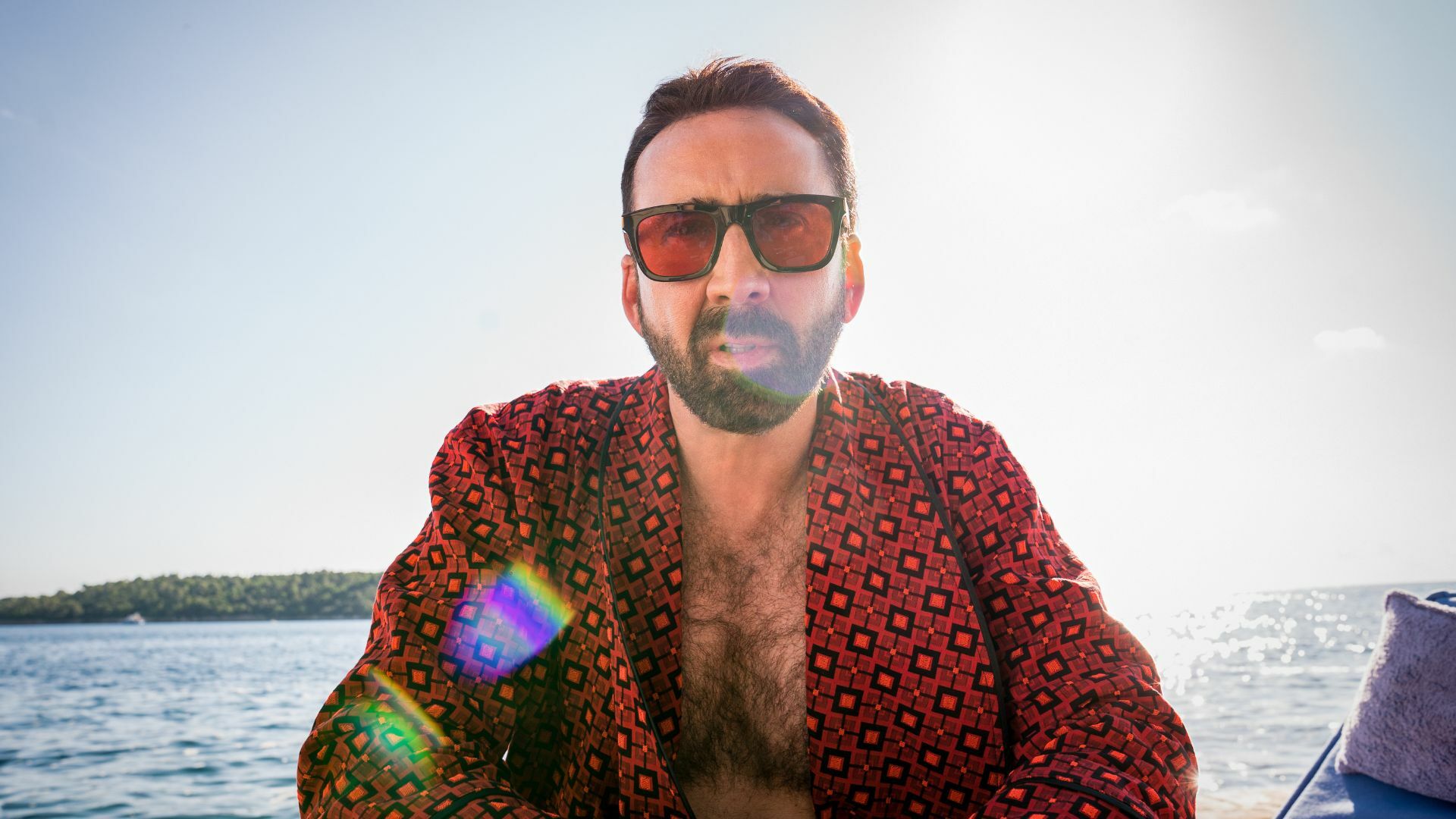 Get the Full StoryHow do you capture what it means to be Nicolas Cage? This is the daunting task writer director Tom Gormican put upon himself in creating the meta-action-comedy The Unbearable Weight of Massive Talent, in which the notoriously cash-strapped A-lister takes a dodgy celebrity appearance gig and bumbles into international espionage. This premise seems ripe for the kind of outrageousness fans crave from Cage. So why is it so underwhelming?Nicolas Cage is so much more than an actor, so much more than a movie star. Working onscreen for 40 years, he's become an icon, a meme, and a way to gauge exactly what kind of movie fan you're dealing with. A Cage Gauge, if you will. He's made mainstream adventure blockbusters like National Treasure and The Rock, but also earned Oscar attention for daring dramas like Leaving Las Vegas and Adaptation, in which he memorably played twins. To action fans, he's practically a patron saint, having appeared in a LONG list of movies some spectacular, many subpar but still boasting a sprinkling of Cage magic. He's become a gift to filmmakers who want to push the boundaries, delivering deranged and devastating performances in movies like the psychedelic thriller Mandy, the post-apocalyptic action-comedy Prisoners of the Ghostland, and the haunting yet oddball vengeance drama Pig. All this is to say, there may be no way for one movie to properly appreciate Nicolas Cage in full. So maybe The Unbearable Weight of Massive Talent was doomed to be disappointing.Nic Cage plays himself in an action-comedy with a spy twist

Scripted by Gormican and Kevin Etten, The Unbearable Weight of Massive Talent imagines Cage as a middle-aged actor desperate for work and money. We follow Nic on a pitch meeting, where his intense enthusiasm for a meaty role pushes him to public embarrassment. So, when his agent Neil Patrick Harris playing Barney Stinson Lite tells him a super-rich super-fan is offering big bucks for him to attend a birthday party in a far-off mansion, Nic reluctantly agrees. But there's more to super-fan Javi Pedro Pascal, firing on all goofy cylinders than what his silly grin and cinematic obsessions suggest. FBI agents The Afterparty's Tiffany Haddish and Ike Barinholtz inform Nic that Javi is a kidnapping kingpin who has ruthlessly abducted a president's daughter to sway an upcoming election. It's up to Nic to channel his acting ability into an undercover mission to trick Javi into giving up the location of the stolen girl.

The "eccentric everyman is pitched into an extraordinary save-the-day scenario" is in keeping with the kind of movies Cage made in the '90s with the likes of John Woo, Simon West, and Michael Bay. However, Gormican is not an action auteur. His only previous directing effort was the 2014 buddy-comedy That Awkward Moment, in which the biggest stunt was Zac Efron and Miles Teller urinating while planking on a toilet. Little surprise then that the action scenes in this Nic Cage action movie have no pizzazz. Sure, they're mostly played for parody with Cage and Pascal comically crawling over low-lying walls, clumsily imitating a Gone in 60 Seconds getaway, and bickering over footwear while fleeing sprays of gunfire. But the humor here would hit harder if Gormican could actually pull off the action aesthetic he's mocking.

Unbearable Weight is mediocre in action and comedy

Similarly, the insights into Hollywood are shallow. There's the requisite double-speaking agent, the indignities of auditioning, and tired jokes about the industry and celebrity excess. None of it feels fresh or remotely challenging, which feels like a failure, as Cage has been challenging audiences for decades. Yes, he's made mainstream movies, but he's given performances that rattle us in our seats. He's been unapologetically raw and weird and over the top, and in that, tapped into a side of human emotion that is gloriously messy. Here, however, Gormican plays firmly to the middle of Cage's appeal. So a passionate monologue about the wonders of a 1920 German silent film is balanced by multiple scenes praising the modern-day mainstream masterpiece that is Paddington 2. Cage's mystique is made mundane by presenting him as a loving but flawed father, who embarrasses his cool teen daughter Lily Mo Sheen . He's world-weary, needing to be prodded into action by his #1 fan and the spy plotline, which becomes frustratingly predictable as Gormican hits cliches with more abandon than he drops movie references.

Every movie name-dropped in 'The Unbearable Weight of Massive Talent,' and where to watch them

The wildest device in The Unbearable Weight of Massive Talent is that Nic gets pep talks from an imaginary younger version of himself, whom he calls Nicky also played by Cage . Where Nic sulks over a meeting that ended in a whimper, Nicky is fired up, flipping his floppy hair and wiggling in his leather jacket and yelling the reminder that they are " Nic fuckiiiiiiiiiiiiiiiiiiiing Cage!" With some CGI smoothing, Cage is made to look younger, perhaps harkening to the '80s, when he was firing audiences up as the hot-tempered stud of Moonstruck or the voracious creep of Vampire's Kiss. In theory, this collision of young, brash, and unconquerable Nicky and old, sullen, defeated Nic should be fun to watch and emotionally powerful, reflecting in dramatic contrast the battle so many of us face looking back on who we were and who we are. But Gormican's movie doesn't have the depth for that. This isn't JCVD, where past-his-prime action-hero Jean-Claude Van Damme looks back on his life with the regrets of a Shakespearean tragic hero. But neither is Unbearable as outrageous as other movies where big stars poked fun at their personas. This Nic Cage as Nic Cage movie is shockingly tame

The Unbearable Weight of Massive Talent lacks the balls of Kiss Me, Stupid, a 1964 Billy Wilder sex-comedy in which Dean Martin played a hilariously horny version of himself. Unbearable doesn't contain the courage of Harold and Kumar Go to White Castle, where Neil Patrick Harris gleefully lampooned his clean kid-star reputation to play a wild degenerate who craved drugs, sex, and mayhem. But most frustrating of all, this movie a movie where Nicolas Cage plays himself lacks the weirdness of Being John Malkovich, where the eponymous star of stage and screen became the jumping-off point for a surreal adventure that questioned not only his identity but the meaning of identity itself! Nic Cage playing himself is such a stupendous launchpad for adventure that we'd called The Unbearable Weight of Massive Talent one of our most anticipated movies of 2022. But it's become a stupendous disappointment because the movie itself is just OK. Bits of Haddish fangirling over Croods 2, Pascal bursting with boyish enthusiasm over meeting his hero, or Cage pondering if his next act might be as a spy are funny enough to make audiences chuckle. The movie references are plentiful, urging nods of recognition, but rarely so niche that they'll alienate anyone. Cage is compelling, but that's a given. I wish he'd been given more to dig into.

Gormican lacks the originality and insight to do anything more than the expected with this premise. The action is serviceable, but not memorable. The jokes are similarly mediocre, depending on the bravado of its stars to bolster them. And, yeah, man, Cage has done more for lesser movies. But when the lure of CAGE AS CAGE is so strong, I wished the movie would pull me in so much more than it did. The Unbearable Weight of Massive Talent has one of the greatest and most daring performers of a generation at its center. But instead of living up to Cage's level, it just coasts on his chaotic charm. The Unbearable Weight of Massive Talent is now in theaters.