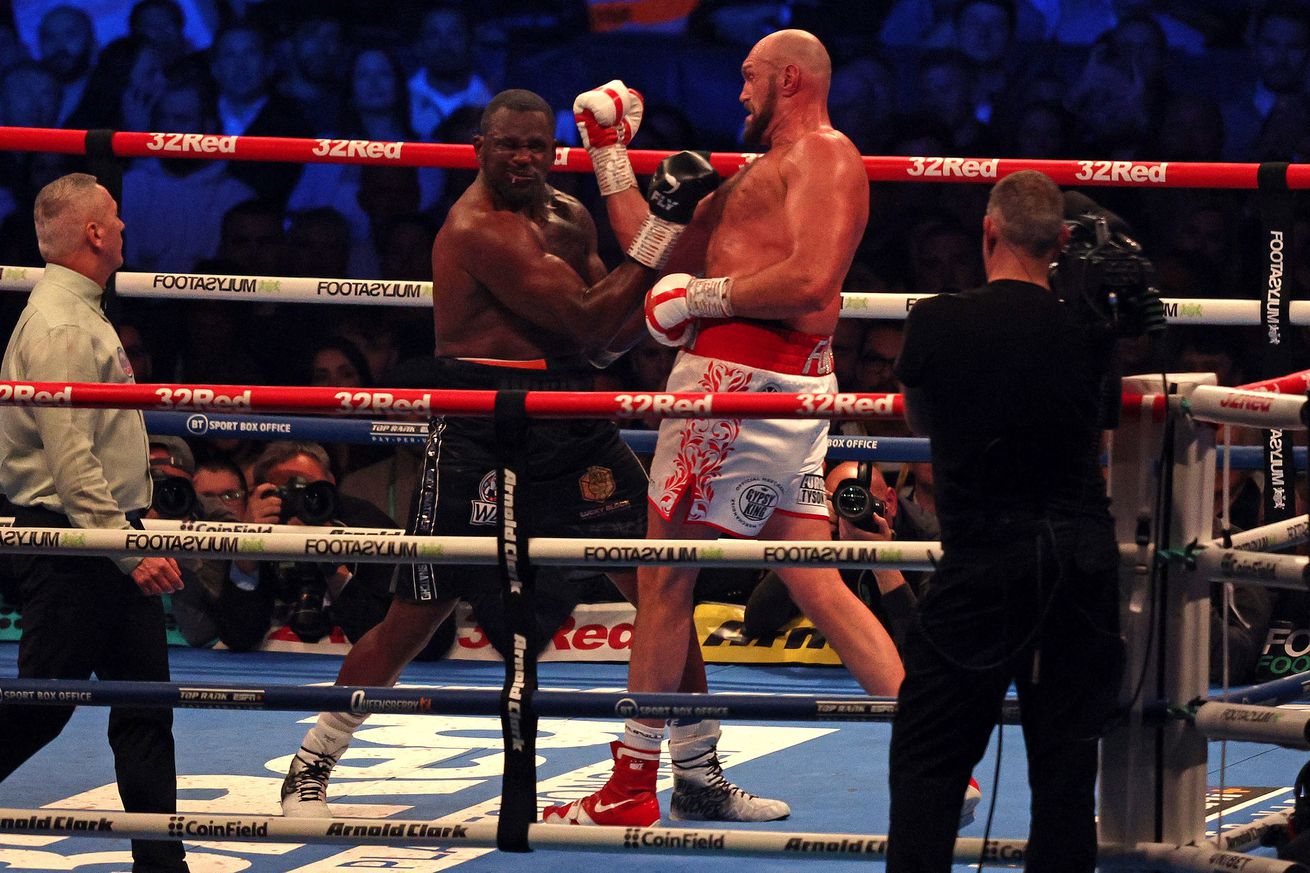 Get the Full StoryThe Tyson Fury uppercut that put away Dillian Whyte. Photo by ADRIAN DENNIS AFP via Getty Images

Tyson Fury laid out Dillian Whyte with one vicious uppercut. The Gypsy King is still atop the heavyweight throne.

In what was teased as his farewell fight in professional boxing, Tyson Fury 32-0-1, 23 KOs sparked out Dillian Whyte 28-3, 19 KOs with a wicked uppercut in Round 6 to retain his WBC heavyweight title. Fury was up on the scorecards at the time of the stoppage and had otherwise showed his superiority in what was a bit of a rough, stop-start championship match in front of over 90,000 fans at Wembley Stadium in London.

This was Fury s first fight since his trilogy KO win over Deontay Wilder in Las Vegas, and the British crowd showed up in droves to witness this homecoming.

Whyte curiously went southpaw in the opening round, with Fury doing the same in round two. Dillian did go to the body often as was expected against Fury, but Fury had his own body work and was clearly the more varied and skilled boxer. Whyte was swinging haymakers and throwing himself out of position, whereas Fury was landing jabs and 1-2s and being wiser with his punch selection. Things got chippy with all of the headbutting, rabbit punching in the clinch, and the referee had to admonish both fighters for dirty behavior.

It was clear as the fight progressed that Fury was in full control, and the uppercut that ended it was a thing of beauty.

Official result: Tyson Fury def. Dillian Whyte by KO at 2:59 of Round 6 to remain the WBC heavyweight champion

While an undisputed unification bout between Fury and the winner of Oleksandr Usyk vs. Anthony Joshua would be fantastic, it looks like he really is intending to retire.

I think this is it, it might be the final curtain for The Gypsy King and what a way to go out, Fury said in the post-fight interview.

However, not competing in high-level pro bouts doesn t mean he d be completely done with boxing. UFC heavyweight champion Francis Ngannou was brought into the ring and he said to ESPN s Bernardo Osuna, We re going to find out who s the baddest motherf-cker.

Ngannou is currently on the mend after knee surgery following his decision win over Ciryl Gane at UFC 270. Will we ever see even a special hybrid rules fight between these two? Never say never, I suppose.

"Definitely sometime next year. 2023. That fight will happen!""Tyson Fury vs. Francis Ngannou in Africa. The Rumble in the Jungle 2!" francis_ngannou is adamant the Tyson_Fury fight will happen! #FuryWhyte pic.twitter.com h4wuQGGsvO UFC on BT Sport btsportufc April 23, 2022