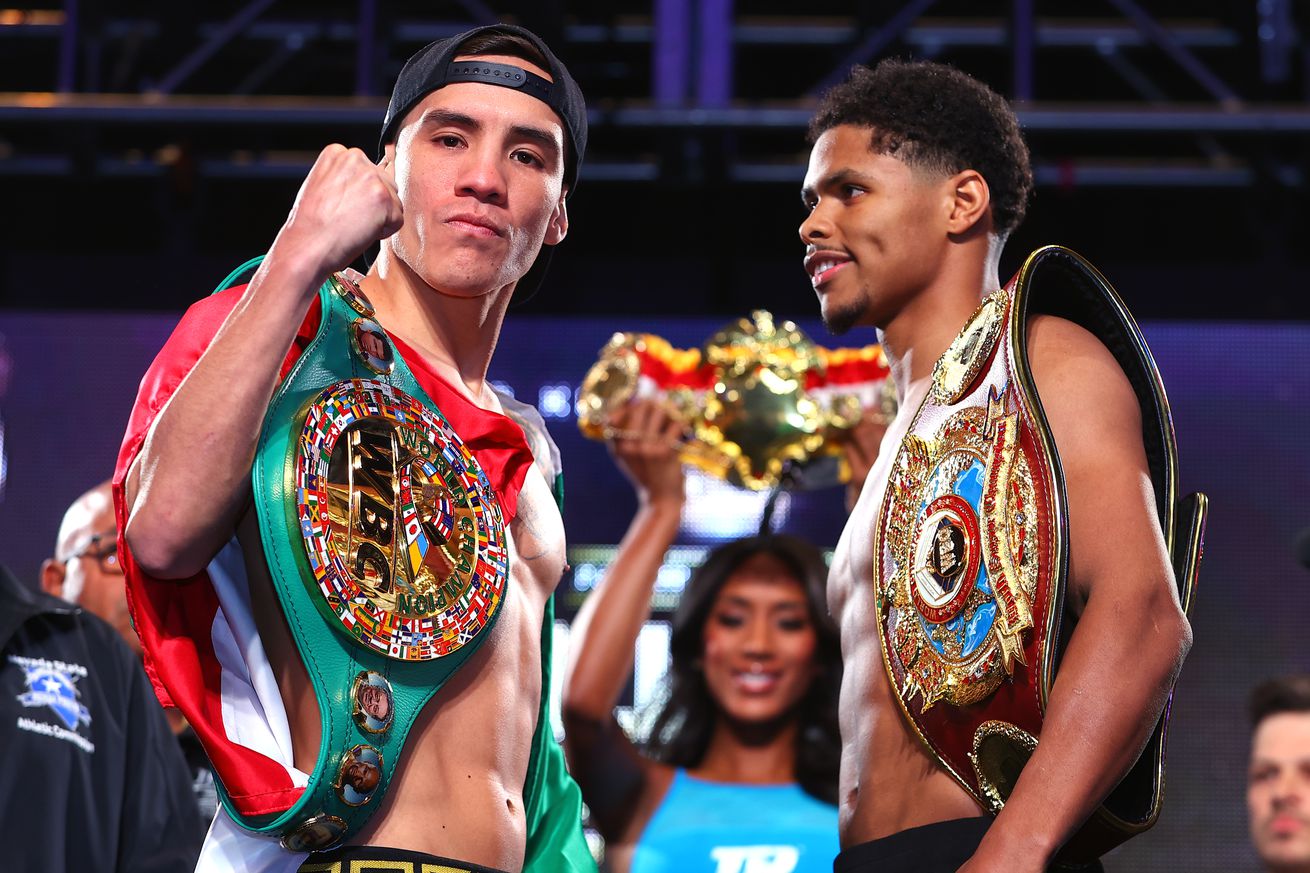 Get the Full StoryOscar Valdez L and Shakur Stevenson R face-off during the weigh in prior to their WBC and WBO junior lightweight championship at MGM Grand Garden Arena on April 29, 2022 in Las Vegas, Nevada. Photo by Mikey Williams Top Rank Inc via Getty Images

What a Saturday night in boxing. While Katie Taylor and Amanda Serrano are the center of attention in the boxing world in New York, there is another huge match taking place on the other side of the United States.

At the MGM Grand in Las Vegas, WBC junior lightweight champion Oscar Valdez 30-0, 23 KOs takes on WBO champion Shakur Stevenson 17-0, 9 KOs in a highly anticipated unification bout that doubles as a compelling clash of styles. Stevenson has soared to a -750 favorite on DraftKings Sportsbook but this fight is not a mismatch on paper; a lot of money is being slapped down on Shakur.

Valdez developed a reputation for being an all-action slugger, sometimes to his own detriment. He won the vacant WBO featherweight title over Matias Rueda, and while his subsequent title defenses were hardly against great opposition, he put himself in dangerous spots against Genesis Servania and an overweight Scott Quigg. Servania knocked him down before getting dropped himself and losing a decision, while Quigg broke Valdez s jaw in what was an insanely entertaining 12-round slugfest.

We could ve seen Valdez against Stevenson at featherweight, but the Mexican vacated his belt and went up to 130 lbs and along the way hired Eddy Reynoso as his lead trainer to help tighten up his porous defense. Needless to say, his junior lightweight debut against 11th hour replacement Adam Lopez proved nearly disastrous, as he suffered a hard knockdown but rallied to get a pretty iffy TKO. A blowout over Jayson Velez set up a title shot against WBC champion Miguel Berchelt in an all-Mexican battle last year in Top Rank s bubble. Valdez put on the best pure boxing performance of his career and capped off a brilliant display with a terrifying KO.

Controversy ensued ahead of his title defense against Olympic gold medalist Robson Conceicao; Valdez popped for the banned stimulant phentermine but was allowed to compete anyway. Why? The fight was taking place on tribal territory in Arizona, and their commission follows WADA guidelines which prohibit stimulants in-competition only. Valdez won a decision over Conceicao with scorecards that were way wider than the fight was, and with the argument Conceicao could ve gotten a win.

Stevenson won Olympic silver in 2016, turning professional in 2017 as a decorated amateur with the type of ability that justified not giving him the typical slow-build approach to becoming a contender. When Valdez vacated his WBO title in 2019, Shakur prevailed over Joet Gonzalez by unanimous decision to win his first world championship.

It didn t take long for Stevenson to drop the belt and move to 130 lbs, but the pandemic obviously limited his options for actual good fights. He demolished the overmatched Felix Caraballo, then took two tepid decisions over Toka Kahn Clary and Jeremiah Nakathila before his title shot against Jamel Herring. If Stevenson had a rep for not being too aggressive despite having gifted offensive boxing, he put on a clinic against Herring and swelled his right eye shut. The referee s stoppage in Round 10 was something of a mercy calling.

Valdez is the hardest puncher Stevenson has faced, and he s not just some crude brawler Oscar s left hook is a thing of beauty and he goes to the body well. Where I see a problem for Valdez is footwork and speed. Stevenson is exceptionally hard to hit and he s the slower of the two fighters. Shakur isn t always the most exciting to watch but there s no denying he s a very technically sound boxer with a wicked southpaw jab, lightning fast combinations, and very quick reflexes and ability to make reads to avoid eating clean shots. Stevenson isn t super powerful but he s not feather-fisted, either. What Stevenson provides is accuracy and varied shot selection.

I think Valdez will be a little more cautious so as not to get countered a bunch, but he ll have to take some chances in order to win. I believe Stevenson outboxes Valdez and wins a decision, but Valdez will have his moments... just not enough of them.

Nico Ali Walsh 4-0, 3 KOs , the grandson of Muhammad Ali, takes on Alejandro Ibarra 7-1, 2 KOs in a 4-rounder to open the main broadcast. I won t beat around the bush: Ali Walsh isn t very good and his lack of an amateur background makes it understandable. He s just got a famous father but there s no upside to him to suggest world-class boxer.

As for who could be a world-class boxer? 2020 Olympic silver medalist Keyshawn Davis 4-0, 3 KOs is one of the best prospects in the sport. He ll take on Esteban Sanchez 18-1, 8 KOs in a lightweight matchup that will serve as another measuring stick for how quickly Top Rank should push Davis up the ladder. Davis is a phenomenally fast and talented boxer with sweet hands, punishing body blows, and fluid body movement. I believe the 23-year-old has what it takes to be a world champion by the end of 2024. He s that good.

Valdez vs. Stevenson airs live on ESPN and ESPN at 10 PM ET 7 PM PT, with the ring walks scheduled for 11:15 PM ET 8:15 PM PT. Thankfully this will not conflict with Taylor vs. Serrano which should end before this main event begins.