Boxing Preview: Canelo looks for another title at 175 lbs 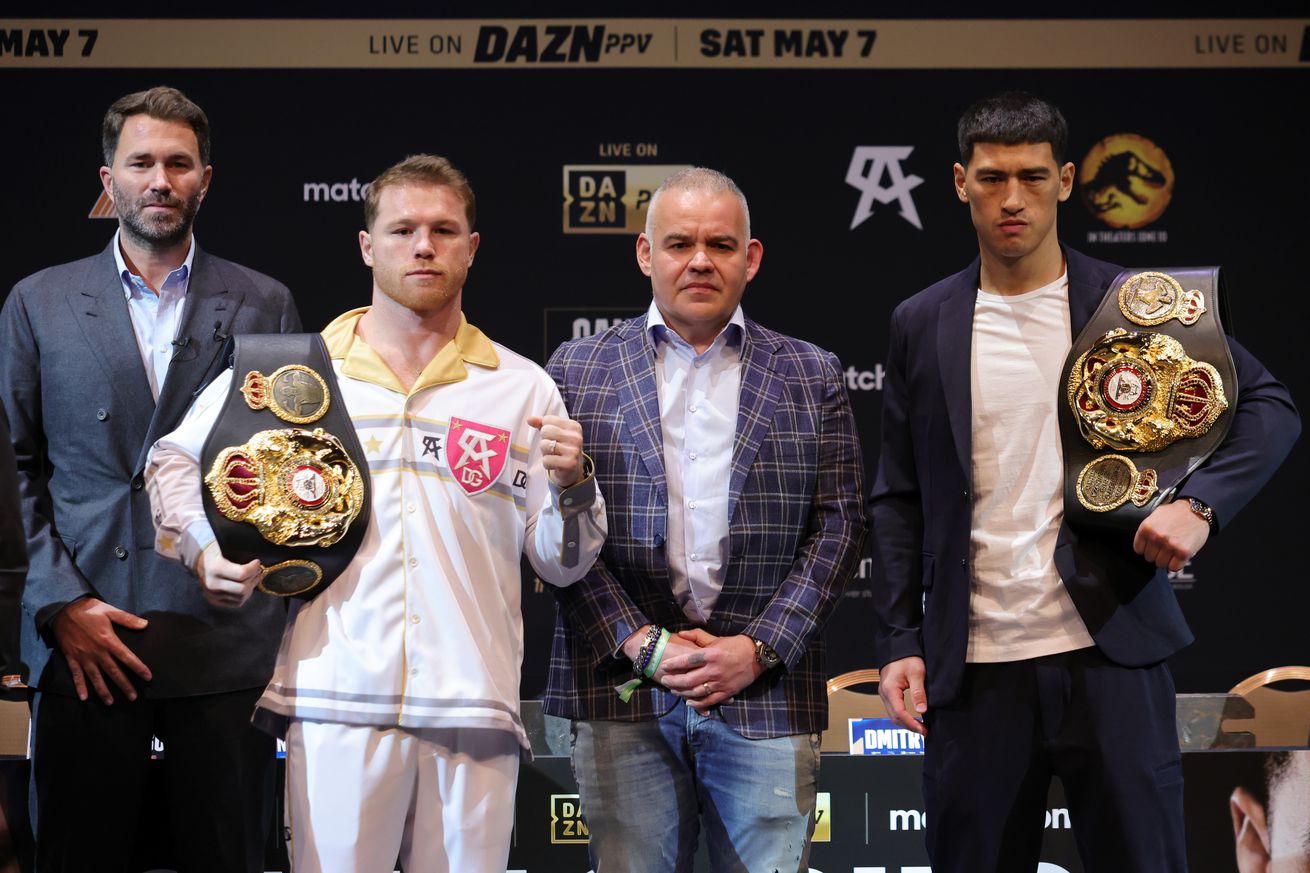 On May 7th, Canelo Alvarez 57-1-2, 39 KOs plays the role of title challenger to WBA light heavyweight champion Dmitry Bivol 19-0, 11 KOs . We ve seen Alvarez unify the super middleweight division, and we ve seen him compete and win a title at light heavyweight before, but he has his eyes on being an undisputed champ at 175 lbs to add to his remarkable legacy. Standing in his way is Russia s Bivol, a terrific amateur who didn t need a lot of time as a professional to turn into a world champion and among the best in his division.

Oh yeah, and lest we forget that this event is DAZN s pay-per-view debut. So much for the death of pay-per-view.

Alvarez s lone venture up at 175 lbs was a brutal knockout of Sergey Kovalev in November 2019. It was a close, largely uneventful fight through 10 rounds before the Mexican superstar went scorched Earth on Kovalev and put him out cold with a wicked right hand. Kovalev may not be the gold standard for boxing s best chins, but that KO proved Canelo s power could translate at a weight class that high.

As for what he accomplished in 2021, let s just say there s a reason why he was the consensus Boxer of the Year. After winning the WBC and WBA super middleweight titles against Callum Smith in late 2020, Alvarez made up for lost time due to the pandemic and his Golden Boy lawsuit with three fights over a span of nine months. He had a comfortable, routine title defense over mandatory challenger Avni Yildirim, followed that up with a TKO of WBO champion Billy Joe Saunders after fracturing the Englishman s orbital, and then took the IBF title away from Caleb Plant to cement himself as the undisputed king at 168 lbs.

Bivol amassed a 268-15 record as an amateur, winning multiple gold medals at various European youth championships and a bronze at the 2008 Youth Worlds in Mexico. He turned pro in 2014, and with wins over Felix Valera, Robert Berridge, and Cedric Agnew he raised eyebrows in just 11 pro fights. Bivol won the WBA interim light heavyweight title over Valera in his 7th pro bout and was eventually promoted to full champ status.

Among Bivol s wins in his title defenses are former champion Jean Pascal, current WBO champion Joe Smith Jr who s really the only man to hurt him , Isaac Chilemba, and Sullivan Barrera. Bivol fought twice in 2021 and scored decision wins over Craig Richards and Umar Salamov, but one thing to note about his recent victories is that they ve all gone the distance. You have to go back to the Barrera fight in 2018 for Bivol s last win by knockout.

Bivol s lack of knockouts shouldn t dissuade anyone from thinking he s not an elite fighter. He is at least the 2nd best light heavyweight in the world behind Artur Beterbiev, and for all we know he might be #1 since we ve yet to see Beterbiev against Dmitry. Bivol has an excellent jab, accurate punching, and he s great at dictating the tempo of the contest. He s also pretty difficult to hit cleanly and doesn t take too many needless risks just for the sake of it.

Canelo continues to get better even for someone who s been boxing at a professional level for 17 years. The Alvarez jab is a thing of beauty but he really gets to his opponents with wicked left hooks, sharp uppercuts, and a consistent commitment to working the body. Bivol is not much of a body puncher and if he s going to try and win rounds by just head-hunting Alvarez, he s not going to succeed. The methodical approach by Bivol could actually be better than trying to go for the knockout against an iron-chinned opponent, but it could make for a bit of a disappointing fight.

One key thing we ll see re Bivol is how he ll react to Alvarez s pressuring style. When Canelo is on the front foot he creates all sorts of problems for most of his opponents, and Bivol hasn t been really tested against that level of skill and power to date.

I believe Alvarez will be troubled at times by Bivol s timing and footwork, but he s just the more consistent offensive fighter and that s going to win over the judges. Canelo is going to have the more telling offense and he ll respond to Bivol s ramrod jab with his own jab and then some.

DraftKings Sportsbook has Canelo as a -475 favorite to Bivol s 350 underdog tag, which seems about right for this matchup.

What s on the undercard?

Not a ton, to be honest. Or at least not on the main PPV broadcast. I d pay attention to junior welterweight Montana Love 17-0-1, 9 KOs against Gabriel Valenzuela 25-2-1, 19 KOs . Love has emerged as a potential contender at 140 lbs after his stoppage wins over Ivan Baranchyk and Carlos Diaz.

Unbeaten Uzbek Shakhram Giyasov 12-0, 9 KOs returns to action against Christian Gomez 22-2-1, 20 KOs in what could be the most entertaining bout on the undercard. There was supposed to be a heavyweight title eliminator between Filip Hrgovic and Zhang Zhilei, but Hrgovic withdrew following the recent passing of his father. Zhang 23-0-1, 18 KOs instead will take on Scott Alexander 16-4-2, 8 KOs in a 10-rounder that s no longer a title eliminator.

You can catch Canelo Alvarez vs. Dmitry Bivol live on DAZN PPV in the United States and Canada at a cost of 59.99 for subscribers 79.99 for non-subscribers . If you have DAZN in other territories except Mexico where it s free on TV ... no PPV for you! It s part of your subscription. The start time of the main card is 8 PM ET 5 PM PT, with ring walks at around 11 PM ET 8 PM PT.