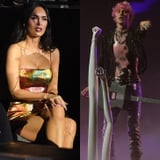 Get the Full StoryMegan Fox consistently shows up to support fianc Machine Gun Kelly at his performances and premieres. Most recently, she was in attendance at his recent tour stop at FTX Arena in Miami, FL. Fox, who coordinated with the musician in a red latex Sportmax dress at the premiere of his new "Taurus" film just days before, sat in a closed-off section at the International Mainstream Sellout show. For the concert, she chose to wear an iridescent, multicolor minidress that featured a micro hemline and thin spaghetti straps.

The '90s-inspired slip had gold metallic threading over a warm-toned brushstroke pattern, and Fox finished her outfit with a lavender manicure, matte ruby lip, and rosy cheeks. The bold shine effect on her dress was reminiscent of the sequined co-ords that MGK wore onstage. Instantly conjuring images of the gold Area sequin minidress she wore for her 36th birthday in Las Vegas, as well as some of the evening wear items from her Boohoo 2.0 collection, the design is fits right in with her current wardrobe, which her good friend Maeve Reilly regularly helps curate. Ahead, shop several minidresses that are similar to Fox's, then check out her recent date night look of split-hem jeans and Bottega Veneta heels. And if that's not enough for your Fox fashion fix, you can always reminisce about the gothic Zuhair Murad gown she wore when the couple traveled to Italy for Kourtney Kardashian and Travis Barker's wedding in May, or revisit the blue rhinestone jumpsuit she cut a hole in after the Billboard Music Awards.