Joe Jonas Gets Grilled in This Lie-Detector Test 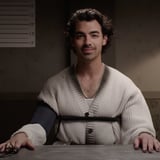 Get the Full StoryHonesty is a virtue, and it's one Joe Jonas is clearly blessed with. On June 16, the Jonas Brothers singer and songwriter sat down with Vanity Fair to take its infamous lie-detector test, sharing his honest opinions on everything from his favorite member of One Direction to whether he's still mad at Diplo for livestreaming his Las Vegas wedding.

Starting off strong, Jonas began by answering questions about his Disney Channel roots before commenting on his status as a "short king" when it comes to being around wife Sophie Turner. "Is it hard to unlearn the Disney Channel method of acting?" the interviewer asks. "It was . . . you just have to do the opposite of whatever your instinct would be from a Disney Channel day, which is everything," he says, putting on his best Disney voice for the camera shortly afterward.

Jonas also reveals that he has thrown his purity ring - accessories all three Jonas Brothers members were famous for wearing - in the trash. "Do you think it's creepy how much you were asked about your virginity as a teenager?" the interviewer asks in reference to the rings. "It's pretty creepy, thinking back on it now," he admits. "That sh t wouldn't fly now, but for some reason, it did back then."

"I will happily take the short-king trophy."

"Do you consider yourself a short king?" the interviewer asks. This time, Jonas laughs before answering. "Ah, that's a very slight height difference," he says, looking at a photo of himself and Turner at the 2022 Vanity Fair Oscar Party. "She was in heels!" he adds, only slightly defensively. "Me and my wife have had this debate for a long time now that I like to make her mad by making her think that we're actually the same height, because we're pretty close to it when we're not wearing shoes," he says. "But to answer your question, I will happily take the short-king trophy."

Watch Jonas's full lie-detector test to see what he had to say about the inspiration behind his iconic Jonas Brothers hair, celebrity dating apps, and sliding into his wife's DMs.