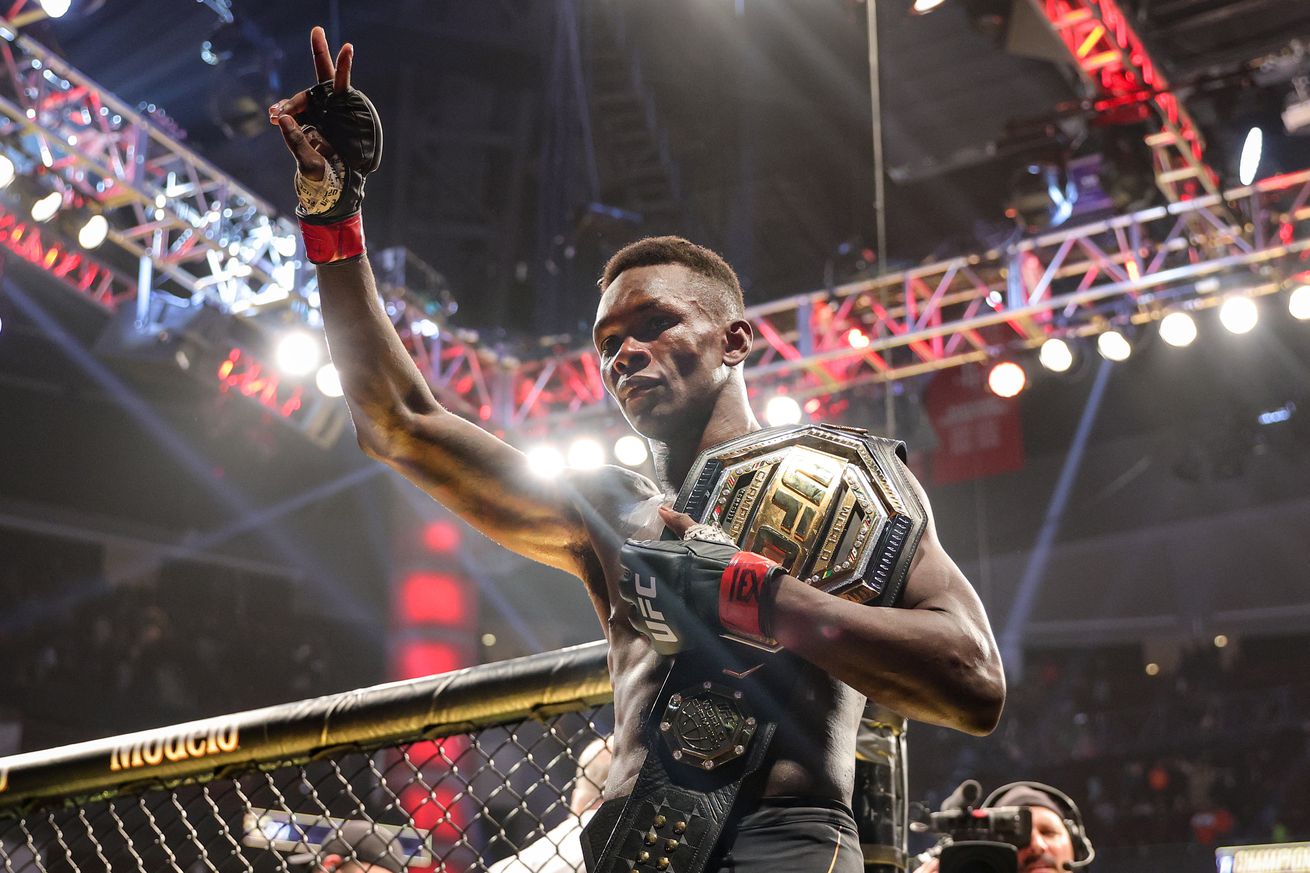 Get the Full StoryPhoto by Carmen Mandato Getty Images

A detailed breakdown of the position-by-position statistics to watch out for in Saturday s UFC 276 fight card from Las Vegas. UFC 276 goes down Saturday night in Las Vegas where The Last Stylebender Israel Adesanya will put his title and 11-fight middleweight win streak on the line in the main event against Jared Cannonier, who s won five-of-six since dropping down from light heavyweight.

We aren t going to waste any time with the co-main event today. While it should be an amazing scrap, do you really need pre-fight stats for the Volkanovski-Holloway trilogy? And if you haven t yet seen their first two fights, you re dead to me.

We ll also throw in some numbers for two other fun-looking matchups: O Malley-Munhoz and Lawler-Barberena. Remember, what you re about to read are not official UFC statistics. They re alternative stats generated from official statistics designed to 1 give more weight to the recent present than the distant past and 2 not let one huge or horrible performance dominate the data. See the notes at the bottom for definitions of certain statistics.

Adesanya will step into the Octagon this Saturday for the fifth defense of his middleweight title. In terms of statistical dominance, he s had two pretty clean defenses, then Yoel Romero was his closest and his recent Robert Whittaker rematch came in second.

The statistical story of Saturday s matchup is two guys who love to stand and trade at distance, throw similar volume and accuracy, and have mostly similar knockdown metrics, but aren t remotely the same defensively.

Izzy and Cannonier both spend around four minutes of every round operating at distance. Neither has ever even tried to shoot for a takedown, and when they clinch up, Izzy s made three unsuccessful takedown attempts while Cannonier s gone 2-of-4. With the limited time they spend in the clinch 30-40 seconds per round , it s usually because the opponent wants them there. Izzy s percentage of control time is so low it rounds down to 0 while Cannonier presses his opponents against the cage only 16 of the time. He clinches off the cage a bit more than Izzy, but both still tend to spend most of their clinch time as the one with their back grinding against the fence. And don t get me started with the ground; they re each on bottom 86-93 of the time. The questions in this fight would be how would they get there and would they stay there since they each have a very high standup rate?

Taking things back up to the distance position, both fighters throw in the range of 10.4-11.5 head jabs per five minutes in the position P5M . Izzy lands a bit more often 39 to 37 , just as he does with power shots to the head and legs, but in general his accuracy lines up pretty close to Cannonier s.

When it comes to power, they each throw between 30.8 and 31.1 strikes P5M with the main difference that Cannonier is a bit more of a headhunter than Izzy 73 to 62 . And in the knockdown department, they re very similar in two areas but dramatically different in a third.

Knockdowns can come in a variety of ways, so I like looking at a few different metrics. One asks if you dropped an opponent during a round, another looks at how often you drop opponents at distance or in the clinch off the cage, and a third metric looks at the damage your standing power head strikes do.

Izzy and Cannonier are both above average in knockdown round percentage and knockdown rate, and each of their numbers is within 5 of the other. The standout difference is knockdown percentage. This stat looks at knockdowns per power head strike landed while standing and Izzy comes out well on top here 3.9 to Cannonier s exactly average 2.3 since Cannonier more than double s Izzy s power strike output in their limited time in the clinch.

When we move to defense, the statistical game changes. Izzy doesn t take nearly as much damage as Cannonier when they re operating at distance. This is for two reasons: 1 his opponents don t attack him as often and 2 he s a bit more effective avoiding the strikes that do come his way.

Izzy s opponents throw slightly fewer head jabs at him than Cannonier 15.2 to 17.3 P5M , but the big difference is power strikes. Izzy only has to contend with 18.7 distance power strikes P5M while Cannonier has to handle 33.3. And when those strikes come their way, Izzy absorbs 35 to Cannonier s 38 . If we look at power to the head only as I like to do for a measure of defensive prowess Izzy eats 23 to Cannonier s 28 . The end result of all of this is that while they each absorb a relatively similar amount of head jabs P5M, in the power arena Izzy only eats 6.6 strikes while Cannonier absorbs 12.7 almost doubling Izzy s number.

And when those power strikes connect, Izzy s yet to be dropped. He s never been knocked down in the UFC while Cannonier s been rocked to the canvas five times so far. His defensive knockdown metrics are all worse than average with one coming in at more than double what s typical for a middleweight. But these Cannonier numbers should also perhaps be taken with a grain of salt. While he has five UFC knockdowns and has also been knocked down five times, four of his five knockdowns have been against middleweights while three of his five times getting dropped were at light heavyweight or above.

Still, the statistical lesson is clear. Izzy and Cannonier both love operating at distance and are talented and dangerous MMA strikers. But defensively, Izzy tends to reign supreme while Cannonier lags behind in a variety of areas.

Will that be the story of Saturday night? I can t wait to find out.

It s interesting, having only been credited once for what FightMetric calls damage, O Malley doesn t often make his opponents bleed, but he drops them in 33.2 of his rounds more than triple the bantamweight average and has a knockdown rate more than double that of Munhoz .

Both fighters spend over 4 of every five minutes at distance where they both throw high volume, but O Malley s efficiency and knockdown power both pop off the stat sheet like they should have some enlarging cartoon eyeballs next to them.

O Malley lands a whopping 66 of his distance power strikes. That s in the rarified air of Alistair Overeem right there. While he lands an impressive 58 of his power shots to the head, he also throws 9.5 power strikes to the body P5M and connects at an 83 clip. Those are the main two drivers of O Malley s insane power efficiency.

Meanwhile Munhoz is a solid statistical fighter. But two glaring numbers to look out for with him relate to the way he defends his head. Opponents head jabs tag Munhoz in the face 32 of the time 17 for O Malley while their power strikes rattle Munhoz brain an enormous 40 of the time 23 for O Malley .

You never know what s going to happen in an MMA fight, but Munhoz sure does eat a lot of power strikes with his face and jaw, and that s a dangerous thing to do in this sport.

Would you believe it if I told you Barberena has better knockdown metrics than Lawler?

In lifetime stats, Barberena s slightly better in two of the three metrics knockdown round percentage and knockdown rate . But in alternative stats which give more weight to more recent fights, it s not even close. Barberena more than doubles Lawler in most areas.

They both shoot for distance takedowns at exactly the same rate zero Lawler s number is so low it rounds down to 0.0 . They both attempt clinch takedowns at almost the same rate, but Lawler s finishing percentage is higher. And while these two fighters spend a decent amount of time out of the distance position about a minute in the clinch and a minute on the ground P5M they re generally being controlled when they do. They each have their back against the cage 62-65 of the time in the clinch and are on the bottom on the ground 79-82 of the time.

So if they keep out of those areas and end up in a mostly distance battle, Barberena s got the positive power strike differentials while Lawler gets outstruck basically everywhere. But who are we kidding, Lawler still seems to still be able to eat shots while dishing out tons of damage. And relative to Lawler, Barberena has been very droppable. Should be a fun scrap.

Statistical Notes: Strike attempts are per an entire five minute round in each position P5M and are categorized as jab or power. A jab is just a non-power strike. Strikes are documented based on where they land or are targeted head, body, legs , not the type that is thrown punch, elbow, kick, knee . Visible damage rate is per five minutes the fighter is not on his back. It s hard to bust up someone s face while lying on your back. Damage percentage is per power head strike and distance head jab landed. Knockdown rate is per five minutes at distance or in the clinch off the cage. Knockdown percentage is per power head strike landed while standing. It s really hard to knock someone down if they re already on the ground. Knockdown Damage round percentage is the percentage of rounds with at least one knockdown or busted up face, respectively. Clinch control is having the opponent pressed against the cage. Ground control is having top position or the opponent s back.