Questions and storylines from the UFC 279 early prelims 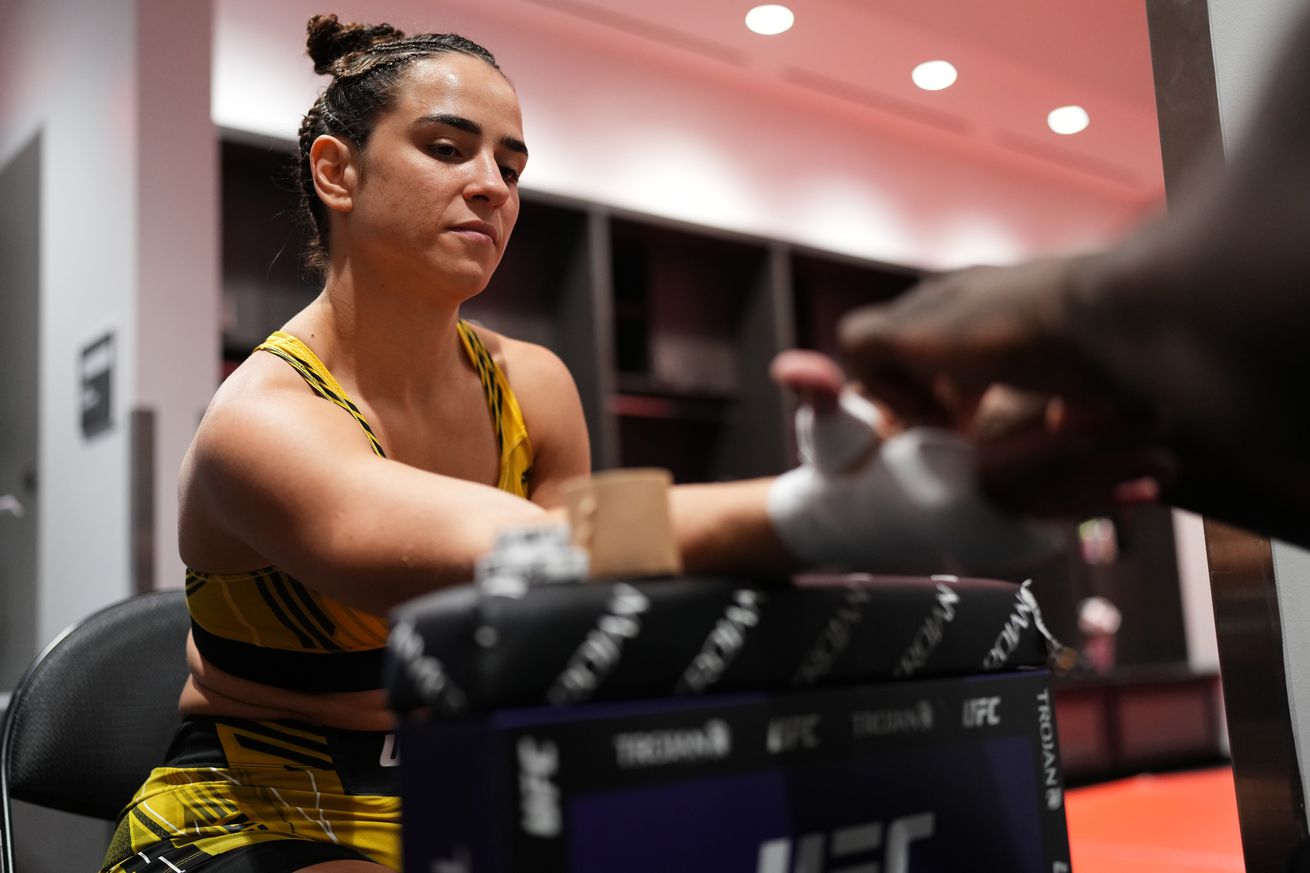 Get the Full StoryNorma Dumont faces Danyelle Wolf at the top of the UFC 279: Chimaev vs. Diaz early prelims Photo by Cooper Neill Zuffa LLC

Chimaev, who is the No. 3 ranked fighter in the official UFC welterweight rankings, risks his standing in those rankings and his unbeaten record against a fighter in Diaz who has nothing to lose. This bout marks the final fight on the unranked Diaz s contract with the UFC.

In the evening s co-main event, former interim UFC lightweight champion, Tony Ferguson looks to end a four-fight losing skid, which dates back to May 2020, with a move up to welterweight. Ferguson does not have a simple task on his hands, as he is matched up against the No. 14 ranked fighter in the division, Li Jingliang, who is coming off a July knockout win over Muslim Salikhov.

Ahead of the September 10, ESPN streaming pay-per-view even, I look at the questions and storylines to follow on the early prelim portion of the UFC 279 fight card.

Norma Dumont vs. Danyelle Wolf - Can Wolf keep the fight on the feet?

Nearly two years ago, UFC president Dana White awarded Danyelle Wolf a UFC contract. t the time, White said, Normally somebody that s 0-0 and had a tough performance like that she fought a girl that was 5-0, though, and was undefeated, and Danyelle hurt her a few times and had her running backwards and putting her head down, things you don t do unless you re getting hit really hard, so I m going to give her a shot.

Wolf was coming off a win over Taneisha Tennant on a Dana White Contender Series card when the UFC boss made his remarks. Although the win was her first pro MMA fight, it was not her first combat sports experience.

The 38-year-old she turns 29 on September 8 put together a 30-14 boxing record from 2010 through 2019. She participated in the Olympic trials in 2012 and 2016, but her weight class was not part of the Games. Her weight division 152 pounds was added in 2020, but she failed to make the cut when Briana Che eliminated her. Che made the team as an alternate after losing to Oshae Jones at the Olympic Trials. Jones went on to take a bronze medal in 2020.

Obviously Wolf, who is four inches taller than her UFC 279 opponent, Norma Dumont, is going to look to keep this fight on the feet.

Dumont had five takedowns in her first four UFC fights. I would be flabbergasted if her approach to this scrap is anything other than staying away from the stand up and getting the fight to the mat. Dumont doesn t have a UFC submission win, but she has two career victories via rear-naked choke and she is a brown belt in BJJ and that skill set could come in very handy against an opponent who only has one pro MMA bout to her name and a long list of boxing accolades.

This bantamweight matchup could be an under-the-radar banger. Chad Anheliger he shown a decent fight IQ to go along with selective aggression, strong cardio and a willingness to engage when the conditions inside the octagon are correct. Anheliger scored a third-round knockout win over Jesse Strader in February. After the fight, the 35-year-old said that his UFC debut was good for him to get his feet wet, but now that he s fighting with the promotion, he s ready to f-cking dive in. I m ready to go.

Alateng Heili opened his UFC career with two decision wins. He followed those victories with a decision setback and a draw. My criticism of Alateng following his fight opposite Gustavo Lopez was that he seemed reluctant to engage and willing to let his opponents control the pace and location of the fight.

Then came UFC Vegas 51 where Alateng went out and knocked out Kevin Croom in 47 seconds. If Alateng brings that type of aggression and energy to UFC 279, this bantamweight bout could be a banger.

Melissa Martinez vs. Elise Reed - How will Martinez look after so long away from MMA?

Melissa Martinez makes her UFC debut at UFC 279. The 25-year-old is a former Combate Americas strawweight champ, and yes, that was Combate Americas because she won that title in 2019 before the promotion rebranded to Combate Global in 2021.

With the time between fights, it s hard to know what we will see from Martinez in 2022. What we know is that she is a lifelong martial artist. Martinez began training at two, and her parents were kickboxers. Also, her brother, David Martinez, is the current Combate Global bantamweight champ.

During her time away from MMA, Martinez won a gold medal at the 2021 World Association of Kickboxing Organizations WAKO Wold Championship and graduated from National Autonomous University in Mexico City with a bachelor s degree in food chemistry. She is 7-0 in MMA with five knockout victories.

Like Martinez, Elise Reed is a former MMA champ. The 29-year-old Reed, who had a seven-fight amateur run 6-1 , won the vacant Cage Fury strawweight belt in her second pro outing. She defended that title twice before moving to the UFC in 2021. Reed is 1-2 in the UFC with knockout losses to Sijara Eubanks and Sam Hughes and a decision win over Cory McKenna.

Reed does well in open space in striking only battles. Where she struggles is well, everywhere but her striking. With Martinez s background in kickboxing, this might be the most favorable matchup Reed could get after her lopsided loss to Hughes in her last outing.

Darian Weeks vs. Yohan Lainesse - Will someone s 0 go?

What we have in the welterweight bout between Darian Weeks and Yohan Lainesse is a matchup between two fighters who have zero UFC wins. Weeks is 0-2 with two decision losses and Lainesse is 0-1 with the promotion with a KO setback.

The good news in this fight is that, barring a draw, one of these men will get their first UFC victory.